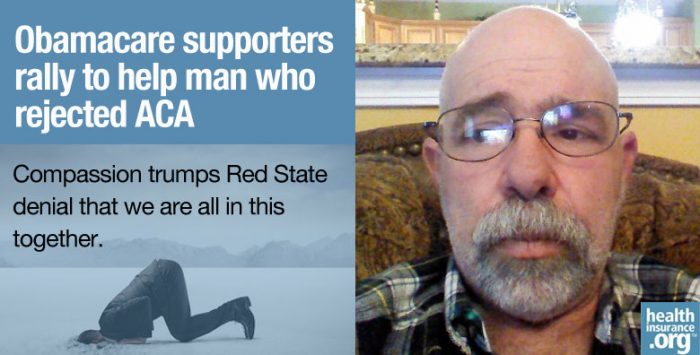 It’s beyond ironic. Obamacare faces a huge challenge to serve millions of Americans who misunderstand and distrust the new law, even in situations where ACA was specific written to help people like them. Like many other liberals, I have mixed emotions when I confront particular instances of this – for example when I see GoFundMe campaigns to finance medical care for people who avowedly oppose universal coverage.

Such episodes remind us that we need to keep two things straight. Thousands of Americans are dying needlessly every year as a result of states’ failure to expand Medicaid. It’s entirely justified to disdain the red-state politicians behind these failures, and whose scorched-earth opposition to ACA costs so many Americans so dearly. We who support health reform should not allow this disdain to spread from its justified objects to ordinary people with whom we might disagree, but who endure serious medical challenges.

Two years ago, I and many other liberals contributed to an internet fundraiser for conservative firebrand Caleb Howe, who was uninsured, suffering from liver failure, and needed financial help. I’m dismayed by Howe’s political commentaries. I don’t for a moment regret extending him this modest help. His politics are beside the point.

I was reminded of Howe’s predicament, as I ponder the blogosphere’s reaction to the predicament facing Luis Lang, a South semi-employed South Carolina handyman. Lang suffers from diabetes and has experienced other health problems. He also faces financial difficulties. He now faces serious and expensive eye problems, and he has established a GoFundMe page asking for help, which has raised more than $12,000.

From a liberal perspective, Lang is not the most sympathetic figure. He blames ACA for many difficulties that really are not the fault of health reform. He failed to sign up for coverage during ACA’s required enrollment period. Instead he “went bare” under the mistaken belief that he could obtain coverage if he became seriously ill. That’s not how ACA, or any well-functioning health insurance system, really works.

He lives in a state that has chosen to reject ACA’s Medicaid expansion, which would otherwise have covered him, given his current income. An eye doctor apparently blamed ACA for reducing his profit margins, and thus indirectly limiting the charitable care he could provide in Mr. Lang’s case. I don’t understand why this would be true, either.

TPM’s Josh Marshall tartly summarized Lang’s situation, “Lang is left in precisely the situation that would exist if the ACA had never been passed. So he blames Obama.” My healthinsurance.org colleague Charles Gaba reacted in similar fashion, in a post titled: “See man hate Obamacare. See man refuse to get Obamacare. See man whine that he can’t get Obamacare when he needs it.”

Many liberals on Lang’s GoFundMe page were similarly scathing. Yet it’s telling that some of the toughest comments are from people who also donated to help. And not every commentator was so brutal. Many responded with surprising generosity. A man named Victor Torres-Bowser writes:

Hello – I am a leftie liberal gay dad who also feels badly for your situation and wants to donate some money to you for your horrible situation. Just make sure you sign up for some sort of insurance during the next open enrollment. Hope your case is a lesson to others.

Decent healthcare is a basic human right. I hope this finds you and your family well. Good luck.

That’s precisely the spirit from which to offer help.

I spoke with Mr. Lang today. He’s a more sympathetic figure than you might think. He doesn’t place all the blame on Obamacare, either, though he still places too much.

He’s certainly not the first to aggravate his own misfortune through ignorant or foolish behaviors. He’s definitely made mistakes with his health care. Yet before one gets too indignant, it’s worth remembering that he is the main victim in the story. Some of his mistakes are quite similar to those made by many others who are trying to navigate a complicated and confusing health insurance system.

Lang is not the only conservative who needs serious help. Millions of low-income, sick, or injured Americans are uninsured or going without needed care because they disdain President Obama or because they misunderstand and distrust the Affordable Care Act.

This is a devastating, predictable consequence of the polarized politics that surround ACA. We’ve learned time and time again in public health that effective interventions must be culturally competent, and must be accepted and trusted within local communities. This is true within hard-pressed black and brown Chicago neighborhoods. It’s true within many marginalized LGBT communities where one seeks to prevent HIV infection. This is true within many hard-pressed precincts of Red-State America, as well.

Near-universal coverage requires that we reach out to all of these communities, including those most distrustful of health reform and the president.

We know it can be done. In 2012, President Obama got absolutely clobbered in Kentucky, West Virginia, and Arkansas. Yet all three states have seen dramatic reductions in the number of uninsured because of health reform. I wish more residents of these states would acknowledge this reality. That’s life in 2015 America.

I’ve often praised the Obama administration for its efforts to accommodate Republican governors when negotiation is possible to expand Medicaid or otherwise implement health reform. These state-federal negotiations provide a bipartisan bright spot in the long political slog of health reform. I don’t particularly like or trust these governors. That’s almost beside the point. For health reform to succeed, it must become something like Medicare – enacted by Democrats, but now fully owned and embraced by politicians of both parties.

Until that happens, we’ll keep losing people like Luis Lang, who aren’t hearing important information about how to protect their health. These are good people we really need to reach.