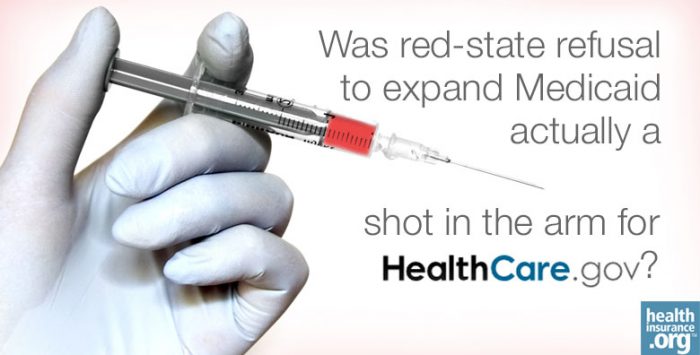 Red-state governors and legislatures that refused the Affordable Care Act’s Medicaid expansion were probably aiming to help the ACA die the death they thought it deserved. Oddly enough, those refusals have propped up enrollment in private health plans on HealthCare.gov, the federal exchange.

About 11.7 million people are currently enrolled in private health plans sold on the ACA exchanges. Of those, 8.8 million bought their plans on HealthCare.gov, the federal exchange serving 37 states, including almost every state under mainly Republican control. Almost two million of those QHP buyers – approximately 1.9 million, or 22 percent – would have been eligible for Medicaid if their states had not refused to expand Medicaid eligibility in accordance with the terms offered by the ACA. (The Department of Health and Human Services (HHS) somewhat indirectly revealed this fact in an ACA enrollment report released earlier this month. See the note at bottom for an explanation as to how the 1.9 million figure was derived.)

In states that accepted the Medicaid expansion, adults under 65 who earn less than 138 percent of the federal poverty level (FPL) are eligible for Medicaid, while eligibility for subsidized private plans (so-called qualified health plans, or QHPs) on the exchanges begins at 138 percent. In states that refused the expansion, the eligibility threshold for subsidized private plans dropped to 100 percent FPL. (Those with incomes below that level are left out in the cold).

In non-expansion states, then, there was a large pool of potential QHP buyers who were offered coverage on the most advantageous terms. For buyers under 138 percent FPL, premiums for the “benchmark” Silver plan are capped at 2 percent of income – and those plans cover 94 percent of the average user’s yearly costs, the best on the exchange and indeed about the best on offer in any private insurance sold in the U.S. Low-income buyers in non-expansion states accepted this offer in droves.

Saved from a death spiral?

If you strip out those 1.9 million QHP buyers, the exchanges look a lot less successful. This week, Avalere Health published a startling analysis showing that QHP takeup rates among the lowest-income uninsured who qualify for subsidies are much higher than the rates at higher income levels.

Avalere calculated that fully 76 percent of eligible uninsured residents of HealthCare.gov states with incomes in the 100-150 percent FPL band have enrolled in subsidized QHPs. As we’ve just learned, a huge percentage of them (about 57 percent, 1.9 million out of 3.32 million) would have qualified for Medicaid if all states had embraced the expansion.

At higher income levels, QHP takeup among the qualified uninsured drops like a rock – to 41 percent in the 151-200 percent FPL income range, and all the way down to 16 percent at 300-400 percent FPL, the highest income level at which subsidies are potentially available.

In some red states that refused the Medicaid expansion, which are poorer on average than expanding states, the QHP markets might be in real trouble were the ranks not swelled by buyers who should be in Medicaid.

The extra pool of buyers created by the Medicaid freeze-out may even have punched above its weight. Larry Levitt, senior vice president at the Kaiser Family Foundation, notes, “the fact that states not expanding Medicaid had a bigger pool of low-income subsidy eligibles to draw upon has probably helped them enroll a bigger share of those eligibles in the marketplace. It made them look more successful in terms of overall enrollment” – and success breeds success.

On the edge of the Medicaid gap, a relatively sweet private plan deal

Why did so many more buyers at the lowest-income eligibility level avail themselves of subsidized QHPs?

Buyers in the 100-138 percent FPL band are likely not only to be most desperate for coverage but to find coverage most affordable and most adequate.

ACA subsidies are calculated so that the buyer will pay a fixed percentage of income for the “benchmark” second-cheapest Silver-level plan in her area. For those with incomes under 138 percent FPL, subsidized premiums are capped at 2 percent of income. For those in the 138-150 percent income band, they range from 3-4 percent. At 150-200 percent FPL, they’re between 4 percent and 6.3 percent, and so on up to 9.5 percent in the 300-400 percent FPL band.

Silver-plan premiums are very low for buyers who would qualify for Medicaid if their states had accepted the expansion. For buyers in the 138-150 percent range they are more substantial, and for buyers from 150-200 percent FPL and up, they can be a real hardship.

While Bronze plans for the slightly-more-affluent can be much cheaper, or even free, you have to buy Silver to access Cost Sharing Reduction subsidies that reduce deductibles and out-of-pocket costs to levels appropriate for these income ranges. That is, you have to buy Silver if you want affordable healthcare as opposed to just affordable insurance. Deductibles on Bronze plans generally range from $5,000 to $6,600, which might as well be $6.6 million as far as a lot of lower-income buyers are concerned.

Cost Sharing Reduction is strongest for buyers in the 100-150 percent FPL range. As you move up the income ladder, it weakens in value, which means that listed deductibles and co-payments rise along with premiums. Prices and deductibles alike can look daunting to buyers with relatively modest incomes, especially over 200 percent FPL.

The ACA private plan market is growing at close to the rate projected by the Congressional Budget Office prior to launch. It would probably be lagging further behind CBO projections if not for the boost provided by red-state governors bent on denying health insurance to their poorest constituents (though if more states had expanded Medicaid, the CBO would probably have reduced its private-market projections, taking the smaller pool into account). That’s a bitter irony that should be gratifying neither to those who are working to make the ACA a success nor to those bent on its failure.

Here is the calculation behind the claim that 1.9 million enrollees in non-expansion states have incomes in the 100-138 percent FPL range. According to HHS, in states that refused the Medicaid expansion, a whopping 47 percent, or 2.8 million, had incomes between 100 percent and 150 percent of the Federal Poverty Level (FPL). Among those 2.8 million, those with incomes between 100 percent and 138 percent FPL would have been eligible for Medicaid (and so would not have been granted subsidies for private coverage) if their states had accepted the ACA expansion.

Unfortunately, HHS did not provide a figure for buyers in the narrower 100-138 percent (shoulda been in Medicaid) range. But by comparison with the enrollment figures in states that expanded Medicaid – in which just 22 percent of enrollees were in the 100-150 percent FPL band, we can infer how many were in that range in non-expansion states.

If you add enough enrollees in the 100-150 percent band to the expansion state total to match the 47 percent in the non-expansion state total, you get percentages in each income band that are within a point of each other. (Here’s the comparison in detail.)