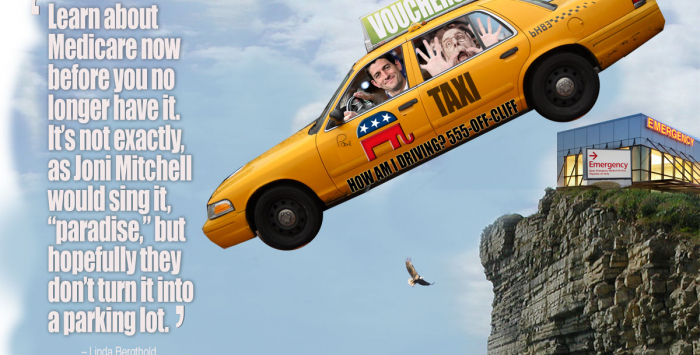 In the next weeks and months, you will hear a lot about Mitt Romney’s choice for Vice President, Congressman Paul Ryan. The Congressman is known for his signature idea – the restructuring of Medicare and Social Security.

As my colleague, Harold Pollack has so eloquently posted on this site in A clarifying choice, there is a very clear difference between what Ryan and his original co-author Ron Wyden (D-Ore) would do to Medicare and what the Democrats would do. (Wyden has backed off of his support for this plan recently by saying it would not preserve the public part of the program or protect the most vulnerable seniors.)

The difference between the two parties is best summarized by Ezra Klein of the Washington Post:

It’s not particularly helpful to either demonize or lionize Paul Ryan. Medicare needs to change and he has certainly made it a major point of debate. But it’s important for people of all ages to understand just what they have with Medicare now, and what it would mean in a very practical way for them if it were to change significantly.

Let’s start with those of you over 65 who already have Medicare. Ryan promises in his Path to Prosperity blueprint and successive iterations, that nothing will change for current beneficiaries or people over 55 who would be “grandfathered” into the existing Medicare program. All who have Medicare now can keep it, even after Ryan puts traditional Medicare in competition with private plans and caps the government provided premium.

In the current Medicare program, you have several choices – you can choose traditional Medicare which leaves about 20 percent of your costs uncovered; buy a supplemental or “gap” plan to fill in those uncovered costs; or sign up for a Medicare Advantage managed care plan. Ryan is not clear about what would happen to the choices of current beneficiaries in ten years when his reforms are implemented.

He proposes to cut 20 percent from the Medicare program, so where would those “savings” come from? Would traditional Medicare survive if sicker members flock to it out of confusion with the new marketplace or mistreatment by private insurers?

And what about the increasing share of cost that would be borne by beneficiaries under the Ryan plan?

What if you are under 55 now and worry that Social Security and Medicare may not be there for you when you retire? You already know that the eligibility age for Social Security benefits has been raised.

Now Ryan proposes to raise the age of eligibility for Medicare as well. What you would get is a “defined contribution” from the government to purchase a plan from among several competing plans in your area. The difference between what you would have now and what you would get when you become eligible, though, is that your premium would be pegged to the second lowest cost plan.

If you wanted a more expensive plan, you would pay more out of your pocket. The amount you would pay would be significantly higher than beneficiaries pay now, according to the CBO estimates.

Ryan argues that you would have more choice at the same time as the “caps” would save money for the program. But wait. You would have choice now. The private sector competes in Medicare now. The richer you are the more you pay now. The big difference is that your participation in Medicare now is guaranteed no matter how much you cost or how sick you are. The biggest risk in the Ryan plan is that the government “premium support” does not keep up with inflation and you end up paying more and more each year for the same plan.

I believe that there is much that can be improved in the current Medicare program without destroying its basic social insurance framework. There are ways to manage the care of people with chronic illness more effectively; there are a number of ways to pay providers differently so that they are not incented to provide more care instead of better care; there are ways to save money through tougher action on fraud and abuse; and there are options to increase the eligibility age or have higher income seniors pay even more than they do now that could save money for Medicare without changing its basic structure.

What is Medicare anyway? (This Wikipedia page tells you much more than you would ever need to know.) Should it remain a social insurance program that uses a payroll tax to fund a “defined benefit” set of services or should it use those funds to completely subsidize the private sector via a defined contribution?

Learn about Medicare now before you no longer have it. It’s not exactly, as Joni Mitchell would sing it, “paradise,” but hopefully they don’t turn it into a parking lot.