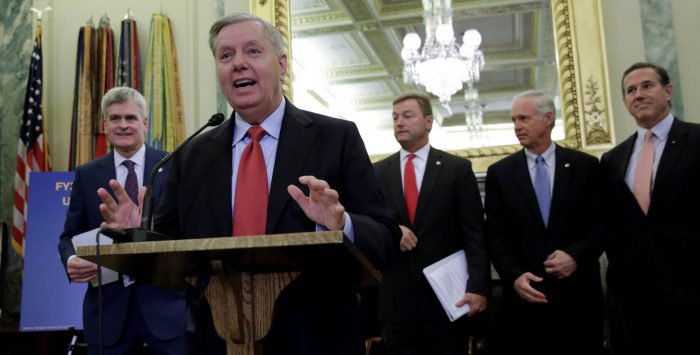 When Senators McCain, Collins, and Murkowski cast their fateful votes, pretty much everyone assumed that ACA repeal had reached its politically ignominious end. The klieg lights, cable TV, and the front page shifted to hurricanes Harvey and Irma. President Trump announced he would let DACA expire. Democratic leaders Chuck Schumer and Nancy Pelosi negotiated what appeared to be a tactically brilliant three-month extension of the debt ceiling. Senator Sanders released his single payer plan. The Senate HELP committee began the process of discussing a much less ambitious, bipartisan bill. The world kind of moved on.

Only a cloud no bigger than a man’s hand was still up there, called the Cassidy-Graham bill. At first, it seemed like a bit of a joke. Arcane Senate rules impose a final deadline of September 30 to pass an ACA repeal based on a simple Republican majority vote. For weeks, no one in Washington took Cassidy-Graham very seriously.

By Thursday or Friday, liberal heavy-hitters were becoming a little concerned, then very concerned, then actually alarmed, as they saw Senator McCain and Republicans leaders warm up to this bill.

?Red Alert?#Trumpcare is back & Senate GOP has until Sept 30 to pass their bill. We need your voices more than ever!

Friend of HIO Charles Gaba, then Senator Schumer and others, issued “red alerts” that this thing might be real. Liberal activists were caught napping after the House’s initial failure to enact an ACA repeal bill. They are petrified of being caught napping once again. And with good reason.

RED ALERT: Dammit, GRAHAM-CASSIDY IS ON THE MOVE! https://t.co/2ikmu1KIkB

Republicans must rustle up 50 Senate votes, obtain some sort of Congressional Budget Office score, and surmount other procedural obstacles within the before September 30. That would be hard, but Republicans might nonetheless pull this off.

Schumer and Pelosi’s deal suddenly didn’t seem so brilliant. It cleared a Senate calendar that would have otherwise been clogged by the debt ceiling and hurricane relief. Republicans freed more clock time by putting-off the required reauthorization of the Children’s Health Insurance Program (CHIP), set to expire September 30.

Most ominously, Senators Collins and Murkowski haven’t said anything about this bill. Healthcare activists are nervously remembering that these two Republican Senators are not liberal stalwarts. Given the right opportunities, each has some good reasons to change her mind.

This is in no way a moderate bill

If you don’t follow health care closely, you might be forgiven if you somehow assumed Cassidy-Graham is some more moderate compromise, designed to obtain broader support. Because it passes so many critical decisions down to the states and backloads its most significant provisions, it’s hard to precisely determine its true impact. Partly for this reason, the pending assessment by the nonpartisan Congressional Budget Office might create better optics, too.

Senators Bill Cassidy and Lindsey Graham have often sounded moderate notes in the repeal-and-replace debate. Two months ago, Senator Cassidy wrote in the Washington Post: “Let a blue state do a blue thing and a red state such as mine take a different, conservative approach.” Senator Graham, for his part, harshly criticized the partisan process that produced the Senate’s failed repeal bill. A mild-mannered physician, Cassidy has spoken warmly of the “Jimmy Kimmel test” to evaluate any ACA repeal effort.

Despite all that, this is no moderate bill. Cassidy-Graham would also be enacted by precisely the partisan process Senator Graham had previously criticized.

Unveiling the bill, Graham commented: “If you want a single payer health care system, this is your worst nightmare.” If anything, he was unduly modest. Whether you believe in single-payer or not, his bill would be the biggest retrenchment of American health policy since the enactment of Medicare. (I happen to believe Republicans’ ACA repeal would hasten the arrival of single-payer by destroying plausible market-based alternatives. But that’s another story.)

Cassidy-Graham dropped the tax cuts for the affluent that proved so politically immolating to prior Republican repeal bills. The bill would still would convert the entire Medicaid program from its current state-federal partnership to a per-capita block-grant designed to encourage further cuts. It would, according to the Center on Budget and Policy Priorities, “destabilize the insurance marketplace” by cutting the Affordable Care Act’s subsidies for low-income people and eliminate the ACA’s individual mandate. It would also allow state waivers to permit insurers to charge higher premiums on the basis of preexisting conditions and other factors.

The stew is the same … and it’s toxic.

The indispensible Timothy Jost presents more nuts-and-bolts details here. Cassidy-Graham retains much of the junk DNA of previous repeal bills. It includes a one-year ban on federal funding for all Medicaid-covered services furnished by Planned Parenthood. (It’s possible that this provision is ornamental, placed into the bill to be dropped in return for Senator Collins’ vote. That doesn’t make Democrats feel any better.)

Other boring but important verbiage matters, too. For example, the bill would end federal funding of retroactive Medicaid eligibility. Since 1965, health care providers could treat car accident victims and others costly illnesses and injuries who were eligible but not enrolled in Medicaid when they required costly care. Cassidy-Graham would leave states on the hook for this.

As Sarah Kliff explains at Vox, and Jonathan Cohn explains at HuffPo, Cassidy-Graham would essentially replace the Affordable Care Act’s financing structure with open-ended block grants to states which could be used for high risk pools, measures to stabilize premiums, direct payments to medical providers, and more. It’s anybody’s guess how much of this money would actually help the poorest and sickest people who are now most reliant on ACA, and how much of this money would go to others or would simply be used to offset other spending that states would do anyway. Oh, and the Center on Budget and Policy Priorities estimates that the bill would cut federal healthcare programs by something like $400 billion over the next decade before deeper cuts kick in.

The real mystery behind Cassidy-Graham is why it is being proposed at all, and why it actually has a decent chance of passage. I think three reasons bear further attention.

A man in my position can’t afford to look ridiculous

The most basic reason is the easiest to overlook. Republicans control the Presidency and the Congress. Their failure to repeal President Obama’s hallmark policy is a massive humiliation. In different ways, this is a particular humiliation for President Trump, for House Speaker Paul Ryan, and for Senate Majority Leader Mitch McConnell. Particularly when Republicans are only one or two votes away, this provides massive motivation for another try.

American politics is so polarized that majority sentiment doesn’t particularly matter. Senators and Representatives know perfectly well that most Americans don’t want them to pass Cassidy-Graham or any other ACA repeal bill. For many politicians, though, that public sentiment is surprisingly irrelevant to their strategic calculations. Many congressional Republicans don’t need Democratic or independent voters to win reelection. As long as their base voters admire President Trump and are potentially drawn to conservative primary challengers, that’s what matters.

Cassidy-Graham exploits the personalized, undemocratic structure of the United States Senate. Republicans need 50 Senate votes to pass ACA repeal, with Vice President Pence available to break the tie. They have always had 47 or 48 of these votes available. The battle is over those final few.

Human relationships matter in this story. President Trump pushed hard for repeal. His and his allies’ efforts fell one vote short this summer, when their hopes came down to Senator John McCain. We’ll never know how much Senator McCain’s vote reflected his desire to honor Senate norms or his personal disdain for a President who weirdly disparaged McCain’s own Vietnam war heroism and weirdly profited from Russian interference in the 2016 election. Voting on this new bill, Senator McCain won’t be bailing out a President he despises. He would be supporting Lindsey Graham, one of his very closest friends and Senate colleagues.

Another factor matters, too. Republican governors – not least in Senator McCain’s own state of Arizona – had much to lose from the House and Senate repeal bills. Ohio’s John Kasich, Nevada’s Brian Sandoval, and other Republican governors played key public and private roles in turning back the repeal effort.

I’m glad governors matter to health policy. They actually have to run things. That often breeds responsibility, expertise, and accountability. Imagine a Medicare-for-All system with President Donald Trump and HHS Secretary Tom Price at the help. Liberals might ponder this thought as we consider states’ role in a single-payer healthcare plan.

Jacob Leibenluft and his Center on Budget colleagues ran these numbers, examining Cassidy-Graham’s impact on individual states in 2026. Overall spending on federal health programs would be roughly $80 billion below current baseline. Yet the impacts would be quite different across the country. California and New York, between them, would lose more than $46 billion. Red states that didn’t expand Medicaid would actually receive more money. And this understates things. The Center on Budget’s calculations do not include state-specific sweeteners one could easily provide Alaska and other small states, where moderate Senators such as Lisa Murkowski, hold this bill in the balance.

As one commentator put things, Cassidy and Graham can follow a “25-governor strategy.” If there is pork to throw around, they can buy off the smaller states, using funds extracted from the big, safely-blue states whose Senate votes are out of reach. Those punishing cuts to California and New York free billions of dollars in pork for every small-state Senate vote.

Former CMS administrator Andy Slavitt is perhaps the leading public defender of ACA. Responding to me over email, he doesn’t mince words:

You would have to be crazy not to worry about an effort to repeal the ACA, now backed by leadership. Remember, at least 45 Senators would vote for a piece of paper with the words “Repeal Obamacare” on it. The strategy to get the other 5 on board is to transfer money into their states to attract their Governor and Senator. Senators McCain, Capito, Gardner and Portman will be critical. As will Alexander and the success of his bipartisan effort. If that goes down, more momentum could swing towards Graham-Cassidy. It’s not time to watch from the sidelines if you feel you have a stake in the outcome.

ACA will never be fully safe until Democrats win back the Presidency, the Senate, or the House. Maybe that’s how it should be. Elections matter.

With 13 days to go, I’d say Cassidy-Graham faces an uphill battle. But as we know, American politics sometimes delivers unlikely outcomes. It’s foolish to take anything for granted.

* Washington, DC (population 681,000) is such a bastion. It enjoys zero Senate votes. The combination of partisan gerrymandering and Democratic urban bunching provides Republicans with an even bigger systematic advantage in the House of Representatives.