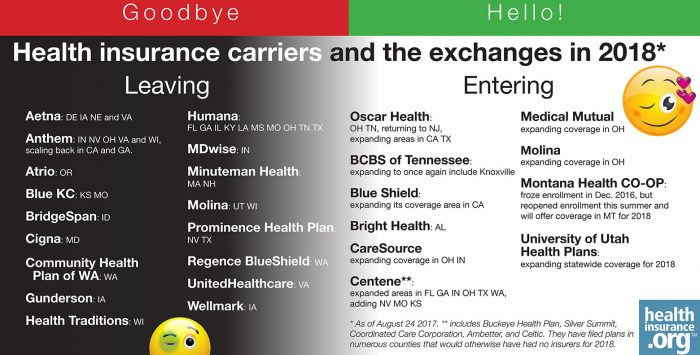 Throughout 2017, the Trump Administration and Republicans have been pushing the idea that the Affordable Care Act is “imploding” or “collapsing under its own weight.” Among the most damning evidence they’ve pointed to is “bare counties” – areas where no health carrier filed ACA-compliant marketplace health plans for 2018. But while that was a looming problem earlier in the summer, it has been resolved nationwide, for the time being.

Some carriers are leaving, but others are filling the gaps

When rates and plans were initially filed for 2018, there were 82 counties across the country (out of 3,142 total) where no insurers intended to offer coverage. But insurance regulators in the affected states have worked tirelessly to convince insurers to fill in the bare spots, and the last one — Paulding County, Ohio — was filled as of August 24. Insurers can still back out for a few more weeks, as contracts with HealthCare.gov don’t have to be signed until September 27. But for the time being, every area of the country has exchange plans filed for 2018.

To be clear, that doesn’t mean there won’t be any problems for individual health plan shoppers this fall. The uncertainty created by the Trump Administration and the GOP repeal effort has certainly pushed some insurers to exit the exchanges at the end of 2017, and more could follow them out the door in the coming weeks.

But the previously “bare” counties in Tennessee, Washington, Kansas, Missouri, Ohio, Indiana, Wisconsin, Nevada, and Virginia now have insurers slated to offer coverage. In some cases, more than one insurer stepped up to fill in bare counties.

Here’s the current status of carrier exits – and entries:

Which carriers are leaving the exchanges

Here’s a summary of which insurers are leaving, and where, as of mid-August:

Which carriers are entering the exchanges

In several states, insurers are actually entering the exchanges or expanding their coverage areas:

What does it all mean for consumers?

First of all, we’re not saying that there’s nothing to worry about. Carriers are nervous, and some are exiting the exchanges. And although virtually all counties have at least one insurer lined up to offer plans in the exchange for 2018, there will be more areas of the country with only one insurer offering coverage.

According to CMS, nearly 28 percent of exchange enrollees will have access to just one insurer in the exchange for 2018. (It’s worth noting, however, that the map CMS has been updating all summer does not account for all of the filings that insurers have submitted. As an example, the map still shows all of Alabama with just one insurer for 2018, despite the fact that the Birmingham area will have two.)

But regardless of how many insurers will offer coverage in your area, it’s certainly nerve wracking if you currently have coverage with one of the exiting insurers, and are facing an involuntary plan change for 2018.

So what does all of this mean for consumers, as we head into the fifth open enrollment period?

What happens if your carrier exits?

Insurers that are exiting the exchange generally have to provide enrollees with at least 90 to 180 days notice, depending on whether the exit is from just the exchange, or the entire individual market (on and off-exchange).

The exchange also sends out communications to enrollees each fall regarding coverage for the upcoming year. So if your insurer is leaving the exchange, you will be notified by the exchange and by your insurer, well in advance of open enrollment. If the exchange is planning to map you to a new plan, they will communicate that to you as well.

Mapping people to new coverage when their previous insurer exits the exchange is a procedure that HealthCare.gov implemented for 2017 (and some state-run exchanges have adopted similar protocol), in an effort to ensure that people don’t find themselves uninsured on January 1. In previous years, that was the result if an insurer left the exchange and the enrollee didn’t return to the exchange during open enrollment to actively pick a new plan.

HealthCare.gov’s mapping protocol means that most enrollees will still have coverage on January 1. But open enrollment is your opportunity to pick your own plan instead of just accepting the replacement plan that’s selected for you by the exchange. However, consumers need to be aware that open enrollment will end much earlier this year than it has in the past. In nearly every state, it will run from November 1, 2017 to December 15, 2017, although there are some state-run exchanges that have announced extensions.

Is your county OK with just one carrier?

Even if there’s just one insurer left in your area (which will likely be the case in South Carolina, Wyoming, Oklahoma, Alaska, Delaware, Mississippi, and Nebraska, along with rural areas in quite a few other states), premium subsidies will keep coverage affordable for most enrollees, and the ACA’s medical loss ratio rules will prevent price gouging.

The ACA also requires insurers to have adequate provider networks, although HHS is now leaving oversight of network adequacy to the states. (Most states already conducted their own network adequacy reviews, but HHS managed that process for 21 states, and is now deferring to the states instead.)

So in the rural areas of the country where there will be just one insurer offering exchange plans, it’s important to understand that the ACA has built-in safeguards to protect consumers. Insurers in those areas cannot simply raise prices due to the lack of competition, nor can they offer coverage with overly skimpy provider networks.

What if your county is ‘bare’?

To be clear, there is currently no official contingency plan for this scenario. And although there are no ‘bare’ counties as of late August, that could change in the weeks before insurers have to sign exchange contracts, particularly if the Trump Administration continues their current approach to CSR funding and enforcement of the individual mandate.

If additional insurer exits do result in bare counties after the contracts are signed in late September, it would be an unprecedented situation that would call for unprecedented solutions.

Some of the possible solutions that have been considered around the country include a public option, legislation that would allow people to use premium subsidies to buy off-exchange plans, and legislation that would allow people in bare counties to buy plans through the DC small group exchange (which is what members of Congress and their staffers use).

Although there are currently no areas of the country without plans filed for 2018, there is also no solution in place yet to address that situation if it does arise. But insurance regulators and insurers have thus far done an admirable job of solving the problem in the 82 counties that were facing the prospect of having no exchange plans available in 2018.