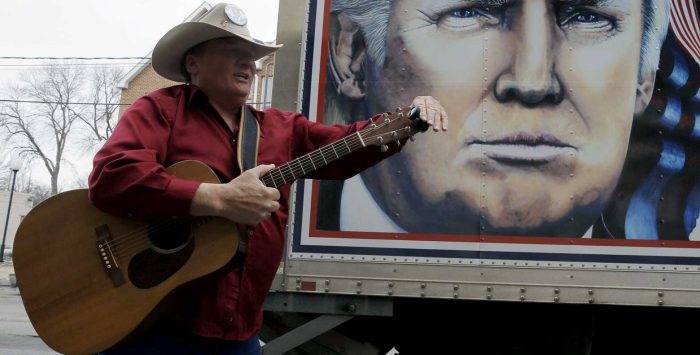 This is the season of the public option. Progressive politicians from Senator Bernie Sanders to Hillary Clinton tout various versions of it. Policy wonks such as Michael Sparer, Paul Star and passed a bill which would have allowed people to buy into Medicaid. Governor Brian Sandoval eventually vetoed the bill. That this Republican governor hesitated to do so attests to the growing popularity of public insurance alternatives to private coverage.

I’m heartened to see the public option get such attention. It’s described across the board – hopefully by many Democrats, fearfully by many Republicans – as the next logical step in the steady expansion of public coverage. It’s likely to be the political glue holding together the progressive coalition. Liberal ACA stalwarts and left single-payer advocates agree that Americans should be able to buy into Medicare or Medicaid if that’s what they want to do, and that enacting a public option is less disruptive and risky than attempting the immediate leap to a single-payer plan.

There’s an irony here. I’ll keep it a secret for readers who didn’t notice the title.

The public option is popular, in part, because the human experience of the ACA marketplaces is disappointing in many parts of America. 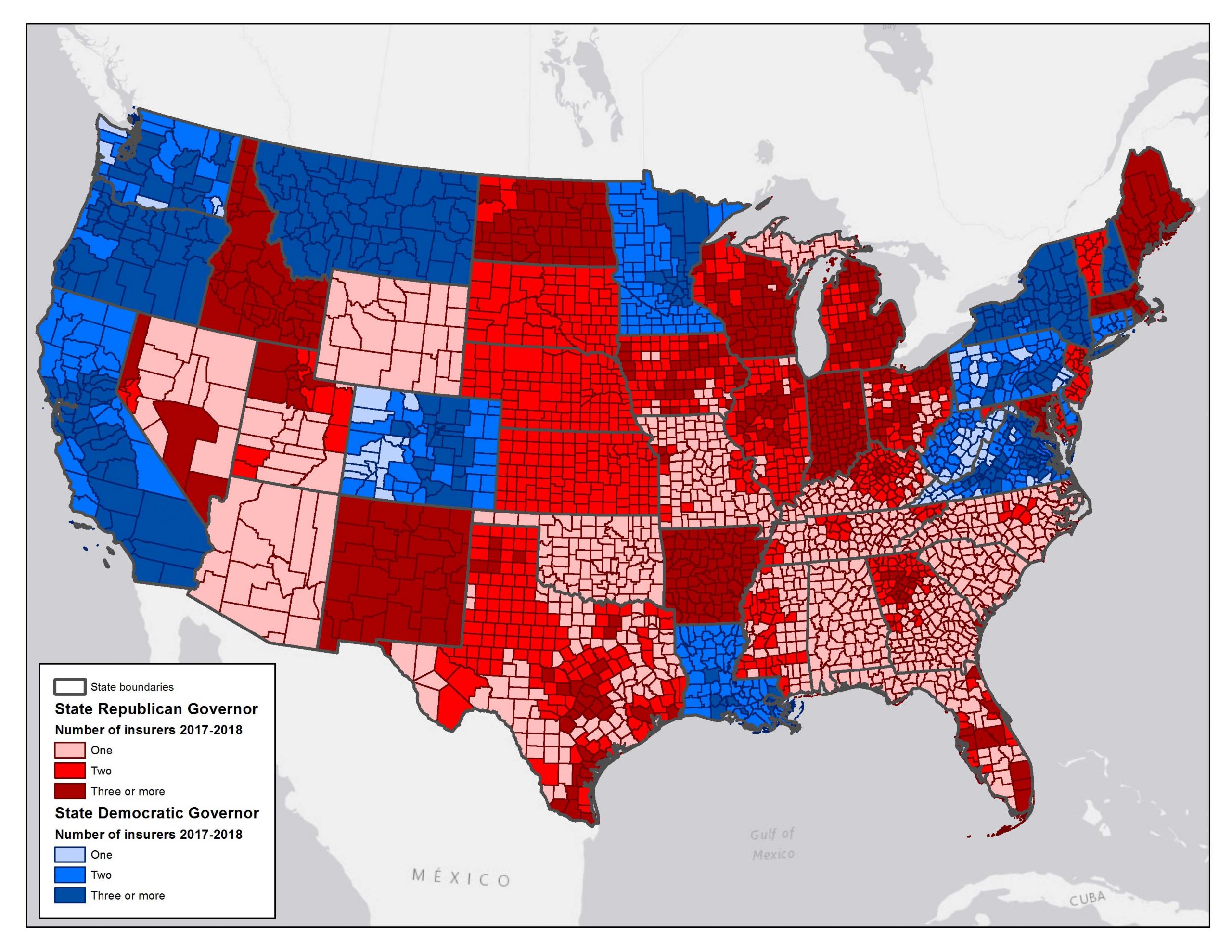 This color-coded map of the continental United States tells the basic story. It shows which party controlled the governorship November 7, 2016, and how many ACA marketplace plans were available in each county. (North Carolina flipped to Democratic control after that.) it shows the number of competing ACA marketplace plans available in each county. The counties in greatest difficulty have only one available plan.

Second, Republicans are equally terrible at operating successful ACA exchanges. Only one big blue metropolitan area-Philadelphia, PA, was down to one plan. Basically, every other major struggling area is in a red state. Huge sections of southeastern states, Arizona, Oklahoma, and the mountain states are down to one marketplace plan.

This pattern reflects policies in many Republican states that weaken or undermine the marketplace insurance pool. Such policies include rejecting the ACA Medicaid expansion, which places the poorest and most complex consumers into the marketplace insurance pool, “grandfathering” non-ACA-compliant plans to snatch the youngest and healthiest consumers, bad-mouthing and failing to actively administer the law.

This last point illustrates how the standard U.S. map distorts our understanding. If cattle and corn fields bought health insurance, we’d have a reasonable fear that ACA is collapsing. But that’s not the reality If we consider the experience of real human beings, the clusters of people in New York City, Los Angeles, Chicago, and Houston are vastly more important than Idaho, Montana, the Dakotas, or Wyoming. Yet these sparsely-populated states occupy vastly more physical space.

The below map may resemble what my editor Steve Anderson saw on his last bad acid trip. It’s actually the same map. Only here, counties are weighted by their populations. The big sparsely-populated Western areas with only one plan virtually disappear. 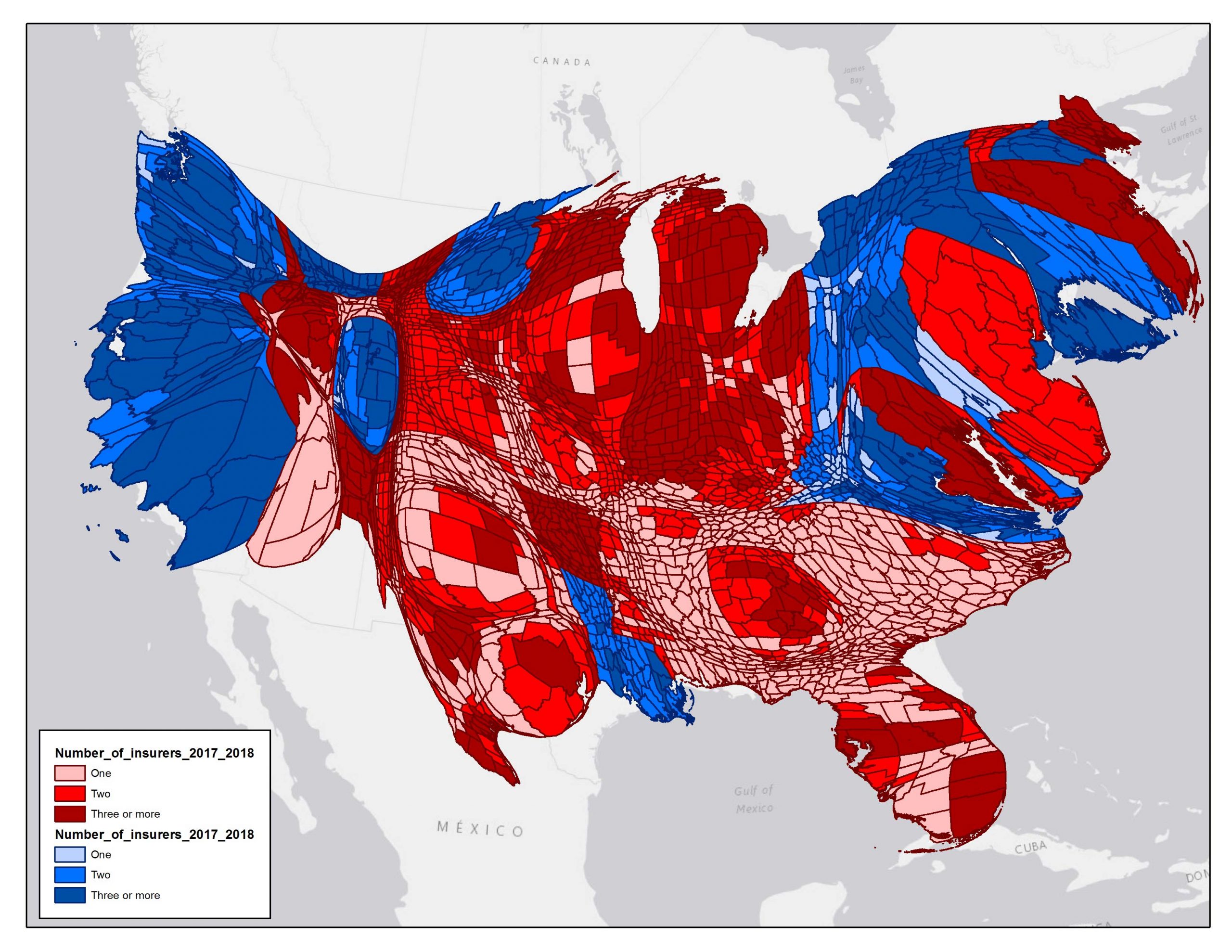 At one level, this different look suggests that ACA marketplaces are doing pretty well. 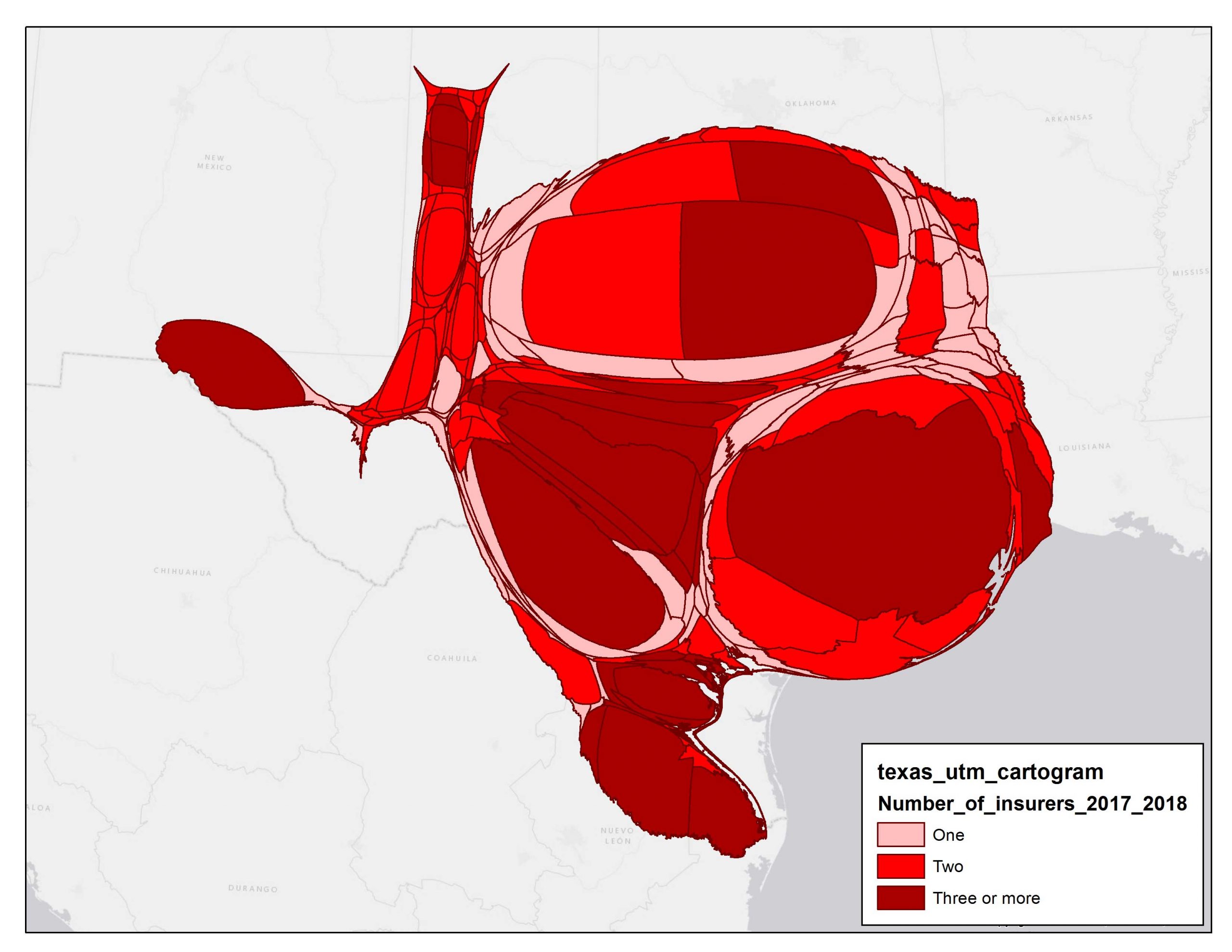 Texas – not a diseased heart. (Click for better view.) 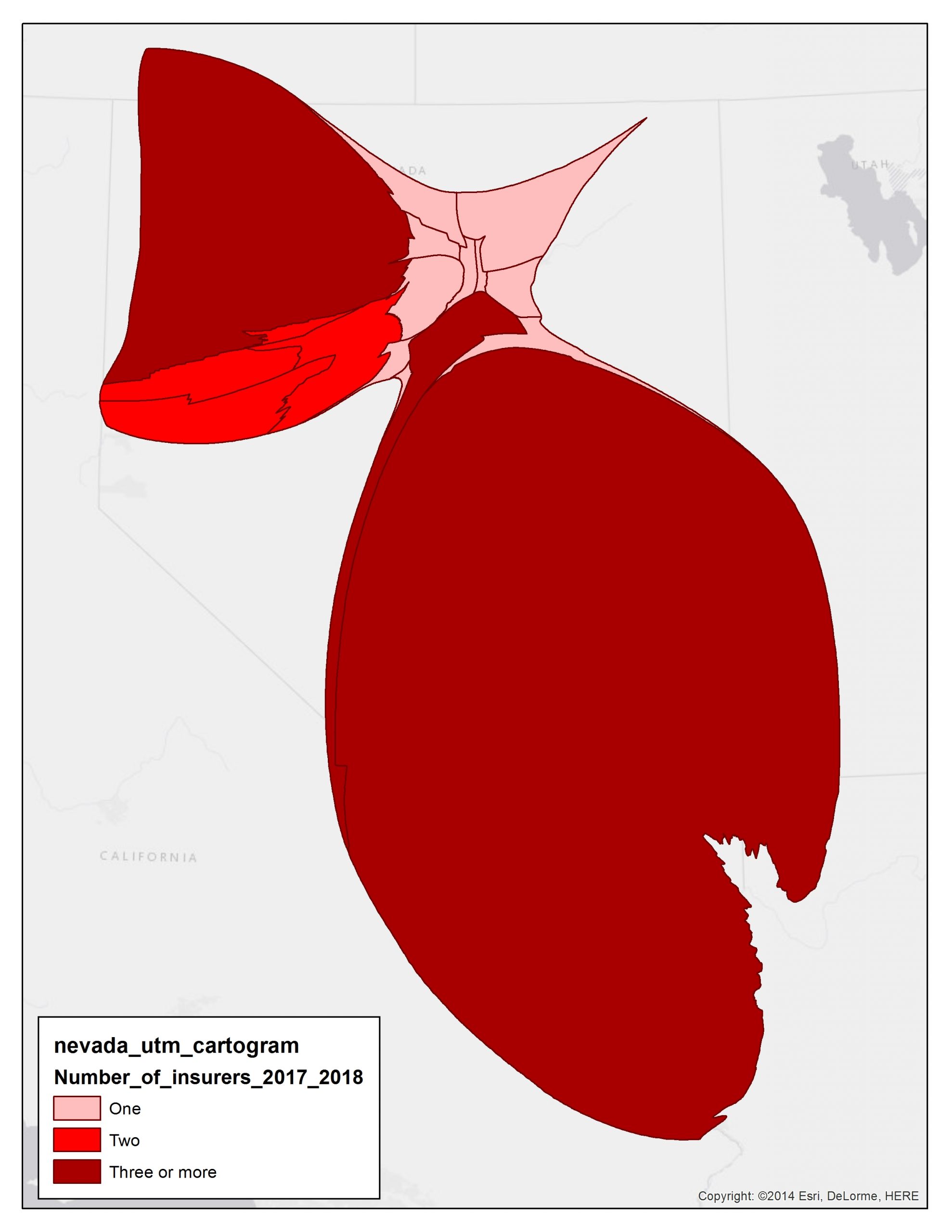 Outside the south, the great majority of Americans live in the shaded areas that have at least two competing insurance plans. The cool maps of Texas and Nevada (at the right) indicate this pattern more clearly.

But at another level, this pattern underscores the poor performance of ACA marketplaces in rural areas. ACA marketplaces work well in densely-populated liberal areas. The marketplaces require more care and feeding to really succeed in Wyoming, Iowa, or Oklahoma. Competition among insurers and providers is pretty thin in these locales.

These areas need substantial public subsidies – as were provided in Alaska – to moderate prices and stabilize the risk pool for marketplaces to really work. It’s hard to imagine Republicans providing the same care and feeding to marketplaces that serve millions more people. It’s equally hard to imagine Republicans in deep-red states such as Alabama or South Carolina genuinely supporting ACA exchanges, when most local politicians view Barack Obama as the only pertinent political home address.

Is a public option hard to imagine? Look at Medicare.

ACA marketplaces may never work well in rural areas. Indeed some of the very same counties lack Medicare Advantage plans, and for some of the same reasons. These areas have too few people for real competition among insurers or among providers. These gaps are not a huge problem in Medicare. Why is that? Because Medicare has a powerful alternative to Medicare Advantage. It’s called traditional Medicare, but it might as well be labeled the public option. Its pricing power keeps prices reasonable. Seniors are essentially insulated from the pricing challenges of rural care.

So here’s the irony: Trump Country really needs a way to bypass the ACA marketplaces entirely. So Democrats’ favorite policy option – the public option – would be most valuable in precisely the deep-red areas that went most fervently for Republicans and for the President.

What about the politics? I suspect they may prove surprisingly favorable. If you ask the typical Trump voter: Should a 57-year-old be allowed to buy into Medicare if she wants to? Quite a few say “Why, yes.” In one recent poll, 53 percent of Trump voters somewhat or strongly favored allowing people to buy government health insurance.

Republicans seem hellbent on sabotaging the ACA marketplaces over the course of the Trump presidency, for as long as Republicans hold a congressional majority. They might ask themselves where this policy is going.

Democrats would face a real knife fight to enact the public option in 2020 or whenever they win both the presidency and an operational congressional majority. Once enacted, I don’t think the public option would ever be repealed. Most Americans, whatever their political perspective, value this choice.

I’ll make a second counter-intuitive prediction, too. The public option will prove most popular in deepest Trump Country, where regular folk need it the most.

EDITOR’S NOTE: Thanks to the University of Chicago’s Todd Schuble for assistance with the cartograms.