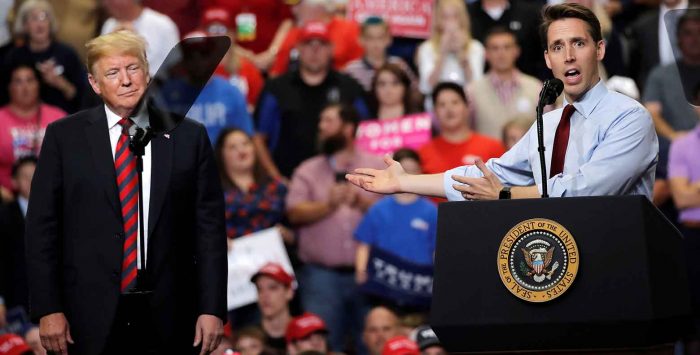 Missouri Attorney General Josh Hawley, running for Claire McCaskill’s Senate seat, is out with an ad in which he pledges to maintain guaranteed access to health insurance for people with pre-existing conditions – a policy goal supported by 90 percent of the public, according to a recent Kaiser Family Foundation poll.

Hawley’s promise is not a literal lie, however. In the ad, he states that he supports “forcing insurance companies to cover all pre-existing conditions” (note the verb – bashing insurers is now a bipartisan sport). He does not say that those with pre-existing conditions can’t be charged more. And that’s precisely what the Pre-existing Conditions Protection Act, a House bill introduced last year by Greg Walden (R-Oregon) that embattled Republicans are currently scrambling to support, would do, as McClatchy’s Lindsay Wyse and Brian Lowry report:

A similar bill introduced in the Senate a few weeks ago by Dean Heller, R-Colorado, has a companion flaw: it fails to forbid insurers from excluding coverage for an applicant’s own pre-existing condition from a policy offered to that individual.

Let’s assume, though, for the sake of argument, that a Republican House and Senate, with Hawley a member of the latter, do repeal the ACA and offer a replacement. Let’s assume, too, that the replacement fully maintains the ACA protections for people with pre-existing conditions in the individual market. That is, the new law maintains the ACA’s essential health benefits that every plan must cover; forbids denying coverage or charging people more based on their medical history; and allows pricing to vary only by age and geographical area. What would such a Republican replacement look like?

Here’s a wild inference. The replacement bill would advance various other Republican priorities by

Sound familiar? That’s the American Health Care Act, introduced in the House by Paul Ryan in March 2017. The Congressional Budget Office estimated that the bill would increase the ranks of the uninsured by 24 million over ten years. Medicaid enrollment would be 14 million lower than under current law. A shrunken individual market offering high deductible coverage would be more attractive to younger and more affluent enrollees and unaffordable to older and lower income people.

That original bill did maintain the ACA’s protections for people with pre-existing conditions. It never came to a vote because House leadership knew it was a few votes short of passage, rejected by a handful of relative Republican moderates on one side and by hard-right Freedom Caucus members on the other, who thought its subsidies were too generous and its coverage rules too like the ACA’s. Only when Tom MacArthur, R-NJ offered an amendment that enabled states to adulterate the ACA’s pre-ex protections did the Freedom Caucus come aboard and enable the bill to pass the House.

For a few months in 2017, it seemed that undoing pre-ex protections was the sine qua non of ACA repeal. Most Republicans now recognize that goal as political poison. If they maintain power – in part by obfuscating their record on this front – they could learn from experience and jettison this passion for medical underwriting – though it does have a way of repeatedly creeping back into their legislation.

But AHCA 1.0 serves as a reminder that Republicans could undergo conversion on the pre-ex front and still take access to health care away from tens of millions of Americans. They could permanently cripple Medicaid by capping the federal government’s contributions to states. They could also convert Medicare to a “premium support” or “voucher” system in which private Medicare Advantage plans’ pricing is no longer tethered to traditional Medicare’s. They could radically reduce government support to people who need to look to the individual market for insurance, rendering coverage unaffordable to millions.

They will attempt all of this, and achieve most of it, if they maintain control of the House and Senate.

* The individual mandate, which requires all for whom insurance is deemed affordable by ACA standards to obtain it or pay a tax penalty, has always been the ACA’s most unpopular feature. It exists because the ACA’s creators considered it a necessary condition for making insurance available on equal terms to people with pre-existing conditions. Republican zeroed out the tax penalty last December as part of their tax cut bill. Since the Supreme Court had upheld the mandate only as an exercise of Congress’s taxing power, the AG suit argues, the mandate and the entire law are unconstitutional now that there’s no penalty. The suit ignores the fact that the current Republican Congress deliberately zeroed out the penalty while not repealing the ACA, reflecting learned experience that ACA subsidies are enough to keep the ACA private plan marketplace functioning, albeit in impaired fashion, no matter what measures (other than repeal) Republicans take to sabotage it.