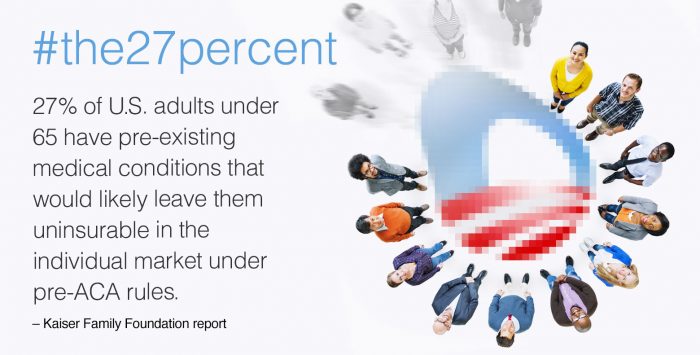 As Republicans gear up to repeal the Affordable Care Act, the Kaiser Family Foundation is out with a report finding that 27 percent of adult Americans under age 65 have pre-existing medical conditions that would likely leave them uninsurable in the individual market under pre-ACA rules. In most states, those rules allowed for medical underwriting – that is, denying coverage or charging more for it on the basis of the applicant’s medical condition and history.

While the Kaiser analysts’ primary purpose is to demonstrate that many millions would be denied any sort of coverage if the ACA’s ban on medical underwriting is repealed*, the report also highlights the extent to which the ACA’s current beneficiaries – most of whom are in the lower third of the country’s income distribution – would be left out in the cold by repeal. Not only would some be rendered ineligible for coverage, but millions would lose current coverage that’s relatively well-suited to their incomes and health status.

Here is the passage that indicates as much:

The rates of declinable pre-existing conditions vary from state to state. On the low end, in Colorado and Minnesota, at least 22% of non-elderly adults have conditions that would likely be declinable if they were to seek coverage in the individual market under pre-ACA underwriting practices. Rates are higher in other states – particularly in the South – such as Tennessee (32%), Arkansas (32%), Alabama (33%), Kentucky (33%), Mississippi (34%), and West Virginia (36%), where at least a third of the non-elderly population would have declinable conditions.

The ACA not only makes individual market health insurance available to people without regard to medical condition, it also provides relatively income-appropriate coverage to the 32 percent of the population living in households with incomes under 200% FPL – compared at least to Republican replacement alternatives, which will do most harm if they repeal or radically scale back the ACA Medicaid expansion. (See, for example, how Tom Price’s skimpy ACA replacement bill plays out for low-income people.) The populations in states with the worst health will suffer most under ACA repeal.

* Some Republican ACA replacement plans call for “continuous coverage” protection, which would shield those seeking coverage in the individual market from medical underwriting if they don’t go uninsured for more than a very brief period. Such protection is only effective if coverage is affordable to all seekers – which is unlikely in the scantily subsidized Republican plans.

** Legally present noncitizens who are time-barred from Medicaid enrollment are eligible for subsidized marketplace coverage if their income is below their state’s eligibility threshold (100% FPL in nonexpansion states and 138% FPL in expansion states).

*** A small percentage of enrollees at every income level qualify for no subsidy at all (neither premium subsidies nor CSR), mostly because they have an offer of insurance from an employer, which disqualifies a marketplace applicant from subsidies.