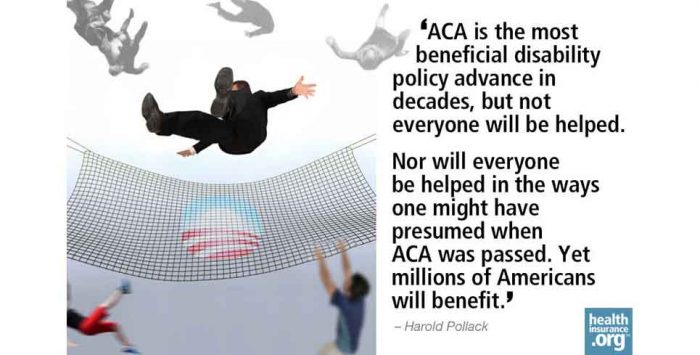 I recently delivered a summary lecture on disability policy and health reform as part of a University of Chicago series “Ethical Issues in Health Care Reform.”

No human being should be forced to watch all 84 minutes of my talk. It’s a complicated story, with an incredible range of issues in play. For starters, there’s no one population called “the disabled” with one short list of simple needs to check off in health reform. Disability is an inherently continuous and multi-dimensional concept that doesn’t comfortably match the binary administrative categories of many public assistance programs.

Because the population of Americans who live with disabilities and functional impairments is so diverse, the impact of health reform is different for different people. (If you start watching at the 30-minute point, you’ll get a sense of these differences.)

ACA is the most beneficial disability policy advance in decades, but not everyone will be helped. Nor will everyone be helped in the ways one might have presumed when ACA was passed. Yet millions of Americans will benefit. In many cases, the most helpful provisions have no ostensible connection to disability at all.

To capture the range of pertinent concerns, consider the seven people noted below. I could add many more, such as Joe Entwisle, who is a C4-5 quadriplegic, whom I profiled in the Washington Post last week.

1. A man with substance use problems who asked me for $1 outside Medici’s

Many people living with disabilities may not qualify for traditional disability programs at all. Consider one man I met outside Medici’s restaurant in Chicago. He has a substance abuse disorder. He needs help, but who will pay for it? Although he has virtually no income, he’s not a mom. He’s not a vet. Since 1996, substance abuse disorders are not qualifying conditions for federal disability programs.

Before health reform, he wasn’t eligible for Medicaid in 41 states, even if he had no income at all. Financing his substance abuse treatment and whatever else he needs for his physical or mental health needs was thus a constant challenge.

Because of health reform, he is now eligible for Medicaid in every state that has embraced ACA’s Medicaid expansion. That’s important for him. It’s also important for the safety-net providers seeking to help him.

I met the second man’s family in 2008. He was receiving excellent care for a serious liver problem. He had been accepted into the Social Security Disability Insurance (SSDI). Unfortunately he had lost a job and thus his insurance sometime before. So he was bleeding money as he was stuck in SSDI’s two-year Medicare waiting period.

Under ACA, he would have been able to buy subsidized coverage on the new marketplace. He would be protected against insurance company discrimination on the basis of his costly condition.

3. A 56-year old blue-collar worker with a heart condition who contemplates going on disability after his lumber plant closed

The third man’s plight was the sort featured on This American Life’s episode “Trends with benefits.” He’s a middle-aged guy in danger of being left behind as the bottom falls out of the blue-collar economy. He wants to work, but he has real medical problems. At his age, with his skill set, in his community, he’s unlikely to find a lucrative job that brings decent health benefits. Until now, his most viable path to health coverage was to qualify for federal disability benefits.

As of January 1, he can be assured of proper health coverage even if he is forced to take a low-wage job. That doesn’t solve his employment problem. At least he can get needed care.

Rocky Clark’s story is among the most tragic. A football star in nearby Blue Island, he was rendered quadriplegic on the gridiron. For years, his mother Annette Clark cared for him at home. As recounted by the Chicago Sun Times‘ Rick Telander:

Without the most obvious thing every football player at every level should have – lifetime health insurance for the worst of injuries – Annette had to become the round-the-clock nurse in a role that stole her life.

Rocky’s main health insurance coverage ran out nearly two years ago, and Annette was forced to cut his pills in half, sleeping no more than three hours at a time, becoming a kind of Mother Sisyphus, rolling the medical stone up the hill each day so her only son could live.

She had helpers – her two daughters, Deacon Don Grossnickle … The Rev. Anthony Williams … but it wasn’t enough.

Rocky died last Thursday night. His mother is grieving, and she’s apparently in financial trouble. She has a funeral to finance. She has a mortgage and stacks of medical bills she really can’t pay …

ACA abolished the annual and lifetime caps on coverage that so punish people suffering from catastrophic illnesses and injuries.

5. Marcella Wagner, uninsured and pregnant, rendered quadriplegic by a car accident, in a wheelchair with little use of her hands and in need of round-the-clock personal care assistance

Marcella Wagner is a young woman who was also rendered quadriplegic in an auto accident. She was uninsured at the time. Even if she had been insured, she might well have ended up on Medicaid because of her intensive long-term care needs.

She, her husband, and their child face a lifetime $3,150 asset limit, exempting their house and their vehicle. She receives good medical care, but means-testing requires her family to cash in her retirement savings and to spend down their bank account. They cannot save for their new baby’s college expenses.

The mechanics of Medicaid make it very difficult for her husband to work. ACA falls badly short for people like her.

6. A child with cerebral palsy with complex medical needs, whose parents are working and earning $65, 000 a year

As for the next category, we don’t know yet how effective ACA will be for children living with complex conditions, whose parents work but rely on help from public insurance for supports not provided through the usual employer-based coverage. State health insurance marketplaces are just starting.

No one knows quite yet whether they will work well for the variety of complicated circumstances such as these. Presumably some states will work better than others. For this one, we’ll have to grade ACA an incomplete.

7. Professor who slipped in an ice storm, now uses a wheelchair and needs a ramp to remain living at home

Finally there is that professor who slipped and fell and ended up wheelchair-bound. OK I made that one up. That’s my own private fear, and one reason I would love to buy disability insurance to stay in my home if I acquire a disability in later life.

The CLASS Act, which was actually Title VIII of ACA, was an imaginative disability insurance program precisely designed to address this problem. (I explain the basics of CLASS around here.) More properly titled the Community Living Assistance and Social Support Act, CLASS didn’t survive the partisan knife fight over health reform. It was repealed in the fiscal cliff negotiations at the end of 2012.

By then, CLASS’s death was unsurprising, given its various political, administrative, and financial challenges. That CLASS died so quietly, with so little mourning or follow-up, is more puzzling. The disability community was united behind CLASS. Nobody else seemed to care. The progressive blogosphere basically ignored it. Meanwhile, Republicans and many moderate Democrats hated CLASS. Senator Kent Conrad labeled CLASS “a Ponzi scheme of the first order, the kind of thing that Bernie Madoff would have been proud of.”

The Obama administration was waging too many fights to put chips down on something that seemed peripheral to the main arguments over expanded coverage. So when CLASS needed serious technical fixes, it was easiest just to repeal it. As my friend Don Taylor aptly noted, it’s too bad we can’t repeal disability.

Still, one must be an optimist in this business. By providing affordable expanded coverage that actually works when people become seriously ill or injured, by protecting people living with disabilities against insurer discrimination, by expanding Medicaid to millions of people who need it, ACA is a worthy milestone of American disability policy.

Senator Harkin once noted that ACA is a starter home. Much work remains. We should still be proud of what’s been accomplished, in disability as in many other areas.