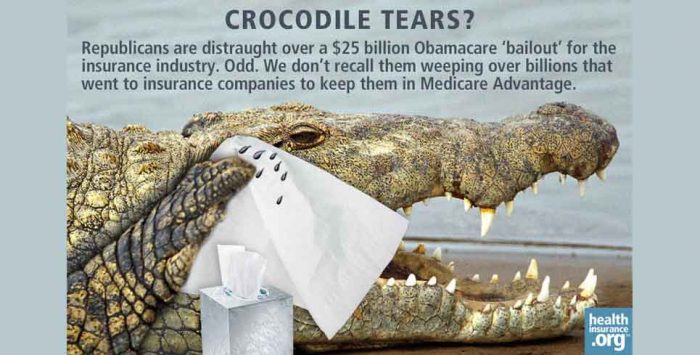 In the past, whenever anyone talked about the “three Rs,” they most likely were referring to things we were supposed to be learning in school: “readin’, ritin’, and ‘rithmatic.”

But in Washington and health insurance circles these days, when you hear talk about the “three Rs,” chances are it has nothing to do education. In 2014, the year when important parts of the Affordable Care Act are going into effect, the Rs stand for something you may never heard of before: reinsurance, risk corridors and risk adjustment.

If you’re inclined to hate Obamacare, chances are you’ve heard about them, not by name but by what some politicians are claiming they represent: a bailout of the insurance industry.

Still with me? I’ve often said that the American health care system is so complicated that trying to understand it makes your hair hurt. The new “three Rs” are just the latest example of it.

Enough to make your hair hurt

Back when I was in the insurance business, I was trying to explain the concept of reinsurance to a reporter. A couple of days later she called to tell me that her editor had banned the use of the word in news stories because it was just too complicated a concept for readers to wrap their heads around.

It really isn’t when you think of it this way: even health insurance companies get insurance to protect them against unexpectedly high medical claims from their customers.

If that editor did indeed ban the word “reinsurance,” and if you’re just now finding about the new “three Rs,” it’s probably because he and most other editors have also forbid the use of the terms “risk corridors” and “risk adjustment” from news stories.

But you need to know a little bit about them to understand the bailout talk.

When members of Congress were writing the health care reform bill, they set aside $25 billion for a program to make it more likely that insurers would participate in the health insurance exchanges, or marketplaces, that started operating a few months ago.

The exchanges are an important part of the Affordable Care Act. They enable people who can’t get affordable coverage through the workplace to shop for it in either a state or federally operated exchange. The exchange that has gotten the most attention, primarily because of technology problems that took weeks to fix, is HealthCare.gov, which serves people in 36 states. The other states and the District of Columbia are operating their own exchanges.

So lawmakers created three programs to protect insurers against what’s known in the insurance world as adverse selection.

Insurers and many health policy experts suspected that the first people to sign up for coverage through the exchanges would be those previously shut out of the insurance market – people who were older and sicker than the population at large. Those people couldn’t afford to buy coverage previously because insurers were able to charge them far more than younger, healthier people.

In many cases, insurers refused to sell coverage at any price to prospective customers with pre-existing conditions.

To assuage insurers’ concerns, Congress created a three-pronged program to insulate insurers from big losses during the first three years (2014 through 2016). As the Department of Health and Human Services notes, the overall goal of the program components is “to provide certainty and protect against adverse selection in the market while stabilizing premiums in the individual and small group markets” during the early years.

The reinsurance component provides funding to health plans that incur unexpectedly high claim costs from their enrollees. The risk corridor component protects against what undoubtedly will be inaccurate rate-setting on the part of insurers during the early months and years through a risk-sharing arrangement between insurers and the federal government. Under the risk-adjustment component, funds can be transferred from plans that wind up with lower risks to those that wind up with higher risks.

I told you this could make your hair hurt. If you want to dive deeper into the 3Rs, you might want to take a look at this overview of the program from the Centers for Medicare and Medicaid Services (CMS).

Why this ‘bailout’ is pocket change

Some critics of the Affordable Care Act would lead you to believe that this is an unprecedented bailout of the insurance industry. What they don’t tell you is that while $25 billion is a lot of money, it is pocket change compared to the enormous amount of taxpayer dollars that have been flowing to private insurance companies for nearly three decades to keep them in the Medicare Advantage program, which has long had the unwavering support of Republicans in Washington.

Many Republicans have long supported efforts to privatize Medicare, and the Medicare Advantage program is one of the ways they’ve tried to do it. Medicare Advantage plans are private alternatives to traditional Medicare. When Americans reach 65, they can enroll in traditional Medicare or in a private plan operated by an insurer. If they opt for a private plan, the federal government still picks up the tab and transfers money to the private insurer every month.

As the U.S. Government Accountability Office explains it, CMS adjusts the monthly payments it sends to private insurers to account for each beneficiary’s health status.

We’re talking a lot of money here. In 2012 alone, the GAO calculated that the federal government spent about $135 billion on the Medicare Advantage program. According to the GAO, the government has been more than generous over the years to private insurers, having paid them way more than it should have because of shortcomings in how the risk scores are developed.

So the next time you hear that Obamacare is a bailout for insurance companies, know that it could be argued that the Medicare Advantage program represents an ongoing bailout. Or at least an ongoing profit-protection program. The Obamacare “three R” program by contrast, involves far less money and will end on December 31, 2016.