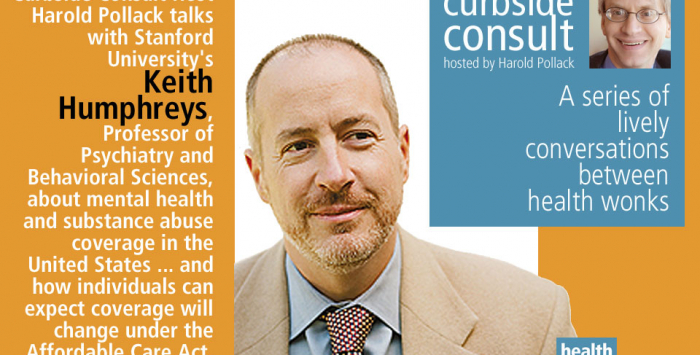 Perhaps the most under-covered aspect of health reform is its dramatic expansion of coverage for the treatment of psychiatric and substance abuse disorders. The Affordable Care Act’s Medicaid expansion will finance care for millions of low-income Americans, now uninsured, who suffer from these conditions.

I caught up with Stanford University’s Keith Humphreys to discuss these provisions. Keith is an addiction services researcher and clinician at the VA. He has treated many veterans for substance use disorders, PTSD, and other conditions.

During 2009 and 2010, Keith served as Senior Policy Advisor in the White House at the Office of National Drug Control Policy. He was an important figure in the crafting and passage of the substance abuse provisions of health reform.

We had a wide-ranging conversation about substance abuse treatment, the surprising effectiveness of Alcoholics Anonymous, the harms associated with alcohol, the 2,000 detained individuals with psychiatric disorders (typically with co-occurring substance use disorders) held in our gigantic Cook County jail at 26th and California.

Keith is an old friend. If you enjoy his work, you might read his work at samefacts.com, where my own work sometimes appears.

In Part 1, Keith and I discuss common fallacies about who receives the lion’s share of mental health and substance abuse treatment in America. They also talk about the link between substance abuse and crime. The two researchers also compare notes on Alcoholics Anonymous and its efficacy.

In Part 2, I talk with Keith about the “pre-story” of mental health reform, including Humphreys’ involvement in a 12-year fight for mental health parity.

In Part 3, we discuss the impact and importance of Obamacare on mental health and substance abuse coverage for Medicare enrollees. They also discuss briefly whether the expansion of mental health services helps decrease the incidence of violent crime.

In Part 4, we look at challenges for states in delivery of mental health services. The two also talk about whether there’s capacity within the system to deal with expanded Medicaid coverage of treatment services.

I hope you enjoy our conversation.