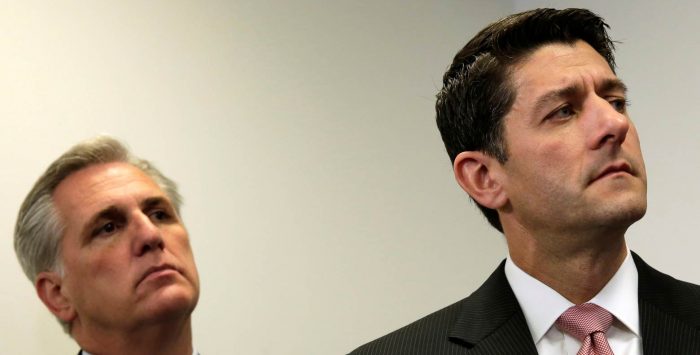 Brendan Buck is Chief Communications Advisor to Speaker of the House Paul Ryan. Last week – Was it only last week? – Buck got in hot water because he falsely denied that House Majority Leader Kevin McCarthy had said that Donald Trump and Rep. Dana Rohrabacher were being paid by Russia. When initially confronted, Buck flatly stated: “That never happened.” Confronted with the existence of a tape, Buck shifted gears to say that Rep. McCarthy was merely joking.

I’m glad Buck was called out for his lie. In fairness, this wasn’t entirely a lie. McCarthy was sort of joking. Of course, Buck’s comment wasn’t entirely truthful, either. The joke – to the extent it was a joke – rested on the accurate premise that President Trump and Rep. Rohrabacher are weirdly close to Vladimir Putin in a way that demands further scrutiny.

But here’s the real irony. Buck was humiliated over a lie that was far less significant – and really less of a lie – than many policy statements emerging from his own office that receive far less attention.

For example, Speaker Ryan issued a three-paragraph statement after the Congressional Budget Office’s original analysis of the American Health Care Act. Some excerpts are shown below. I’ve added numbers in brackets, for reasons that will be obvious:

“This report confirms that the [1] American Health Care Act will lower premiums and improve access to quality, affordable care …

“Under Obamacare, we have seen how government-mandated coverage does not equal access to care, and now [2] the law is collapsing. Our plan is not about forcing people to buy expensive, one-size-fits-all coverage. It is about giving people more choices and [3] better access to a plan they want and can afford …

“This week, a third House committee will debate the American Health Care Act as part of an open, transparent process. [4] We have set out a clear goal – to give every American access to quality, affordable care – and a clear plan to achieve it. Now we must keep our promise and deliver.”

All four bolded statements – and several others I won’t go into – are policy lies. They misrepresent the CBO’s original devastating analysis of AHCA, which was updated yesterday-and is even more negative in key respects – to reflect the final House bill.

When one accounts for health status and reduced subsidies and consumer protections, AHCA would greatly increase insurance costs for low-income and older Americans, and for people with preexisting conditions. The harm is particularly great in states that choose to waive protections currently included under ACA.

As yesterday’s CBO report noted, in those states:

People who are less healthy (including those with preexisting or newly acquired medical conditions) would ultimately be unable to purchase comprehensive nongroup health insurance at premiums comparable to those under current law, if they could purchase it at all

[A]bout one-sixth of the population resides in areas in which the nongroup market would start to become unstable beginning in 2020. That instability would result from market responses to decisions by some states to waive two provisions of federal law, as would be permitted under H.R. 1628.

[3] “… better access to a plan they want and can afford.” In March and again yesterday, CBO analysts computed that a 64-year-old with an income of $26,500 would see a whopping increase in net health insurance premiums from $1,700 to more than $13,000, and sometimes more depending on the state in which they live:

Average premiums for healthy people who don’t require subsidies may decline, but for two unfortunate reasons: Their insurance coverage would be less generous, and many older and sicker people would stop buying coverage they could no longer afford.

[4] “We have set out a clear goal – to give every American access to quality, affordable care – and a clear plan to achieve it.” CBO concludes that 14 million Americans would be left uninsured within one year of AHCA’s passage, relative to current law, with the increase in uninsured rising to 23 million by 2026. If AHCA is enacted, more Americans would be uninsured in 2026 than were uninsured when the Affordable Care Act was passed, reversing seven years of progress under ACA, and cutting Medicaid more deeply than merely repealing ACA would do.

Not lies, but additional misleading statements

Other statements are misleading, but are not clear lies. Consider, for example, “this legislation will provide massive tax relief.” The lion’s share of AHCA’s tax relief goes to Americans with family incomes that exceed $250,000 per year. Millions of Americans would experience a large tax increase through less generous affordability credits.

I could go on, but the point is clear. Which is worse: Covering up for a sort-of-joke about Trump being paid by Vladimir Putin? Or fundamentally mischaracterizing the clear implications of a bill that would snatch health insurance from millions of people?

If you tell a verified lie about some political scandal, you are in trouble in Washington. You can’t say “I did not have sex with that woman,” or “I did not have communications with the Russians” without consequence.

But if you lie about policy – for example to say that having Medicaid is no better than being uninsured, or that you are expanding access while leaving 23 million people without health insurance – you’ll usually get a pass. The disparate response to political lies and policy lies is one cause and symptom of our broken politics.