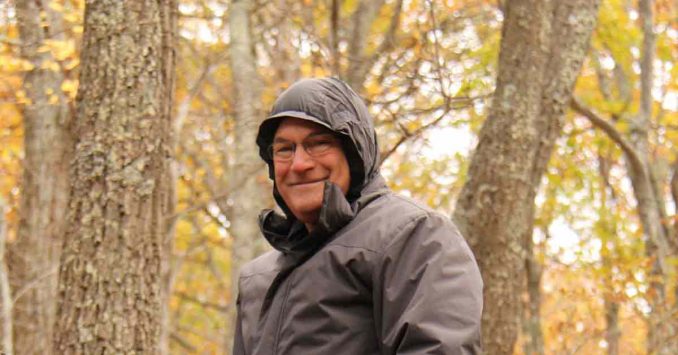 1,584,660 residents were covered by Medicare in Virginia as of December 2021. Most Americans become eligible for Medicare enrollment when they turn 65. But nationwide, there are 8.1 million people under the age of 65 who have Medicare coverage, accounting for almost 13% of all Medicare beneficiaries. This is because Medicare eligibility is also triggered once a person has been receiving disability benefits for 24 months, or has kidney failure or ALS. As of late 2021, about 195,000 Medicare beneficiaries in Virginia were under the age of 65, accounting for about 12% of the state’s Medicare population.

Medicare Advantage plans include the same covered benefits of Medicare Part A and Part B, and most plans include Part D prescription drug coverage as well as additional benefits such as gym memberships, nurse hotlines, and dental and vision coverage, as well as various other supplemental benefits.

But provider networks are smaller with Medicare Advantage plans, and although monthly premiums tend to be lower than they’d be with Original Medicare plus Medicare Part D plus a Medigap plan, out-of-pocket costs will tend to be higher if the person has just a Medicare Advantage plan. There are pros and cons to either option, and the right solution depends on each enrollee’s circumstances and preferences.

As of 2017, just 18% of Virginia Medicare beneficiaries were enrolled in Medicare Advantage plans; nationwide, the average was 34% at that point. As of December 2021, total private Medicare enrollment in Virginia (not counting people with private supplemental coverage like Part D and Medigap) stood at 473,538 people, or about 30% of the state’s Medicare population. Most of those enrollees had Medicare Advantage plans, but there are also some people in Virginia who have Medicare Cost plans, which are a type of private Medicare coverage. The other 1.1 million Medicare beneficiaries in Virginia had Original Medicare as of late 2021.

Between late 2019 and early 2022, Humana saw a 24.5% increase in Medicare Advantage enrollment in Virginia. With 142,469 Virginians enrolled in its MA plans in February 2022, the carrier had the highest market share – 30% – out of a field of 16 carriers selling MA plans in Virginia. 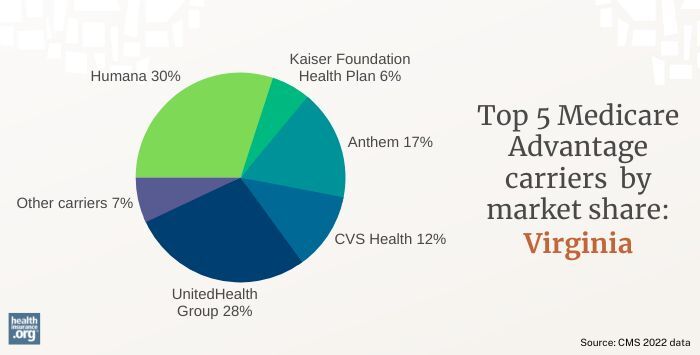 But for those who don’t, Medigap plans (also known as Medicare supplement plans, or MedSupp) will pay some or all of the out-of-pocket costs they would otherwise have to pay if they had Original Medicare on its own.

Medigap plans are sold by private insurers, but they’re standardized under federal rules and regulated by state laws and insurance commissioners. There are 42 insurers that offer Medigap plans in Virginia as of 2021.

Virginia allows Medigap insurers to pick their own rating approach, so nearly all of the plans for sale in the state use attained-age rating, which means that an enrollee’s premiums will increase as they get older, regardless of how old they were when they first enrolled (the other two approaches to Medigap premiums are issue-age rating, in which premiums are based on the age the person was when they enrolled, and community rating, which means premiums don’t vary base on age; some states require one of these approaches, but Virginia does not, so only a few insurers in the state choose those rating methods).

Medigap in Virginia if you’re under 65: Insurers have to offer at least one guaranteed-issue plan, but rates are much higher

In Virginia, 12% of Medicare beneficiaries (almost 200,000 people) were under age 65 as of 2021. The majority of the states have enacted rules to ensure access to Medigap plans for disabled enrollees under age 65; Virginia joined them with legislation that was signed into law in 2020 and took effect in 2021.

Under the legislation (SB250) that Virginia enacted, Medigap insurers in the state must offer at least one plan on a guaranteed-issue basis to Virginia residents who become eligible for Medicare prior to the age of 65 due to a disability. And people who were already enrolled in Medicare prior to 2021 had a one-time six-month open enrollment period, starting January 1, 2021, during which they could sign up for a Medigap plan under the new rules.

It’s noteworthy that there are a dozen states that require Medigap insurers to sell plans to beneficiaries under age 65, and also limit the premiums that can be charged for the coverage. But Virginia has not implemented rules to limit Medigap premiums for disabled beneficiaries.

Most of Virginia’s Medigap insurers have chosen to make Medigap Plan A available to disabled beneficiaries under age 65. But the premiums for these enrollees are much higher than the premiums for people enrolling in Medicare due to age. You can see the exact amounts here (note that the listed premiums are for a full year; divide by 12 to get the monthly cost). For Virginia beneficiaries who are age 65, Medigap Plan A has monthly premiums that tend to be in the range of about $100 to $160. But for a Virginia beneficiary who is under age 65, the monthly premiums for Medigap Plan A range from about $330 to $800 (most are in the range of $400 to $650 per month).

Disabled Medicare beneficiaries have access to the Medigap open enrollment period when they turn 65. At that point, they have access to any of the available Medigap plans, at the standard age-65 rates.

Eligibility under SB250 is based on disability as defined in U.S. Code § 426(b), which does not include people with kidney failure — their eligibility is defined in 42 U.S. Code § 426–1 instead. There are a few other states that require Medigap plans to be available to people under age 65 but specifically exclude people with end-stage renal disease. Notably, however, this is a population that is very much in need of Medigap coverage, as their 20% share of the cost of dialysis under Medicare Part B can become unaffordable very quickly. As of 2021, however, people with kidney failure can join Medicare Advantage plans, which do have caps on in-network out-of-pocket healthcare costs; prior to 2021, these beneficiaries could not join Medicare Advantage plans unless there was a special needs plan available in their area that matched their medical conditions.

Similar bills ( SB1351 in 2017 and SB161 in 2018) were introduced in Virginia in prior years but didn’t advance out of committee, but the legislation eventually succeeded in 2020.

In 2017, Virginia’s Joint Commission on Health Care conducted a study, led by Senior Health Policy Analyst, Stephen Weiss, to gather data and provide lawmakers with information related to the possibility of requiring Medigap insurers in the state to offer coverage to beneficiaries under age 65.

The JCHC study included surveying the state’s Medigap insurers; none of them indicated that they would exit the market if required to offer coverage to disabled beneficiaries under age 65, but more than half noted that if the state were to mandate coverage offerings for people under 65, the insurers would prefer that it be only Plan A, instead of all plan options (several states have taken this approach). And they also indicated that premiums would need to be between one and a half and five times higher for enrollees under the age of 65. Ultimately, however, JCHC voted to take no action on this issue at that point, and it wasn’t until 2020 that legislation was enacted to address it.

Once the law was enacted and implemented, it very much reflected what the insurers asked for: Only one plan has to be offered, and the premiums can be dramatically higher for the under-65 population.

But Medicare Part D, created under the Medicare Modernization Act of 2003, provides drug coverage for Medicare beneficiaries who do not have another source of coverage for prescription costs. Medicare beneficiaries can buy Medicare Part D plans on a stand-alone basis, or obtain Part D coverage integrated with a Medicare Advantage plan (not all Advantage plans include Part D benefits, but most do). Both options are available for purchase (or plan changes) during the annual election period that runs from October 15 to December 7 each year, with the new coverage effective January 1 of the coming year.

There are 23 stand-alone Medicare Part D plans for sale in Virginia for 2022, with premiums that range from about $7 to $97/month.

As of December 2021, there were 639,244 Virginia beneficiaries with stand-alone Medicare Part D coverage, and another 424,711 with Medicare Advantage plans that included integrated Part D coverage.

Medicare Part D enrollment is available when a person is first eligible for Medicare, and during the annual open enrollment period each fall, from October 15 to December 7. Plan selections and changes made during this window take effect on January 1.


How does Medicaid provide financial assistance to Medicare beneficiaries in Virginia?

Our guide to financial assistance for Medicare enrollees in Virginia includes overviews of these benefits, including Medicare Savings Programs, long-term care coverage, and eligibility guidelines for assistance.

Medicare in Virginia: Resources for beneficiaries and their caregivers

You can contact VICAP (Virginia Insurance Counseling and Assistance Program), with questions related to Medicare eligibility, enrollment, and coverage in Virginia.

The Virginia State Corporation Commission/Bureau of Insurance website offers a variety of information and resources about Medicare Advantage, Medicare Part D, and Medigap plans that are sold in Virginia. They can provide customer service, answer questions, and address complaints about entities they regulate, including health insurance companies and the brokers/agents who sell policies in the state.

This guide to Medicaid assistance for Medicare beneficiaries in Virginia is a useful resource that explains the various programs available to people with low income and asset levels, and how to apply for assistance.

Medicare Rights Center is a nationwide service, with a website and call center, where Medicare beneficiaries can get answers to their questions and assistance with understanding the eligibility and enrollment process for Medicare.