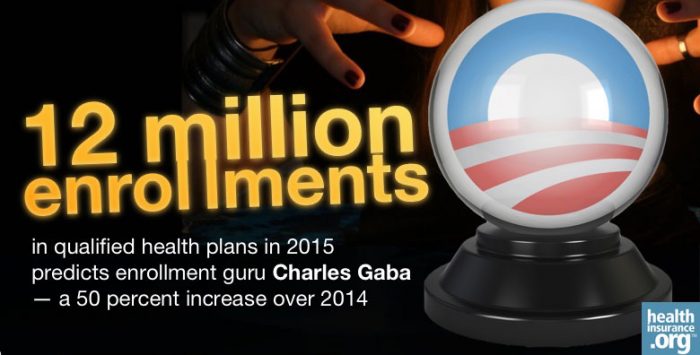 Those familiar with my work know that I gained a reputation for pretty accurate ACA enrollment predictions last year, either by milestone (what day QHP enrollments would hit X million) or by time (the number of enrollments as of X date). Over the summer I was also pretty accurate with off-season estimates and so forth.

This put a lot of pressure on to get the 2015 open enrollment period accurate as well. There’s a ton of differences, however, ranging from millions of people having to re-enroll to fewer “desperate” enrollees, to a tougher political landscape … but the biggest difference is that I’m trying to project all three months of the 2015 period at once instead of just one month at a time. All of this adds another level of uncertainty.

Having said all of that, on Friday morning I posted my Official 2015 #OE2 QHP Enrollment Projection at my own website.

The short version is this: The HHS Department thinks there will be about 9.1 million paying QHP enrollees out of about 10.4 million total. CBO is projecting 13 million. Insurance companies are all over the map, figuring on increases of as low as 20 percent or as high as 100 percent, though the range seems to be anywhere from a 30 to 80 percent increase over last year.

Me? I’m fairly confident, but also cautious. I’m essentially splitting the difference and going with 12 million total, of which I believe around 10.6 million will pay.

Simple math shows that this comes out as roughly a straight 50 percent increase over the 2014 numbers. I didn’t mean to make it that straightforward, that’s just the way it happened based on the evidence at hand. Sometimes life works out that way.

The response has been mostly muted so far, although one reporter took this to mean that I was projecting “at least 2 million more” than HHS Secretary Burwell. (My number is actually only 1.5 million higher.) He quickly issued the correction – it turns out he was confusing my “total” number with HHS’s “paid” number, an understandable mistake given that HHS’s press release was a bit unclear itself.

I bring this up not to embarrass anyone but to illustrate the importance of taking a close look at the context of the numbers being tossed around. In fact, if you watch the video below I admit to having made the same mistake myself at first.

I also, for the heck of it, did a state-level breakdown projection as well. The real numbers are unlikely to line up so perfectly, but I’ve never done that before and it seemed like a fun challenge.

What it all means

The important thing to remember, however, is this: As I noted in an earlier piece, while the number of people who enroll on the exchanges does have some importance for logistical, PR, marketing and, yes, budgetary and actuarial reasons, the real significance here is that

1) there are millions more people who are covered by the ACA through other means as well, and

2) every person enrolled – whether it ends up being 9 million, 12 million, 13 million or whatever – is one more person who doesn’t have to worry about going bankrupt due to medical bills.

You can read my full breakdown/rationale here.