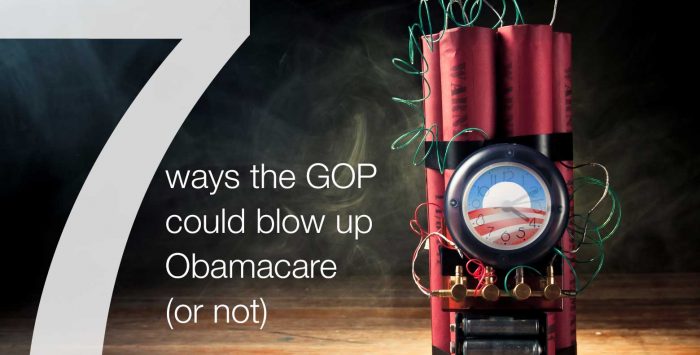 Editor’s note:  While we were preparing this post for publication, The Washington Post published the gist of an interview with President-elect Trump in which he claimed that his administration is putting the finishing touches on a health reform plan that would provide universal access to affordable, low deductible coverage. That seems wildly out of keeping with existing Republican plans, all of which repeal the taxes that provide much of the funding for Affordable Care Act benefits – and therefore offer skimpier benefits.

One possibility is that the plan will offer low-income people health plans with low deductibles but tight caps on how much the plan will pay. Other possibilities (including that Trump is simply blowing smoke) are sketched out here.

Late last week Republicans in the Senate and House passed a budget resolution instructing themselves to write “ACA repeal-and-delay” legislation. That legislation would repeal the ACA marketplace subsidies and Medicaid expansion, but delay the repeal for two or more years while a replacement bill is theoretically written.

This week’s resolution was just round one. The hard work of writing bills that spell out the terms of repeal – and that can pass the Senate and House – is yet to come. While Republicans would need 60 Senate votes to pass a full repeal and replacement of the ACA, they can enact a partial repeal with a simple majority and avoid a Senate filibuster by a process known as “budget reconciliation,” which can be used only for legislation that directly affects the federal budget. In 2015, Republicans passed such a partial repeal in a “dry run” that President Obama vetoed.

In short, Republicans can gut the ACA with 51 votes, but they need 60 votes to pass anything like a full replacement – unless they also act to end the filibuster. But getting to 51 is uncertain. Though there are 52 Republican senators, about a dozen of them have expressed reservations about repealing core ACA benefits – mainly the Medicaid expansion and subsidies for private plans purchased in the ACA marketplace – without a replacement in hand.

So how will their efforts play out? Here are some possible scenarios, listed worst-to-best from the point of view of someone who wants to maintain affordable coverage for as many people as possible.

Republicans swiftly pass repeal-and-delay via budget reconciliation, all 52 Republican senators holding together in a block. While repeal of subsidies is delayed, repeal of individual mandate (requiring people to obtain health insurance or pay a tax penalty) is effective immediately, along with repeal of taxes that largely fund ACA benefits.

The repeal of the mandate collapses the ACA marketplace and the broader “individual market” for health insurance, leaving about 20 million Americans high and dry. Republicans blame Democrats, endlessly repeating Paul Ryan’s false assertion that the marketplace was already in a death spiral. Gridlock ensues. Repeal of funding for the ACA Medicaid expansion goes into effect after two (or more) years, reducing Medicaid enrollment by 12 million or more.

Republicans then fulfill a longstanding goal by “block-granting” Medicaid – that is, giving each state a fixed amount of money rather than paying a percentage of the cost for each person the state enrolls. That means less money for Medicaid, since the block grant is designed to grow more slowly than the rate of medical inflation. Medicaid rolls shrink by another 14-20 million through the block-grant’s gradual squeeze. Taking all this together – collapse of the individual market and shrinkage of Medicaid – the ranks of uninsured swell by 40-50 million.

Marching to Trump’s orders to make repeal-and-replace swift and simultaneous, Republicans change Senate rules to end the filibuster (which effectively makes 60 votes necessary for any bill to pass the Senate) and pass a bill very much like HHS Secretary nominee Tom Price’s repeal-and-replace plan. That plan immediately repeals the Medicaid expansion and replaces ACA marketplace subsidies with skimpier subsidies that vary by age but not income. It also deregulates the individual market, allowing far less comprehensive coverage to be sold than what is required in ACA-compliant plans. In light of Trump’s latest promises noted above, it’s possible that the Price plan will include “mini-med” plans for the poor that offer low out-of-pocket costs until the enrollee hits a low annual or lifetime coverage cap.

Here too, Republicans block-grant Medicaid. Medicaid enrollment drops by 12 million upon repeal and by another 14-20 million over a decade. The individual market reverts to pre-ACA state, boosted modestly by flat subsidies that make coverage more affordable for more affluent buyers but leave it unaffordable for those with lower incomes.

Republicans pass repeal-and-delay, but with enough short-term support for the individual market to prevent a total collapse (e.g., by delaying repeal of the individual mandate). Democrats sign on to a limited replacement, with skimpier subsidies in a deregulated individual market and a somewhat delayed squeeze on Medicaid enrollment – for example, via Paul Ryan’s proposed “per-capita” caps on the federal contribution. Under that system, the federal government sets a limit on how much its contribution per-enrollee can grow – a limit that likely won’t keep up with medical inflation.

The national uninsurance rate rises gradually. Lower-income marketplace enrollees get skimpier coverage that costs them more, rendering insurance unaffordable to some and necessary care unaffordable to some of the insured. Some middle-income and affluent enrollees fare better than they would under the ACA – unless they somehow fail to maintain continuous coverage, opening the door for insurers to charge them more if they have a so-called “pre-existing condition.”

Republicans pass repeal-and-delay – but, nervous about collapsing markets, delay repeal of the ACA’s taxes and mandates along with benefits. They also take measures to shore up the individual market in ways requested by the insurance industry. These include improving the risk adjustment formula by which federal payments to insurers are adjusted according to how much medical care their enrollees consume, and tightening the rules under which insurance seekers can obtain a “special enrollment period” outside the yearly “open enrollment” period.

Democrats, granted considerable leverage as the marketplace remains viable, sign on to a “repeal” with relatively modest changes – maybe giving states more freedom to design alternative means to cover their citizens (which they can already do under comparatively tight federal oversight via the ACA’s innovation waivers). This scenario is pretty much on a continuum with #3.

Same as #4, but gridlock ensues and the ACA keeps getting renewed at intervals, probably with adjustments tacked on to each renewal. The ACA marketplace and larger individual market might actually strengthen over time under this de facto truce.

Republicans can’t get repeal-and-delay done, as a gang of six Republican senators holds out for simultaneous repeal-and-replace. Gridlock ensues; the ACA limps along. Republicans either kill the marketplace by neglect, out of spite, refusing to regulate insurers adequately or address their concerns – or else they gradually, grudgingly allow it to be shored up.

Trump blows up the whole system (or world) in some unpredictable way.

I won’t pretend to have a clue which scenario (or blend of them) will play out, but I do believe that #6 is worth fighting for. More than ten Republican senators have expressed qualms about repeal-and-delay; at least five Republican governors have warned about the ill effects of ending the ACA Medicaid expansion.

While no Republican senator will cop to not wanting to repeal the ACA, at least three may well hold out for simultaneous repeal-and-replace. Since that would require 60 votes under current rules, it will not happen unless 1) Republicans end the Senate filibuster, 2) Republicans win 60 Senate seats in 2018 or beyond, or 3) the “replacement” is all but indistinguishable from the repealed bill.