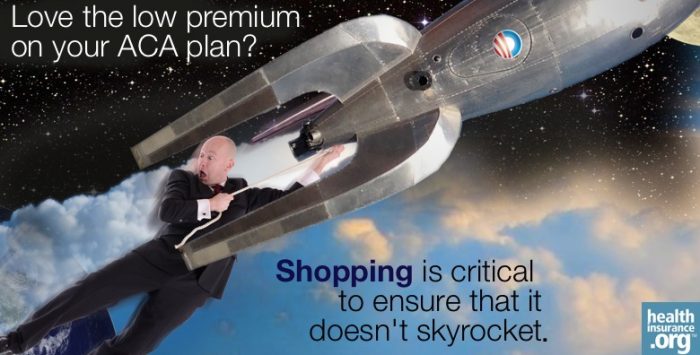 Want a sense of how the Affordable Care Act’s plan-renewal problem plays out? Zoom in on Philadelphia.

Emily Van Yuga, an ACA outreach and enrollment coordinator for the Health Federation of Philadelphia, which operates community health clinics in southeast Pennsylvania, told me that clients who last year were paying literally pennies per month for the cheapest Silver plan got 2015 renewal letters this fall from Independence Blue Cross announcing jaw-dropping price hikes. One family that was paying 30 cents a month this year received a renewal letter for 2015 quoting $76 per month – “but their actual cost would be $196 per month.”

On the plus side, this means that almost none of HF’s clients are sitting still for auto-renewal, which happens if 2014 plan buyers take no action. They will pay more this year than last – but not that much more. But how is such a wild price swing possible – not to mention such a misleading letter from the insurer?

The volatility stems from the fact that subsidies, calculated to leave a buyer paying a fixed percentage of her income for monthly premiums, are keyed to the second-cheapest Silver plan; those who buy more expensive plans have to pay the difference. If this year’s second-cheapest Silver costs less than last year’s, the subsidy shrinks. If that happens, and your current plan goes up in price and loses benchmark status, you not only pay the price hike, you pay the difference between last year’s subsidy and this year’s. Thus it’s essential for 2014 plan holders to shop anew in 2015.

Last year, low-income buyers in Southeast Pennsylvania got a windfall; this year they get a double whammy. To understand the windfall, you have to keep in mind that low-income buyers have a strong incentive to buy Silver plans rather than the low-premium, high-deductible bottom-tier Bronze plans. That’s because Silver plans, and only Silver plans, come with steep Cost Sharing Reduction (CSR) subsidies that radically reduce deductibles and copays for buyers with household incomes below 200 percent of the federal poverty level. (Much weaker CSR is offered to buyers between 200 and 250 percent FPL.) CSR can save a low-income family thousands in actual medical costs. Buying Silver can be a hard swallow, though, because the premiums are usually significantly higher than for Bronze plans. But not in southeast Pennsylvania in 2014.

The windfall stemmed from the fact that the cheapest Silver plan in the region, Independence Blue Cross’s Keystone HMO Silver Proactive, was much cheaper than the benchmark second-cheapest plan (also a Blue Cross HMO), to which the subsidies are keyed. The difference was large enough to all but zero out the premium for a lot of low-income buyers.

Last year, almost all of Health Federation’s clients who were eligible to shop in the marketplace bought the cheapest Silver – which, thanks to CSR, had a deductible of $0 and wonderfully low copays – but also cost most of them nothing or next to nothing in premiums. This year, however, that plan’s premium spiked about 15 percent. It’s now the fourth-cheapest Silver, well above the benchmark.

Anatomy of a $200/month price swing

I did not get details from Van Yuga about the circumstances of the family in her spontaneous example – a free plan this year, a $196 premium for the same plan next year. But using HealthCare.gov’s shop-around features for 2014 and 2015, I found circumstances that roughly fit the specs (as several different scenarios might).

The double whammy for 2015 is that 1) this year’s benchmark plan, sold by United Health, is cheaper than last year’s, so the subsidy dropped, and 2) there is almost no price spread between the cheapest and the second-cheapest Silver plans (just a dollar or two). Subsidized buyers could get a $0-premium plan, but it would have to be Bronze, which means deductibles in the $5,000 range.

Returning to our family of three, the Paynes: This year, if their income remains the same, their subsidy drops to $1,072 from $1,208, because they second-cheapest Silver has a base price of $1,153, vs. $1,294 for last year’s benchmark. Moreover, there’s no real premium-price bargain to be had on the cheapest Silver plan, because its base price is just $2 less than the benchmark’s. That cheapest Silver plan will cost them $79 a month, a shade less than the benchmark $82, which would be 3.7 percent of their income. CSR still knocks their out-of-pocket costs to enviable levels. It’s a very fair deal, but costs them a bit more than $1,000 more than last year.

Auto-renewing their 2014 Blue Cross plan would really slam the Paynes, however. As indicated at the outset, that plan would now cost them $196 per month. The insurer would misquote the price to them, moreover, because insurers are allowed to assume that the Paynes would get the same subsidy as last year. (With last year’s subsidy of $1,208, the Paynes would owe $60 per month.) In fact, the Paynes could continue making monthly payment as if their subsidy had not changed – until they file taxes for 2015, at which point they would retroactively owe the difference. That is an “opportunity” that needs to be rectified in coming years.

An extreme case, but telling

To put this example in perspective, the price swing is magnified because 1) there’s three family members, and 2) two of them are at the upper end of the age scale, where unsubsidized premiums are more than twice those paid by younger adults. It’s further magnified by the somewhat anomalous spread in 2014 between the cheapest and second-cheapest Silver plan in this region, and by a steep, but not particularly unusual, climb in the Blue Cross plan’s premium. An extreme case, but a very real one.

To swing the lens out further: according to Van Yuga, in the ACA’s first open season the Health Federation had to turn away 80 percent of insurance-seekers empty handed, because they fell in the “Medicaid gap” – that is, they qualified for Medicaid according to the ACA’s original design, but qualified for nothing because Pennsylvania had refused the Medicaid expansion after the Supreme Court gave states the choice. Those with household incomes under 100 percent FPL are mostly ineligible for subsidized coverage in private plans. Pennsylvania has embraced a “private option” Medicaid expansion for 2015, however (which the incoming governor, Democrat Tom Wolf, has vowed to switch back to traditional Medicaid) – which means that families with incomes under 138 percent FPL will be eligible for Medicaid.

Van Yuga says that most of Health Federation’s private-plan 2014 clients – those who earned just enough to escape the Medicaid gap last year but less than 138 percent FPL – will be eligible for Medicaid (“private option” or otherwise) in or after 2015. (To make my example of the Paynes work, I had to keep upticking the family income to over 138 percent FPL – otherwise, I’d get “may be eligible for Medicaid” notices and subsidy-free private plan quotes.)

Others will pay more for private plans, albeit with generous CSR. Let’s hope that next to none auto-renew.