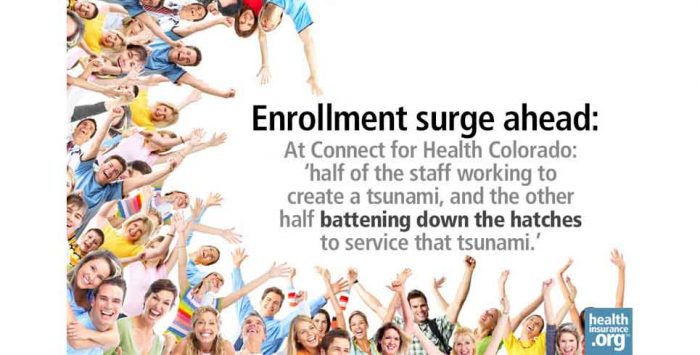 All across the country, there are health insurance exchanges that are putting up great numbers, providing terrific customer service, and reducing the percentage of uninsured Americans. Some of them are unexpected successes, while others have been leading the way since well before open enrollment began in October.

With 2½ weeks remaining in open enrollment, Families USA hosted their latest teleconference featuring representatives from six of the country’s most successful state-run exchanges. They have overcome technological hurdles, dealt with massive volume, created innovative marketing strategies, and worked tirelessly to make open enrollment a success. And it’s certainly paying off.

Patty Fontneau, CEO of Connect for Health Colorado, described how her team has “half of the staff working to create a tsunami, and the other half battening down the hatches to service that tsunami.” They have enrolled nearly 240,000 people so far, including Medicaid and private qualified health plans (QHPs). The exchange is operating walk-in sites, has an outreach RV on a state-wide tour, has partnered with hospitals and libraries, and even airs medical TV dramas to encourage people to enroll.

Connect for Health Colorado has doubled its customer service capacity since the end of December. Some nights, the exchange is open until midnight, and they will be open seven days a week from now until the end of the month. Fontneau calls it a “concentrated push both to create the demand and to handle it” and it’s obviously working: any way you do the math, Connect for Health Colorado is on track to meet or exceed goals.

Focused on numbers, not demographics

Connecticut was faring better than most of the country prior to 2014 in terms of the number of people without health insurance. The total was around 286,000 before open enrollment, which is only about 8 percent of the state’s population. (The national average was about twice as high.)

As of March 1, the exchange had enrolled 160,589 people (62,507 in QHPs and the rest in Medicaid/CHIP), although it’s not clear yet how many of them were previously uninsured.

Access Health CT CEO Kevin Counihan said the exchange is working with Yale University to conduct a sampling poll after the end of March, to determine how much the uninsured rate in CT has dropped during this first open enrollment.

Counihan also stressed that ACA implementation is a multi-year process, and that the goal is to enroll as many people as possible, worrying less about the demographics like age, and more about total numbers. Since October, much ado has been made over what percentage of each exchange’s enrollees are “young invincibles” (age 18-34), but Counihan’s approach makes a lot of sense: Focus on big enrollment numbers, and the demographics will work themselves out over time.

Bill Nold, Deputy Executive Director of Kynect, noted that prior to open enrollment, Kentucky had about 640,000 uninsured residents. They plan to conduct a study after open enrollment ends to see how much of a dent they’ve made in that number, but total enrollment through Kynect is currently just under 300,000, so it’s likely that they’ve made significant progress.

About 60,000 of those enrollees selected a private QHP, and the rest are enrolled in Medicaid/CHIP. Nold explained that Kentucky is committed to the idea that everyone needs insurance, and they’re just as proud of their Medicaid enrollment success as they are of their QHP numbers.

New York State of Health had enrolled nearly 600,000 people as of Monday, and Lisa Sbrana, Counsel for the exchange, noted that 70 percent of those enrollees were previously uninsured. New York has 8,500 assisters (navigators, certified application counselors, agents and brokers) across the state working to enroll people, and a huge amount of outreach and advertising.

They’re increased their call center staffing by 300, and are working to contact people who have started an application but have not yet enrolled. They’re expecting a big enrollment surge towards the end of March, and are working hard to ensure that they can provide assistance to everyone who still needs to enroll.

As of March 6, Washington Healthplanfinder had enrolled 446,787 people; 109,021 had selected private QHPs, and the rest were enrolled in Medicaid. In addition, the exchange has renewed existing Medicaid coverage for another 350,000 people. Richard Onizuka, Washington Healthplanfinder CEO, explained the outreach and marketing the exchange is doing in the final weeks of open enrollment – an all-out effort they’re calling the “March to Coverage.”

A similarly aggressive marketing campaign is going on in California. Covered California CEO Peter Lee described their new “Days of Action” campaign, reaching out to residents – especially Latinos – who haven’t yet enrolled in coverage. March 31 is the end of open enrollment and it’s also the birthday of labor and civil rights activist Cesar Chavez. The Days of Action advertising campaign features Dolores Huerta, co-founder (with Chavez) of United Farm Workers, in an effort to raise awareness about the exchange and the benefits of enrolling.

Strong outreach has been paying off in California for months; Covered California has by far the highest enrollment of any exchange. As of March 1, they had enrolled just under 869,000 people in private plans (20 percent of the entire country’s total), and 1.1 million in Medicaid.

There is no doubt that there will be a surge in enrollment volume all across the country over the next two weeks. Fontneau mentioned that numerous applicants – especially younger ones – are still saying “I have until the end of March, right?”

That’s true, and exchange staff will be putting in long hours between now and the end of the month to enroll people who still needs coverage. But it’s better to avoid the rush. Don’t wait until March 31 to start your enrollment. Contact a broker or go to your state’s exchange site today and get it taken care of. The process is far easier than it was last fall, and the peace of mind that goes along with having health insurance is priceless.