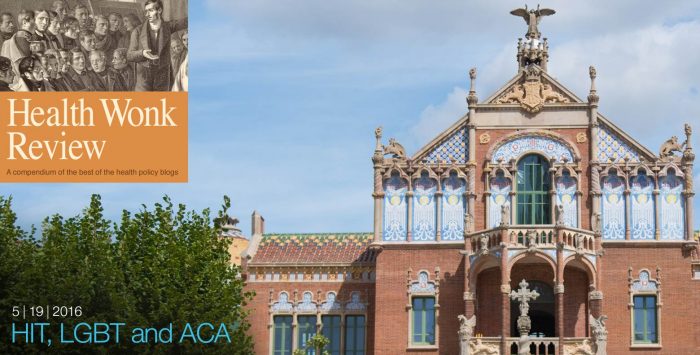 Just a heads-up that the latest edition of Health Wonk Review – one of the web’s finest compendiums of health policy – is posted over at Boston Health News. Thanks to Tinker Ready for a great round-up – and also a lovely collection of her photos from the former home of the Hospital de la Santa Creu i Sant Pau in Barcelona.

As Tinker notes, the 14 posts in this edition are sort of all over the place: insurance, HIT, report cards, LGBT health and cancer. (Thanks to Tinker for including Amy Lynn Smith’s post, Obamacare’s anti-discrimination protections fortified – a great explainer of the recent HHS-issued final rule on Section 1557 of the Affordable Care Act, which has removed one more roadblock to full healthcare equity for the LGBT community.)

For health reform fans like us, there’s lots of good stuff in here: In addition to Amy Lynn’s post about the impact of health reform, Louise Norris looks at the Simple Choice Plans in the federally facilitated exchanges, Charles Gaba digs into individual market rate hikes, and Henry Stern notes that ACA’s Bronze plans may be “on the chopping block.” Oh, and Tom Lynch has some Obamacare news from  Oklahoma.

As always, there’s more in the edition than health reform. Definitely give it a read.

See you next time – when David Harlow hosts HWR at HealthBlawg on June 2.