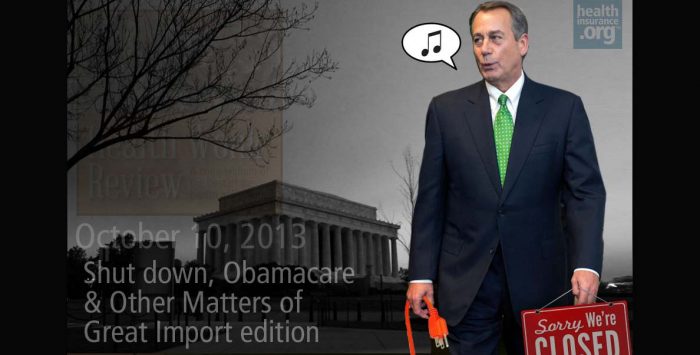 Have you heard the story about the launch of Obamacare’s health insurance exchanges? No?

What about this other big story … about how a group of Congressional Republicans hate Obamacare so much that they were willing to do anything – even shut down the U.S. government – to delay implementation of the legislation (even though millions have been desperately trying to enroll through the exchanges)? What? No? You missed that?

Of course you’ve been following the seemingly endless coverage of the two events we’ve all been anxiously awaiting … and dreading. (I’m talking about awaiting Obamacare and dreading the shutdown, but I can understand that some readers may have those reversed.)

The good news is that in addition to all of the hot air that’s stinking up the news channels, there’s been plenty of really fresh air generated by the Health Wonk Review’s veteran crew of health policy wonks. Joe Paduda, over at Managed Care Matters, obviously put some serious time into compiling the latest edition, which is chock full of analysis about the October 1 launch of the ACA’s exchanges … their short-term successes, the prognosis for their long-term success, and even advice on how to shop in the exchanges.

The government shutdown effected by House Republicans is ample evidence that lots of folks definitely aren’t celebrating the arrival of the exchanges. This edition of HWR explains why some Republicans hate the ACA sooooo much (or maybe it’s just a “general distaste for government and government expansion“), and what their hate-fueled stubbornness could mean to our economy and also to workplace health and safety.

There’s also a really great piece from healthinsurance.org contributor Louise Norris, who explains beautifully why – despite the fact that her family stands to spend more for coverage through the ACA’s exchanges – she supports the health reform law. (And there’s a whole lot more.)

Trust me … you won’t want to miss this workerscompinsider.com/…/government-shut-1jam-packed edition of Health Wonk Review.