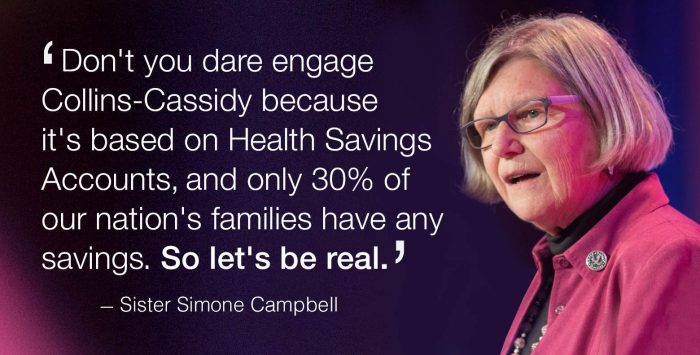 In the closing minutes of Health Action 2017, Families USA’s annual conference, I suggested a way to slow the ACA repeal train – and was rebuked by one of the Nuns on the Bus.

It happened like this. Just prior to Sister Simone Campbell’s closing plenary speech, incoming Families USA executive director Frederick Isasi was talking political strategy: how to preserve all or most of the ACA’s coverage gains as Republicans struggle toward repeal. Isasi is a political insider – until recently a director of the National Governors Association, previously an aide to Senator Jeff Bingaman (D-N.M.) on the Senate HELP and Finance Committees, involved in drafting the ACA.

ACA defenders’ top goal at present, Isasi said, is to “make Republicans work through the legislative process as slowly as possible … Our action should lead to inaction.” The aim of Republicans driving the repeal train, he said is to “pull a trillion dollars out quick” – that is, repeal the ACA taxes that fund its core benefits and make that repeal effective immediately, leaving inadequate funds for any future replacement and effectively defunding the ACA Medicaid expansion in particular.

Many Republican senators have expressed qualms about that quick gutting, and a handful of Republican governors in states that have expanded Medicaid have urged their colleagues in Congress not to roll the expansion back. Isasi urged his audience of healthcare advocates to raise the alarm about the Medicaid expansion in particular. “Many governors are concerned but don’t quite get it yet … they’re facing 10 to 15 percent cuts on the state level.” Nursing homes and other medical industries are scared, he noted.

The longer the repeal process takes, the more those qualms will grow. “If repeal and replace don’t happen at once, the battle is 60 percent won,” Isasi said.

A slower train to hop aboard?

All this put me in mind of an ACA reform bill introduced by relatively moderate Republican senators who are nervous about un-insuring millions. The so-called Patient Freedom Act (PFA) put forward by Republican Senators Bill Cassidy of Louisiana and Susan Collins of Maine, with support from Johnny Isakson, R-Ga. and Shelley Moore Capito, R-W.Va., is at the opposite end of the Republican spectrum from the bare-bones replacement plan outline recently floated by Paul Ryan, which provides skimpy premium subsidies that don’t adjust for income, repeals the ACA Medicaid expansion and eviscerates Medicaid funding over the course of a decade. The PFA, in contrast, preserves the ACA’s taxes and allows states to continue with the Medicaid expansion – and, if they prefer, with the ACA’s income-based premium subsidies and coverage rules.*

In fact the PFA does not repeal the ACA. It puts in place – and fiscally favors – a conservative system of subsidizing insurance, centered on government-funded Health Savings Accounts (HSAs) to be used in a deregulated market where catastrophic plans feature prominently. Roughly the same subsidy pot (95 percent of the ACA allotment) would be extended much further up the income scale, presumably weakening subsidies for lower-income enrollees. States can choose between the HSA-centric scheme, the existing ACA marketplace structure, rejecting federal funding and regulating the individual insurance market as they will, or basically any alternative of their own devising via “innovation waivers,” an ACA provision that would not be repealed.

I asked Isasi in a Q&A period following his talk if Democrats in Congress should probe whether the Cassidy-Collins bill could be a basis of negotiation – if only to keep Republicans from ignoring it, as they seem inclined to. Such talks might induce at least a small group of Republican senators to refrain from signing on to a swift gutting of ACA funding via budget reconciliation, without any Democratic support.

“I can’t answer that,” Isasi responded promptly, pointing out that he had not yet taken the helm at Families USA. But then he went on, “If there’s a way to protect the core ACA’s funding in the budget baseline [as the PFA does] that has to be top priority.” He added that ACA proponents should keep their focus not on the ACA per se but preserving care for those the law aims to serve.

If you’re on the bus, you’re off this train

Shortly afterward, Isasi introduced Sister Simone Campbell, a heroine of ACA passage. As executive director of NETWORK, a Catholic group advocating for economic justice, she authored a letter in support of the ACA in early 2010, signed by many influential Catholic groups, that was widely credited with being crucial to passage. She also initiated the ongoing Nuns on the Bus campaign to mend gaps in income inequality.

Sister Simone spoke movingly about her approach to social advocacy, urging the audience to open their ears and hearts to people of all kinds, hear their stories, then tell those stories. But first she add-libbed a “close your ears” message about the Cassidy-Collins bill:

I have to confess, Frederick, after that great presentation I wanted to … say don’t you dare engage Collins-Cassidy because it’s based on Health Savings Accounts, and only 30 percent of our nation’s families have any savings. So let’s be real.

With respect to the merits of HSAs, which are tied to high deductible health plans, I could not agree more. HSAs are the quintessential Republican nostrum, in that pious policy goals – reducing unneeded care, making smart shoppers of consumers – are deployed in service of a gift to the “One Percent”: yet another vehicle for tax-free savings. HSAs are central to the theory that the way to control healthcare costs is to make consumers responsible for a higher share of those costs, and so reduce the government’s role in cost control.

An American Enterprise Institute ACA replacement plan published in 2015 lamented that patients’ share of healthcare costs has dropped from 48 percent in 1960 to 11.6 percent in 2010. To HSA proponents, “patient freedom” means the freedom to shoulder much higher out-of-pocket costs. They also assert that the relatively low prices for care paid by Medicaid and Medicare are responsible for high costs rather than a brake on them.

An unrepentant pitch for healthcare peace

All that said, I believe Sister Simone should open her heart to Senators Cassidy, Collins et al and recognize that they want to do far less harm than most of their Republican colleagues in Congress – and that by working with them, Democrats may strictly limit if not entirely avoid reversal of gains made under the ACA. Sister, please consider:

It contains not just one but three approaches to replacing the individual mandate. It creates a new form of high-deductible “default health insurance” in which states could auto-enroll the uninsured, and a scheme that would make insurers subsidize their competitors if enrollees switch plans. The PFA sets out a series of different algorithms for calculating the subsidies states would receive depending on the options they chose and pages of detailed new rules to govern its “Roth HSAs” …

“The bill,” Jost concludes, “appears to have been rushed into legislative language without adequate consideration of how it would actually work and what it would cost. It may form a basis for discussion, but it is not ready for enactment.” It would seem to open the door, however, for a more streamlined, “superwaiver”-type amendment to the ACA.

It may be argued that Republicans will never go for the Cassidy-Collins bill. That’s true for most Republicans in Congress. To gut the ACA via budget reconciliation, however (a maneuver that allows Republicans to avoid a filibuster), Republicans still need the votes of 50 senators. They can’t pass an insta-repeal if three Republican senators balk – and the PFA has four sponsors. More to the point, at least a dozen Republican senators have expressed qualms about repealing the ACA without a replacement in hand, or repealing the law’s taxes without simultaneously replacing the revenue. If a serious discussion develops around Cassidy-Collins, those Republicans who don’t want insta-repeal may gain critical mass, enough to embolden at least three holdouts against insta-repeal.

Action from Democrats with respect to Cassidy-Collins may lead to the inaction Isasi seeks. Or to the least harmful action attainable. Or even, by serving as a vehicle for armistice, to action that at least clears the way for future bipartisan efforts to improve existing systems.

* Under the PFA, states that make the basic choice to preserve the current ACA structure also preserve the option to apply for an ACA “innovation waiver” to change the structure of the marketplace, subsidies, mandates or other features. Under the ACA, the alternatives proposed in waiver applications must provide coverage “at least as comprehensive” as that defined by the ACA and protections against excessive out-of-pocket spending that render coverage at least as affordable as stipulated by the ACA. Waiver proposals must also cover “at least a comparable number” of the state’s residents and must not increase the federal deficit.