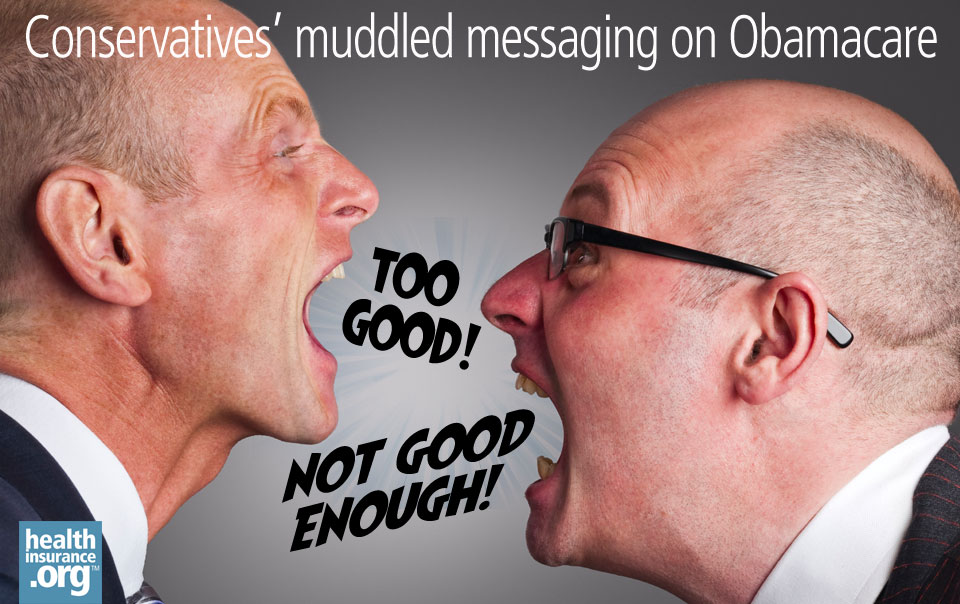 Yet another catchy phrase, “Medicaid for the middle class,” is popping up in conservative propaganda. What are Obamacare’s opponents trying to say?

Those who have latched onto this catchphrase make two very different arguments. The arguments actually contradict each other, but they have one thing in common: Both are untrue.

#1 ) Obamacare isn’t good enough because the coverage families will receive in the exchanges will limit them to a tiny network of providers.

Originally, conservatives claimed that Obamacare would be too expensive. Americans who tried to buy insurance in the exchanges would experience “Sticker Shock!” Now that states have begun to announce premiums, it’s becoming apparent that this isn’t true.

So conservatives have regrouped. In an about-face, they are acknowledging that some plans offered in the exchanges may be affordable, but this, they say, is because insurers are limiting their networks to providers who will accept lower fees.

Nevertheless, CHCF says, “Many people are expected to choose narrow-network plans that offer a limited choice of doctors, clinics and hospitals … because the cost will be less.”

Note that, while grousing about “limited choice,” CHCF predicts that patients will “choose” narrow networks.

When you’re fibbing, it’s easy to begin contradicting yourself. The truth is that people who have not been able to afford insurance in the past are far more interested in price than they are in the size of the network.

Moreover, many Baby Boomers already have embraced HMOs: they charge less when a patient stays “in network,” and the best focus on keeping patients healthy.

Everything turns on who is included, who is left out – and why.

In the exchanges, insurers will be competing on price. As a result, carriers are pushing back against providers that over-charge – including brand-name hospitals that demand far more for very simple procedures.

Both insurers and “employers are sending a message that they are no longer willing to pay for hospitals that charge higher rates for routine services to cover costs of their teaching and research missions,” Kerr adds.

For example, employers (in this case the city of Los Angeles)  as well as exchange insurers are rejecting LA’s pricey Cedars-Sinai Medical Center.

Cedars-Sinai boasts a reputation as “hospital to the stars.” Among the nation’s 50 top-grossing non-profit hospitals, it ranks third. But this does not necessarily mean that it provides superior care. In 2012 when the Joint Commission released its list of the Top Performers on Key Quality Measures, Cedars-Sinai did not make the cut.

By contrast, Kaiser Permanente’s hospitals stand out on the Joint Commission’s list. Little wonder that the exchanges are embracing Kaiser. Not only does Consumer Reports gives Kaiser stellar marks for quality,  the premiums Kaiser will be charging California’s 40-year-olds for a Silver Plan are among the lowest in the state.

#2) Obamacare is too good (too generous)

As 11th-hour conservative hysteria mounts, Rush Limbaugh, et. al. are now claiming that under Obamacare, multi-millionaire early retirees will be able to sign up for Medicaid. This, they argue, is another example of how the ACA offers “Medicaid for the Middle-Class.”

Under the Affordable Care Act, it turns out that regulators don’t count Social Security income when deciding who qualifies for Medicaid. Thus reform’s critics fantasize that a 62-year-old couple with $2 million in assets, each receiving $23,500 in Social Security income (the maximum for high earners), and less than $17,000 in other taxable income, will wind up on Medicaid’s rolls.

First, find me a couple with $2 million in savings, each of whom have been high earners for 40 years, and now have just $17,000 in taxable income other than Social Security.

More to the point, find me a pair of affluent 62-year-olds who would be willing to limit their circle of doctors to the one-third who will open their doors to new Medicaid patient.

Finding a specialist could be particularly difficult. If our 62-year-old millionaires settled for Medicaid, they could easily find themselves sitting in the basement of a hospital, surrounded by the poorest of the poor, waiting to see a resident. (In many hospitals, only residents staff the clinics that take Medicaid patients.)

Still, Medicare actuary Richard Foster (never a fan of Obamacare) told AP that he “lays awake at night worrying that these people will wind up on Medicaid,” ripping off taxpayers.

Yet the actuary’s own office acknowledges that its $64,000 example would represent an “unusual case.”

To say the least.