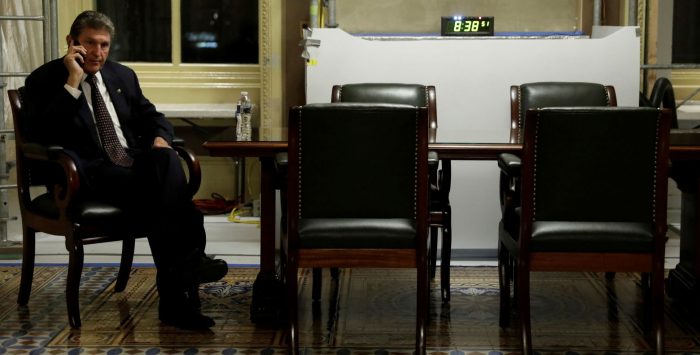 The New York Times has an astonishing story about the extent to which Joe Manchin – Democratic Senator in West Virginia – is campaigning on healthcare above all else.

It’s astonishing not because, in a state where Trump’s approval rating is over 60 percent, defense of the ACA appears to be working for Manchin – he has a 7- to 10-percent polling lead over Republican challenger Patrick Morrisey. Nor because Manchin dare not speak the words “Obamacare” or “Affordable Care Act” – long since terms of opprobrium in the state.

It’s astonishing because debate over protection for people with pre-existing conditions has become a proxy war for what matters most on the healthcare front in West Virginia (and other poor red states): the ACA Medicaid expansion.

has relentlessly raised the alarm over the potential loss of coverage for people with pre-existing conditions, about one in three West Virginians.

Mr. Morrisey, the state attorney general, practically handed him the issue by joining a new lawsuit seeking to repeal the health care law, which Mr. Morrisey calls “devastating” because of rising premiums in the individual market.

It’s true that the Trump administration, declining to defend the ACA against this suit, has asked the courts to strike down the ACA provisions guaranteeing access in the individual market on equal terms to people with pre-existing conditions while leaving the rest of the law intact. But the suit itself, which Morrisey is party to, seeks to have the entire ACA repealed. That would include the Medicaid expansion – and that’s what would hurt West Virginians most, by a long shot.

Since the ACA went into effect in January 2013, West Virginia has cut its uninsured rate from 14.2 percent to 8.8 percent. That’s huge in a state that has the third lowest median household income in the nation – and the highest percentage of residents with pre-existing conditions that would have barred them from obtaining health insurance in the pre-ACA market. According to the Kaiser Family Foundation, that’s the case for 36 percent of West Virginians, compared to 27 percent of all Americans.

How has the ACA helped these poor and often sick West Virginians? Chiefly via the ACA Medicaid expansion, through which the federal government undertook in perpetuity to pay 90 percent of the premium for adults with incomes with incomes up to 138 percent of the federal poverty level who were not previously eligible. Since the law went into effect, Medicaid enrollment in the state has increased by 189,000. That’s almost five times as many people as are enrolled in the private individual market (39,000). Of those, about 22,500 receive ACA subsidy premiums. Somewhere between 14,000 and perhaps 22,000 of those enrollees might have had their access to coverage impaired or denied because of pre-existing conditions in the pre-ACA market.

Moreover, West Virginia is ground zero in the national opioid addiction crisis – and Medicaid is on the front lines in treatment of that crisis, covering almost 40 percent of addicted adults nationally, according to Kaiser.

What’s true in West Virginia is true in all of the poor southern states that have embraced the ACA Medicaid expansion. All of them have cut their uninsured rates by nearly half , half, or more than half, overwhelmingly through Medicaid enrollment.

Impact of Medicaid in low-income states

A lot of West Virginians apparently don’t know how they got insured. Gabriel reports:

In fact, West Virginians covered under the Medicaid expansion don’t always believe they are benefiting from the law. They simply know they became eligible for a “medical card” entitling them to government benefits, which many neighbors and family members already had under more restricted programs.

Morrisey is not going to disabuse them:

Mr. Morrisey accuses his opponent of engaging in “scare tactics.” He says he supports protecting people from losing coverage because of pre-existing conditions. “But to say you shouldn’t knock out a law that’s been utterly devastating West Virginia families with double-digit premium increases is ridiculous,” he recently said on West Virginia talk radio.

Morrisey is pursuing complete ACA repeal – which, again, would affect most of the 189,000 thousand West Virginians who gained Medicaid coverage via the ACA. Were he to personally guarantee issue to everyone enrolled in the state’s individual market, the suit he is party to would still double the uninsurance rate.

For Manchin, however, the word “Medicaid” may be almost as toxic as “Obamacare.” Mina Schultz, a professional ACA enrollment assister who worked in West Virginia, recalls:

While signing folks up for insurance in WV they’d stop me half way though the app to ask, “Wait a minute, is this Obamacare?!” I had people with diabetes and cancer walk out without insurance rather than take expanded Medicaid.

What does work is to talk about pre-existing conditions – politically the red-hot tip of the healthcare spear. According to recent Kaiser Family Foundation polling, 72 to 75 percent of Americans say it’s“very important” to preserve the ACA’s core protections for people with pre-existing conditions. That’s got Manchin fired up: 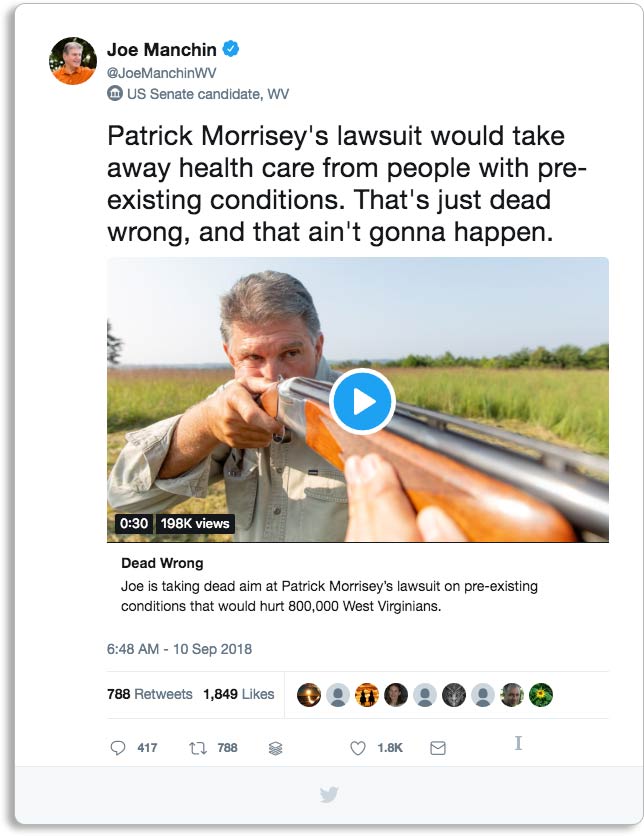 In some red states, Democrats are inhibited from straight talk about the ACA because they literally can’t speak the law’s name, or the names of its component parts. That’s how thoroughly Republicans have gaslighted Americans on healthcare.

I don’t mean to suggest that the ACA’s protections for people with preexisting conditions in the individual market aren’t vitally important. While working-age Americans depend primarily on their employers for health insurers, anyone below Medicare age (who doesn’t qualify for Medicaid or disability Medicare) can be thrown into the individual market at any time. Guaranteed access to affordable, comprehensive insurance in that market (or in a public program that may replace it), regardless of current health or health history, is therefore an essential benefit for all of us.

But in our distorted political combat, “pre-existing conditions” is standing in for “access to affordable health insurance.” The real crux of the Republican assault on the ACA last year, in the repeal bill that passed the House, was defunding support for the poor and near-poor: rolling back the Medicaid expansion, slow-strangling funding for traditional Medicaid, stripping Cost Sharing Reduction out of the individual market and so leaving low income enrollees with $11,000 deductibles. Allowing states to reintroduce medical underwriting was a dollop of gratuitous cruelty added late to appease the Freedom Caucus. But then as now, the move to undermine guaranteed issue touched a nerve nationally and threw the wanton fraudulent cruelty of the whole enterprise into sharp relief.