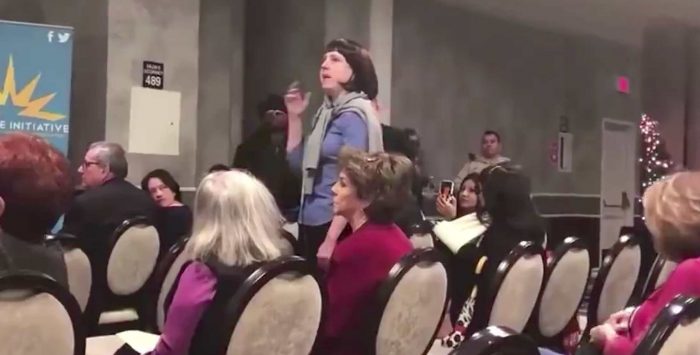 Laura Packard was asked to leave a 2017 town hall featuring Sen. Dean Heller after she questioned his vote to eliminate the ACA's individual mandate. | Youtube screenshot

Two years ago today, House Republicans passed their bill (called AHCA) to gut the Affordable Care Act, and then held a kegger to celebrate.

I remember it pretty clearly. Because this happened the day after my first chemotherapy treatment.

I have stage 4 Hodgkin's lymphoma. 1st chemo today. Obamacare is literally keeping me alive & can get me cured. If it survives. #SavetheACA

I walked into a doctor’s office in April of 2017 as a healthy 40-year-old with a nagging cough. And walked out with a stage 4 cancer diagnosis. My entire life changed that fast.

While I went through six months of grueling chemotherapy and then a month of radiation treatments, I had to fight Republicans in the House and Senate every step of the way. I’m self-employed – my market-rate insurance policy is on the individual marketplace through the Affordable Care Act. There is no Plan B for me.

Before the ACA, I remember I used to have junk insurance. If I still had that insurance, today I would be bankrupt or dead.

So I kept fighting. We wrote letters, we called and called, we protested, and still they moved forward with multiple attempts to take away our health care. Heck, President Trump even blocked me on Twitter, but we did not stop fighting.

President Trump blocked a woman with stage 4 cancer on Twitter.

My Senator at the time, Senator Dean Heller, didn’t listen to us. I was even thrown out of his event for daring to ask him about his health care record.

.@SenDeanHeller now throws out a stage 4 cancer patient for demanding answers. This is disgusting. #GOPTaxScam pic.twitter.com/tZa9HMOoCA

But Senator Heller is no longer a Senator today. In fact, many of the elected officials that turned on their own constituents rather than defending their records are no longer in office.

The cruelty of the AHCA

The various Republican health care bills were nothing short of cruel, and everyone that voted for them should be ashamed of themselves.

The AHCA bill in the House vowed to give tax cuts to millionaires, billionaires, and wealthy corporations while cutting $834 billion from Medicaid, followed by $276 billion in cutbacks for subsidies for individual health insurance. It would have cut 1.8 million jobs by 2022. It would have raised the uninsured rate by 23 million Americans by 2026 – including a 50 percent increase of the uninsured rate among children.

When the 217 House Republicans passed their bill, they showed the American people that their priorities were with wealthy donors – not our access to necessary and lifesaving health care.

Even though the next GOP health care bill eventually failed in the Senate by 1 vote (thank you Senator McCain), they are still obsessed with Obamacare. Not one week ago, President Trump spoke at a National Rifle Association conference in Indianapolis, talking about their success in removing the individual mandate and added “Now we’re going for the rest.” A few days ago the Trump Administration attacked the ACA in federal court, dealing us another blow in their attempt to destroy the health care millions of people rely on to survive.

Earlier this year, I moved to Colorado because, thanks to reckless Republicans and their anti-ACA court case, I had to ensure I lived in a place with protections on a state level for people like me. I’m lucky to have the freedom to be able to move for my health, most people don’t have that flexibility and shouldn’t have to have that flexibility just to stay alive and well.

I am not alone in facing this choice. There are approximately 130 million Americans who live with pre-existing conditions and nearly 2.4 million Coloradans. We deserve to have lawmakers who will fight to protect our care, rather than showering their billionaire buddies with more tax breaks.

My new Senator Cory Gardner has voted many times to repeal the Affordable Care Act, leaving people with pre-existing conditions like me out in the cold. He voted four times for repeal in the Senate, plus another 3 votes for total repeal in the House. He can’t whitewash away his votes, any more than those of us with pre-existing conditions can whitewash away our own medical history.

As we mark the two year anniversary of the first failed Republican Health Care Repeal Bill, we can’t forget how Republicans like Senator Gardner continue to put our access to health care on the line.

I see my oncologist every six months to make sure I stay in remission, cancer is not something I am ever allowed to forget. Every doctor’s visit is a reminder of how delicate our own bodies can be, and how vulnerable we can be to the system when we need medical care. Our elected officials must fight to make health care more available and affordable to all. On this anniversary, listen to their words but remember their votes. And when we march to the polls next year, vote accordingly.

Laura Packard is a stage 4 cancer survivor, national co-chair of Health Care Voter, and founder of Voices of Health Care, a non-profit focused on organizing adults with serious medical conditions. She is a small business owner in Denver.

2015: Gardner Voted To Repeal Most Of The ACA. Gardner voted for legislation that gutted the Affordable Care Act by eliminating the insurance exchanges and subsidies, and repealing the Medicaid expansion accepted by 30 states, including Colorado. [HR 3762, Roll Call Vote #114, 12/3/15]

2017: Gardner Voted For The Senate “Repeal And Delay” Plan. Gardner voted for Obamacare Repeal and Replacement Act was a Republican effort to repeal the ACA without a replacement. Known as “repeal and delay,” the bill repealed major sections of the ACA, including the Medicaid expansion and premium tax credits, in 2020. [HR 1628, Roll Call Vote #169, 7/26/17]

2011: Gardner Voted For A Total Repeal Of The ACA. Gardner voted for The “Health Care and Education Reconciliation Act” would have repealed all of the Affordable Care Act. [HR 2, Roll Call Vote #14, 1/19/11]

2013: Gardner Voted For A Total Repeal Of The ACA. Gardner voted for HR 45, an act “to repeal the Patient Protection and Affordable Care Act and health care-related provisions in the Health Care and Education Reconciliation Act of 2010.” [HR 45, Roll Call Vote #154, 5/16/13]