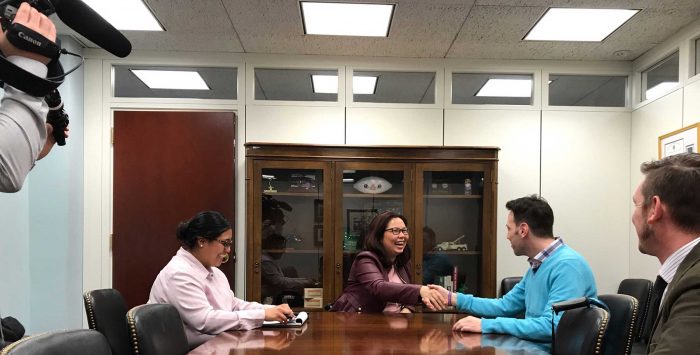 Healthcare advocate Peter Morley talks with Senator Tammy Duckworth during one of the more than 275 meetings he's held with members of Congress.

EDITOR’S NOTE: On February 6, 2019, Peter Morley testified before a U.S. House of Representatives Subcommittee oversight hearing titled “Impact of the Administration’s Policies Affecting the Affordable Care Act.” Peter’s testimony – about the “critical importance of the Affordable Care Act and the Trump Administration’s ongoing efforts to undermine it” – is one of more than 275 meetings he’s held with legislators in Washington, DC, as a passionate advocate for healthcare that is accessible and affordable to people with Lupus and other chronic illnesses.

We’ve asked Peter to share an abbreviated, edited version of his testimony with our readers.

My introduction to pre-existing conditions

In 1997, I sustained an injury during a period of time when my insurance coverage had lapsed. I ended up paying the costs of my physical therapy, epidural steroid injections, and medications out of my own pocket. Worse, when I needed surgery a couple of years later, my injury was considered a pre-existing condition and all my claims were denied for the procedure – despite the fact that I’d secured health insurance through my new employer.

The bills from that surgery were an incredible financial burden for years, totaling tens of thousands of dollars. It was my first introduction to the broken United States healthcare system and my real first harrowing encounter with the obstacle called pre-existing conditions. But it was just the beginning.

In 2007, I was permanently disabled – and rendered unable to work – after I fell from a ladder. (I was fortunate to be spared the entire cost of my medical bills because at that time, I had continuous insurance coverage. Since then, I have had 10 surgeries in 11 years, including four spinal surgeries. Three were failed spinal fusions; the last one caused irreversible nerve damage.)

Four years later, I was diagnosed with kidney cancer and lost part of my right kidney, but fought my way into remission in 2016. Since then, I have had two neurosurgeries for benign pituitary tumors, two carpal tunnel surgeries and one surgery to remove a malignant melanoma.

In addition, I have had diagnoses over the last 11 years that would put me in a veritable Pre-existing Conditions Hall of Fame, with conditions including, but not limited, to:

As though that weren’t enough, in 2013, I was diagnosed with what has become my primary health concern to-date: Lupus. This autoimmune disease creates autoantibodies that not only attack an invading infection, but also turn and continue to destroy healthy cells and organs, thus causing inflammation known as a Lupus flare. Having this disease means I must be checked frequently by my rheumatologist.

I fight fatigue of #Lupus every day to get out of bed.

I'm fighting for my life & YOURS. Fight with me.?pic.twitter.com/v6DccSHVrs

Lupus has a multitude of side effects, but for me, the most challenging is the chronic fatigue that I fight every day. It is a struggle and challenge to get out of bed every single day. I take 25 different medications daily, 38 yearly, and receive 12 life-saving infusions yearly for my Lupus.

Without access to insurance, I could not afford to pay for these medications and would lose access to my team of doctors. As a result, my disease would progress, and I could die.

Despite all my health challenges, I have flourished by the continuity of care provided to me by the 17 doctors I see on a monthly, quarterly, semi-annual and annual basis. Depending on the week, I spend about 60 to 70 percent of my waking moments in doctors’ offices. And as someone who has faced my own mortality on more than one occasion, I am grateful to be here. I know first-hand how essential it is to protect our care. I also realize that due to my advancing diagnoses I am thankful and appreciative for every day.

From private citizen to public advocate

I want you to know that I was a very private person prior to the 2016 election, but once President Trump was elected, I realized I could no longer keep quiet. I had to – in good conscience – do something to promote healthcare advocacy and empowerment. I recognized that meant I had to share the very personal details of my own story on social media. There are people in my life that were not aware I had kidney cancer or Lupus and have found out through Twitter. That’s how guarded I had been.

But listening to President Trump’s campaign rhetoric for 18 months caused me incredible stress and motivated me to speak my truth.

Before the Affordable Care Act guaranteed health insurance coverage to those with pre-existing conditions, many people like myself with Lupus and my multitude of diagnoses could be denied health insurance policies by many providers.

The ACA defined what benefits insurers would be required to include in order to enroll consumers in health insurance products (including Medicare and Medicaid). Before the ACA was passed, each insurance company had different restrictions as to what services its policies would cover, at what premium cost, and from what providers. Someone at each company would review each claim and decide what to pay.

I think we can all agree that the ACA is not perfect and could greatly benefit from being enhanced. We need to return to the intent to cover 10 essential health benefits. And most importantly improve accessibility and affordability for everyone by lowering premiums, deductibles and drug costs.

In the last two years, I have traveled to DC 16 times to advocate not only for myself, but for thousands of people who have reached out to me through Twitter and my website, morethanmySLE.com.

My first trip to DC

I was inspired to make my first trip to Washington, D.C., on July 27, 2017 – the day of the Vote-a-Rama in the U.S. Senate for the “Skinny Repeal” of the ACA. I had made the trip by Amtrak to DC because I felt helpless sitting at home waiting for the outcome – which seemed likely to be that the ACA was doomed.

That day, I walked in and out of every Senate office I could and spoke with anyone who would listen – Democrat and Republican alike. The very last office I visited was Senator McCain’s office at around 5:15 p.m. Though he wasn’t at his office, I spoke with his Legislative Assistant and shared the story of my healthcare fight. When I told her I had Lupus, she burst into tears.

“I’m sorry,” she said. “My best friend worked here in D.C. and she suffers from Lupus as well and had to move to a climate more conducive to her Lupus. And you sharing your story just reminds me of her and her struggle.”

I had seen some emotional responses that day, but not one like this. I offered the aide information about a hotline that could help her friend get access to care and therapy wherever she was. And, before I left, I begged her to ask Senator McCain to reconsider and vote ‘no,’ explaining to her that were so many people who would suffer.

At the end of the day, I headed home, buoyed by my mission, and feeling I had done all I could. I woke up in the morning and somehow managed to get out of bed with my body ravaged by the energy I expended and the chronic fatigue from my Lupus had been triggered. I fully expected to turn on the TV and learn that the ACA had been repealed. Instead, I saw an image of John McCain giving the vote a thumb’s down and I couldn’t believe what I was looking at.

People began sharing their stories with me and asking me to represent them in D.C. I have made 15 trips to DC since July 2017. I’ve met with Representatives and Senators’ staffs from both parties to share these healthcare journeys because healthcare is a bipartisan issue.

People have told me because of all these healthcare repeal and sabotage efforts, that they feel alone, scared, and afraid, when they should be focusing their energy on their own well-being. The truth is, we all know someone who has been helped by the ACA.

I know firsthand that your health can change in an instant. That is why I fight for my life for those who will be left vulnerable if they lose their healthcare. I will continue to use my voice and encourage people to call their state and federal policy makers, because being proactive is empowering. No one should ever have to worry about having their healthcare taken away from them, simply because they became ill!

I lay awake at night worried about the more than 130 million Americans with pre-existing conditions who would lose their protections if the ACA is declared unconstitutional. Losing access to healthcare means different things to everyone. For me, it would mean not affording prescriptions, and infusions that are keeping me alive.

Due to the chronic fatigue that Lupus causes and my other diagnoses, I realize that I put my own health at great risk to travel and share these stories with members of Congress. I frequently schedule mass meetings because I never know if my visit will be the last time that I’m healthy enough to travel to DC.

But having the opportunity to speak to legislators where there might be one who will listen to me and could change their mind, is the reason I keep coming back. It energizes me and has given me a new sense of purpose in my life.

Peter Morley is a disabled patient advocate, a two-time cancer survivor and a healthcare activist who lives with chronic illness. He has held over 200 meetings in Congress sharing his own journey and the health care stories of people across the United States.