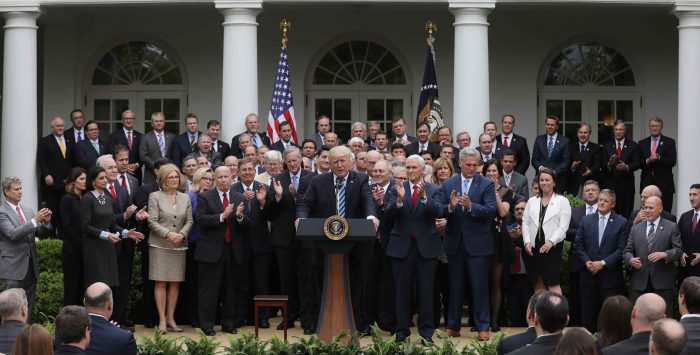 President Trump and House Republicans celebrate House passage of a bill to repeal major parts of the ACA in 2017. (Many of these legislators exited Congress in the 2018 mid-terms, an election that was largely about healthcare.) | REUTERS/Carlos Barria

Since last night, my Twitter feed has been blowing up with people freaking out over the latest attack on justice, the rule of law and decency coming out of the Trump Administration.

Trump’s Department of Justice sent a brief to the 5th Federal Circuit Court stating that they’ve “changed their minds” about their position in the insane “Texas vs. Azar” lawsuit, and now agree with the plaintiffs in the case that the entire Patient Protection and Affordable Care Act should be ruled unconstitutional and repealed.

Before I get into the latest insanity, a quick review:

The case was originally brought by 20 Republican Attorneys General and Governors in February of last year, and the entire case is the height of chutzpah. It goes like this:

That’s it. That’s literally their argument: “We partly sabotaged the law, therefore we get to sabotage all of it.”

The case has no legal merit

The legal merits of the case are nonexistent. That’s not just me saying that; virtually every legal and Constitutional expert across the political spectrum agrees. Even Case Western Reserve University law professor Jonathan Adler, one of the chief architects of the infamous King vs. Burwell lawsuit (which until now held the crown for the most absurd anti-ACA case to ever make it to the Supreme Court) wrote an article at Reason stating point blank that the legal argument is “brazen and audacious,” and that there is “no basis whatsoever for the states’ argument or Justice Department’s concession on severability.”

Frivolous or otherwise meritless lawsuits are filed all the time, but here’s where things became truly dangerous: Last June, the Trump Administration’s Department of Justice – whose job specifically includes defending federal laws whether they like those laws or not – deliberately threw the fight, announcing that they had no intention of defending the ACA. In fact, they went even further, announcing that they agreed with the plaintiffs for the most part.

As both Adler and University of Michigan law professor Nicholas Bagley noted, this represented a complete dereliction of duty on the part of the Justice Department. Even worse, it basically means the Trump Administration can’t be counted on to defend or enforce any law they don’t want to.

None of this stopped right-wing Judge Reed O’Connor from ruling in favor of the plaintiffs on December 14th (just ahead of the busiest day of the ACA Open Enrollment Period). He did indeed rule the entire ACA unconstitutional, but also stayed his decision pending the appeals process, which is where things stand today.

The next phase is for the case to be heard by the 5th Circuit Court of Appeals, which is expected to happen this July. Regardless of how they rule, the case will then be appealed to the Supreme Court by whoever loses. The Supreme Court will then either hear the case or refuse to do so.

Last June, when then-Attorney General Jeff Sessions decided to throw the fight, he partially hedged: He agreed with the plaintiffs that the ACA was unconstitutional, but disagreed with what the final ruling should be. While the plaintiffs wanted the entire law repealed, the DOJ asked that “only” the pre-existing condition protections be thrown out.

Yes, that’s right: The very same pre-existing condition protections which became the lynchpin of the entire Republican “repeal-and-replace” fiasco in 2017 … and then got their asses kicked over in the 2018 midterms, all while desperately by insisting that “no, really … we want to protect those with pre-existing conditions! Seriously, guys!”

Needless to say, the “lie-through-your-teeth” strategy failed for the most part, although there were exceptions like Missouri Attorney General Josh Hawley, who was one of the plaintiffs in the case and still managed to win his U.S. Senate race by running ads claiming he wanted to protect coverage of pre-existing conditions. Some people are … easily fooled, let’s just put it that way.

Then, of course, there was this:

Republicans will totally protect people with Pre-Existing Conditions, Democrats will not! Vote Republican.

I’ll be honest: I never quite understood Sessions’ thinking last June. Repealing ACA pre-existing condition protection requirements like guaranteed issue, community rating and essential health benefits would effectively destroy the ACA exchanges (as Trump insisted he was going to do) even if the other provisions stayed in place.

There’d be no way of calculating the financial subsidies, for instance, since the ACA formula bases those subsidies on the “benchmark Silver plan”… except the benchmark plans are priced on the assumption that everyone of the same age in the same location is priced identically. Once carriers go back to medical underwriting, everyone’s premium would be priced differently … and once the benefits included start being scattered all over the place, there’s no longer any consistent Actuarial Value for the plans anyway.

The only reason I can think for Sessions to take this stance is political: He may have noticed that besides the threat to pre-existing conditions from the 2017 repeal-and-replace debacle, the other issue which really caught people’s attention was the threat to Medicaid coverage. Perhaps he thought that the GOP could survive the midterms if they destroyed the private exchanges but not Medicaid expansion as well.

The veil has been lifted

In any event, even that last, minuscule fig leaf of having the slightest bit of compassion or thought for the health or well-being of Americans was torn off last night. As Bagley put it:

The Trump Administration Now Thinks the Entire ACA Should Fall

In a stunning, two-sentence letter submitted to the Fifth Circuit today, the Justice Department announced that it now thinks the entire Affordable Care Act should be enjoined. That’s an even more extreme position than the one it advanced at the district court in Texas v. Azar, when it argued that the court should “only” zero out the protections for people with preexisting conditions.

… Even apart from that, the sheer reckless irresponsibility is hard to overstate. The notion that you could gut the entire ACA and not wreak havoc on the lives of millions of people is insane. The Act is now part of the plumbing of the health-care system. Which means the Trump administration has now committed itself to a legal position that would inflict untold damage on the American public.

And for what? Every reputable commentator — on both the left and the right — thinks that Judge O’Connor’s decision invalidating the entire ACA is a joke. To my knowledge, not one has defended it. This is not a “reasonable minds can differ” sort of case. It is insanity in print.

How the GOP is reacting

The reactions from various Republican officials so far is pretty telling:

Steve Stivers, NRCC chair until recently, won’t comment on DOJ calling for ACA to be struck down, says he hasn’t seen it

Kevin McCarthy says to call his office for comment on the ACA case. Won’t comment at his press conference

… and so on. They can’t think of any coherent response, because, again, repealing the entire ACA – which would include killing off protections for those with pre-existing conditions, Medicaid expansion and so forth – is exactly what they’ve been trying to do for the past nine years. Since they can’t come right out and say that they agree with eliminating all of that, they can’t say much of anything.

My guess is that they’ll eventually go right back to gaslighting again in a few days, but the jig is up (and has been since the moment they passed the American Health Care Act back in May 2017).

A true train wreck for consumers …

As for what would happen if the ACA is eventually repealed (remember, the 5th Circuit won’t hear the case until July, and I’d imagine an appeal to SCOTUS could take as long as another six months after that?), here’s a quick reminder:

* (depending on how you define “pre-existing conditions)

… but also for the entire healthcare system

…and that’s just for starters. After nine years, the Affordable Care Act has embedded itself into every facet of the American healthcare system. Even if everyone wanted to simply turn back the clock to 2009 (and God knows I don’t), it’s not something which could be done at the drop of a hat. It took nearly four years from the time the ACA was signed into law in March 2010 until the major ACA provisions went into effect, and with good reason.

The entire healthcare industry had to completely retool its billing practices, legal filings, actuarial tables, service contracts, marketing tactics and market position strategies to comply with the new law. Tearing all of that down – again, doing so with nothing whatsoever in place to pick up the pieces – would be a disaster of epic proportions. Utter chaos.

And utter chaos, of course, is exactly what Donald Trump – and, by their enabling and active assistance, the entire Republican Party – lives for.