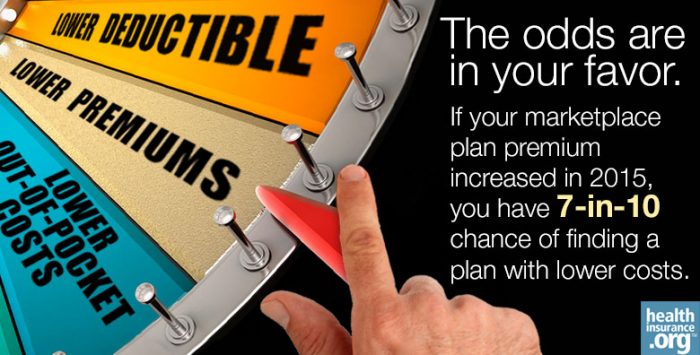 What if I told you that I had a way you could win $700 without putting any of your money at risk, and it would pay off 70 percent of the time. Would you play? Imagine walking into a Las Vegas casino, sitting down to a game of cards, and without risking any money of your own, walking away with $700. All you had to do was spend an hour of your time. Not a bad bet!

Ladies and gentlemen, the game is not blackjack, the game is the federal health insurance marketplace, and if your premium went up for 2015, you have a 70 percent chance of winning, just by spending an hour of your time shopping online for a better plan.

Stay with me; I’m going to tell you how to do it.

For many people, December 15th may have quietly come and gone amidst a flurry of holiday preparations and end-of-the-year tasks, but it was actually a very big day. If you were enrolled in a marketplace Obamacare plan for 2014 and you had not yet chosen your plan for the coming year, on December 15th you were passively auto-renewed into the same plan for 2015 (or a similar plan if your plan was discontinued).

I’ve got good news and bad news for the auto-renewers who did not actively shop their state exchange or the federal marketplace for a health plan for the coming year. The good news is that auto-renewal is administratively straight-forward. It ensures that you will be enrolled in a qualified health plan and helps you avoid accidentally incurring a tax penalty because you simply forgot to renew your health insurance for 2015.

Luck be a lady

Fortunately, you still have time to actively enroll in your 2015 health plan; open enrollment does not close until February 15th. Even better, a recent analysis by HealthCare.com suggests that the odds are stacked in your favor. In this study, HealthCare.com shopped every plan on the federal health insurance marketplace that increased in premium and attempted to find cheaper alternatives.

Here’s what they found:

In essence, if your plan increased in premium from 2014 to 2015, you have a 70 percent chance of winning (finding a better alternative) and you have almost five chances to win what could amount to $700.

Active enrollment: You have to play to win.

Technology is making it easier than ever for you, the consumer, to search for and compare health insurance plans. Take advantage of it in the same way you take advantage of technology to shop for airline tickets or a new car. Visit a few of the online search and comparison websites and review your options.

Commit to spending an hour to making this important decision that can save you hundreds, or even thousands of dollars, and protect you and your family in the event that you should need medical care. The odds are in your favor, but as they say, “You have to play to win.”

* We use the term “plan offering” to indicate the availability of a particular health plan within a given geographic area. Said another way, a single plan might be available in three geographic regions and would constitute three plan offerings in this analysis.

April Seifert is an expert in the field of data analysis for the healthcare industry and has spent her career using measurement and analytics to inform decision-making from the payer, consumer, provider, and employer perspectives.