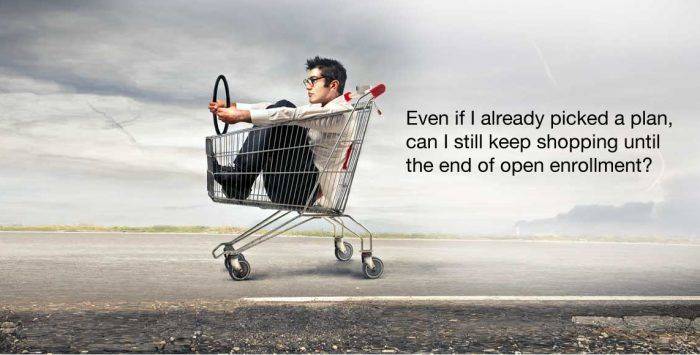 Q. If I already enrolled in a plan for the new year, can I change my mind and pick a different plan instead?

An executive order signed by President Biden has authorized a COVID-related special enrollment period on HealthCare.gov. The SEP will run from February 15 to August 15.

A. You can always make multiple health insurance plan selections during open enrollment, as long as you complete the final plan change by the end of open enrollment. For 2021 coverage, open enrollment ended on  December 15, 2020 in most states, although it extended into January in some states.

After open enrollment ends, you can normally only make changes to your coverage if you experience a qualifying event. But there’s a COVID-related enrollment period in 2021, which continues through August 15, 2021 in most states. During this window, a qualifying event is not necessary. Uninsured residents can enroll in coverage, and it’s also an opportunity for current enrollees to switch to a different plan in order to take advantage of the enhanced premium subsidies created by the American Rescue Plan.

Plans that terminate at year-end

But your special enrollment period triggered by loss of coverage also extends for the first 60 days of the new year (albeit with a gap in coverage if you enroll on January 1 or later and were not auto-enrolled into a replacement plan by the exchange). So if your plan terminates on December 31, you have the first 60 days of the new year to select a plan other than the one the exchange picked for you (note that HealthCare.gov allows this option, but if you’re enrolled in a plan through a state-run exchange that maps people in this situation to new coverage, you may or may not have a special enrollment period at the start of the new year).

As noted above, if you enrolled in a plan early in open enrollment and then changed your mind before open enrollment ended, you could log back into your exchange account and pick a different plan (this option is available even after the start of the new year, in state-run exchanges that offer extended enrollment periods that continue into January). In that case, the new plan would then take effect in February — or March, depending on the date you enroll — and replace the plan that had taken effect in January. If you need help or have questions about this, you can contact the exchange and follow its instructions for making a plan change. Make a note of who helped you, and get an incident number to keep track of the steps you’ve taken.

If your premiums are automatically drafted from your bank account and you’re switching to a different plan, you can request a change to paper billing; in most cases, this can be done directly through the carrier. Then, if there’s a delay in processing your cancellation request, you won’t be inadvertently paying for two plans at the same time.

Make sure you pay any premiums due on the current plan to cover you until the new plan takes effect, so you don’t end up with gaps in coverage.

After the end of open enrollment in your state, you won’t be able to make a plan change for the rest of the year unless you have a qualifying event (but again, the rules are different in 2021, as a result of the ongoing COVID pandemic and the need to give people an opportunity to take advantage of the American Rescue Plan’s enhancement to the ACA’s premium subsidies).