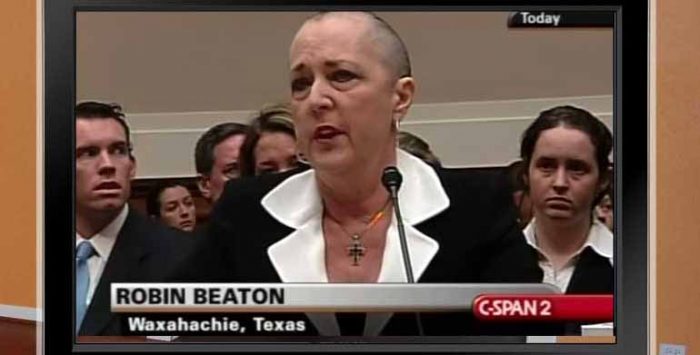 Robin Beaton, a retired nurse in her 50s, was diagnosed with breast cancer in June 2008. Then – just when she needed her health insurance most – it abandoned her.

Beaton, who signed up for an individual health insurance policy when she started a small business, had never missed a payment. Still, her carrier rescinded her policy after her diagnosis – not for reasons related to the cancer, but instead for two unrelated pre-existing conditions: acne and a rapid heart beat.

The Texas woman’s  struggle to regain her coverage – and get life-saving surgery – put her in the national spotlight as glaring evidence of how the insurance industry’s practice of rescission can be deadly. Her testimony before Congress and President Obama’s reference to her case helped draw attention to the thousands of similar cases each year.

Such practices have gone on unimpeded because until 2010, insurance companies were free to retroactively cancel (rescind) policies – often when policy holders needed care – because the policy holder, their employers, or practitioners had made an unintentional mistake on their paperwork.

Nancy Ennis-Davenport, CEO of the Patient Advocate Foundation, says her organization represented 82,963 patients in 2010. Of that number, nearly a third looked to PAF for help because they were denied insurance benefits, often finding themselves at the mercy of insurers when they suddenly needed costly care.

Davenport-Ennis says her clients have routinely had the carpet pulled out from under them for a variety of reasons: misstatements of their weight, an incorrect medical code, omission of a possible condition never discussed with them, or for not carrying COBRA when there was no reason for the extended coverage.

Fortunately, those who sought help through PAF typically find success. “In 94 percent of cases, we are able to get their claim covered or their policy reinstated within plain language of the contract,” says Davenport-Ennis, “meaning clients were denied on grounds that were not correct.”

Once PAF brings a challenge to insurers’ medical directors – or moves to a peer-to-peer review process – a denial of coverage or rescission is usually turned around in anywhere from six days to just over a month. “We are able to resolve by approaching the situation as a contract issue, sticking to the actual wording,” says Davenport.

Controversial industry practices that result in policy cancellations may soon come to an end. Under new regulations laid out in the Affordable Care Act (ACA), insurers are prohibited from rescinding coverage for individuals or groups – except in clear-cut cases of fraud.

New health plans beginning on or after September 23, 2010 are now required to provide detailed information to a policyholder about the grounds for a denied claim or rescinded coverage. The plans must also notify consumers about their right to appeal the plan’s decisions and instruct them how to appeal.

If, after a “full and fair review” of the denial or rescission, the carrier upholds its decision, the plan must allow the policyholder an external appeal to an independent reviewer not employed by the health plan. The external review process stands to provide the most effective recourse for consumers under new rules that will standardize the appeals process for all states.

To date, states have been free to design external review boards as they choose, but that has left them open to the criticism of reform advocates who argue the boards need to be completely independent of the insurance companies for fair play.

The long-term effectiveness of the reform remains to be seen, but already, there are signs that the practice of rescission has been slowed.  The PAF reports that only a small number of rescission cases have come through its doors since the legislation took effect in September 2010.

For now, Ennis-Davenport advises clients who believe they’ve been wrongly denied coverage or had their policy rescinded to get a copy of their full insurance contract. It helps to also have the denial in writing, spelling out the grounds for the carrier’s decision in clear language.

“Insisting the insurance company put everything in front of us in writing is how we as an organization have resolved problems resulting from blatantly unfair decisions,” Ennis-Davenport says. “When we say turn to page 16, paragraph b, line 7, the company understands we understand their business and language.”

Consumers who feel they have wrongfully had a claim denied or policy canceled, can contact the Patient Advocate Foundation at (800) 532-5274 or through the PAF web site.