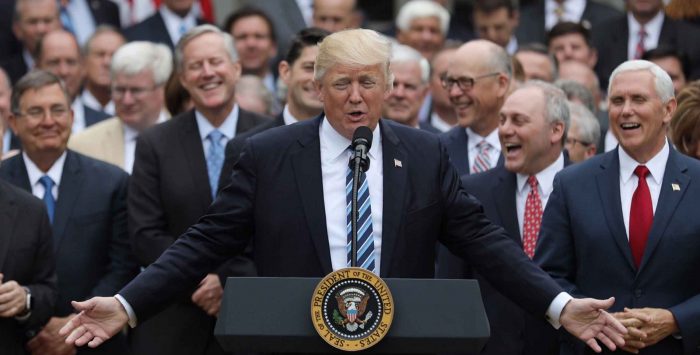 As a practicing physician for going on nearly 50 years now, I often feel like that auto insurance company that says “We know a thing or two because we have seen a thing or two.”

After years of dealing with people who are insured, people who are uninsured and health insurance companies, I know that having real, comprehensive coverage can mean the difference between life and death.

A few years back, one Republican Congressman – speaking about the impact of GOP legislation that would have drastically cut Medicaid – defended the plan he supported by stating, “Nobody dies because they don’t have access to health care.”

That false assurance has been widely debunked by people who actually report on health reform or work in healthcare. But that hasn’t stopped critics of the Affordable Care Act from continuing to promise “Relax. We’ve got this” … all the while promising to dismantle a law that greatly expanded access to affordable health coverage for millions.

Pre-existing conditions are a matter of life and death …

The folks who wrote the ACA bent over backward to ensure that protections for millions would be a central plank of the law:

Under current law, health insurance companies can’t refuse to cover you or charge you more just because you have a “pre-existing condition” — that is, a health problem you had before the date that new health coverage starts.

… for millions of Americans.

In 2017, about half of non-elderly Americans – or about 130 million non-elderly people – had pre-existing conditions in the U.S., according to a brief from the U.S. Department of Health and Human Services.

More and more people are beginning to understand that. Of American voters, 66 percent of registered voters said that continued protections for people with pre-existing conditions was either the “single most important factor” (14 percent) or a “very important factor” (52 percent) in their vote for a candidate. (Which explains why the GOP is suddenly claiming they love these protections.)

Who are these people with pre-existing conditions?

If you don’t have a pre-existing condition – or you can’t think of someone right off the top of your head who might have one – let me offer a glance at some of your fellow Americans whose stories as patients have crossed my desk over my years as a Physician Executive.

This middle-aged female was sent to the Emergency Department by her cardiologist because of symptoms that  included a five-day history of palpitations (feeling heart beat in chest), dizziness (imbalance) and headache. The EKG showed Atrial Fibrillation with a rapid ventricular response. She also had an elevated blood pressure that was persistent. The admitting diagnosis was new onset atrial fibrillation with rapid ventricular response.

Result: This patient now has developed the dreaded “pre-existing condition.”

This 30-something male patient had a 12-year history of a herniated disc. He presented to the Emergency Department with back pain and sciatica going into his left leg, associated with difficulty walking. A CT scan indicated a disc protrusion in the lower back.

This patient had a medical history of a weightlifting injury and known herniated disc. On top of that he presented with a two-week history of gradually increasing low back pain with sciatica. The pain was impacting his ability to walk. An MRI revealed the thecal sac at the nerve root was indented. In layman’s terms, that means the arthritis of the spine was putting pressure on the nerve.

Result: Patient #2 had a pre-existing condition and could be denied health coverage.

A middle-aged female patient came to the Emergency Department complaining of a pounding headache located mostly in her forehead, associated with lightheadedness. The patient had a medical history of high blood pressure and heart disease but had not taken her blood pressure medication due to financial reasons for at least two months.

The patient also had a history of mild atrial fibrillation and chronic lung disease, but the patient reported that she had not had treatment for those. The patient also reported swelling in her lower extremities for which she took an over-the-counter medication.

Result: This is not an unusual scenario in today’s healthcare landscape. And this patient could be denied coverage for these pre-existing conditions.

While Republicans did their level best in 2017 to pass a law that would erode protections for folks like the three examples above (and many more), President Donald Trump has been providing his own false assurances about about health coverage. His promise: that Americans can relax, because he’s coming to the rescue with more (and CHEAPER) short-term health insurance alternatives.

Short-term coverage is not an ideal solution for people with pre-existing conditions. The plans:

Lack of insurance can kill you.

So let’s go back to the original point of this column: that pre-existing conditions are a matter of life and death. They most definitely are – because having a pre-existing condition in the ‘good old days‘ before Obamacare meant that getting comprehensive health coverage on the individual market was difficult or near impossible.

But can being uninsured really kill you? From my literature review, it’s clear that you are from 3 to 29 percent more likely to die if you don’t have health insurance than those who do!

Here’s some of research:

The Congressman at the start of this column also famously stated that “Nobody wants anybody to die.” It sounds great – and it’s a notion that most of us can probably agree with.

But at this critical juncture in our nation’s healthcare history – when Americans are more concerned than ever about losing the protections they gained from the ACA – we must pay even closer attention.

We must closely examine our candidates’ voting records on healthcare. We must not simply nod our heads at last-minute promises about preserving ACA’s protections. We can’t simply decide that cheap coverage is good coverage.

We should know better. After all, we’ve all “seen a thing or two.”

Brian Casull has been a physician for almost 50 years in service, including 21 years in the United States Army as a Medical Corp Pediatrician and Hospital Commander. In the private sector, he has served as Medical Director for the Rocky Mountain Rehabilitation Center,  Chief of Staff at the Cigna Staff Model,  Medical Director for The Traveler’s Insurance Company,  Los Angeles Medical Director for UnitedHealthcare, and Assistant Vice President for a Pharmacy Benefit Manager PCS in Arizona. He currently operates his own firm – Casull Healthcare Consulting – and has obtained an MPA in Health Care Organizations. He has also authored This Can Kill You: American Healthcare in Transition and is currently working on a second healthcare book.