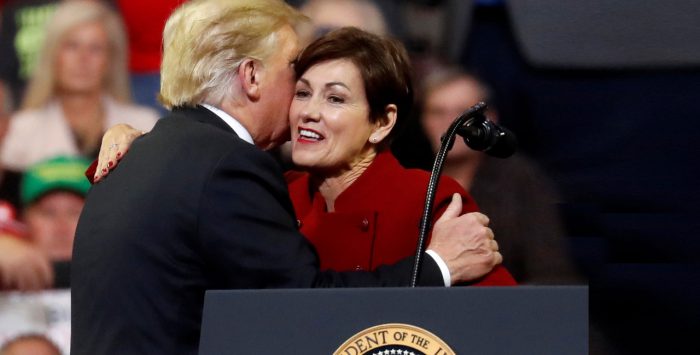 In 2017, Iowa Gov. Kim Reynolds supported a 1332 waiver proposal – ultimately withdrawn – that would have rewritten rules on how federal ACA subsidy money is used in Iowa. | REUTERS/Leah Millis

The Trump administration has opened a new front in its assault on the ACA marketplace’s protections for people with pre-existing conditions and low incomes.

This time the vehicle is the ACA’s Section 1332 innovation waivers, which enable states to propose alternatives to the ACA’s basic marketplace architecture to get their residents covered with affordable, comprehensive insurance.

First, in guidance issued on October 24, the Department of Health and Human Services (HHS) and the Treasury relaxed strict standards that until now states have had to meet to get waiver proposals approved. According to the new guidance, redesigned marketplaces proposed in waivers no longer have to provide coverage as affordable and as comprehensive to as many people as the existing ACA program does. They only have to make equally comprehensive and affordable insurance available to their residents alongside less comprehensive plans.

Then, last week, Center for Medicare and Medicaid Services (CMS) fleshed out this invitation by floating four waiver concepts. One of the four, a reinsurance program that lowers premiums, is non-controversial and has been successfully proposed and implemented by several states. The others are more radical:

The uber-concept here is to encourage states to subsidize health plans that don’t comply with ACA rules – including lightly regulated so-called “short-term, limited duration” plans. This summer, the Trump administration finalized new rules that allow these plans (which are not compliant with the ACA) to be sold for terms up to 364 days, renewable twice. The Republican Congress’s December 2017 repeal of the individual mandate – a tax penalty for not obtaining comprehensive insurance – further juices this “short-term” market. Unlike ACA-compliant plans, these plans

Making these plans available for full-year terms and beyond has cut into the ACA-compliant market. Helping people pay for them could reduce the ACA marketplace to a very expensive high-risk pool.

The ACA does need to be amended to make insurance more affordable for some people who look to the ACA marketplace for insurance – that is, those who don’t have access to employer-sponsored insurance or public programs like Medicaid and Medicare. In particular, those who earn slightly too much to qualify for ACA subsidies – over $48,560 for an individual, or $100,400 for a family of four – often find ACA premiums hard to afford if not unaffordable.

That’s especially true for older enrollees, as the ACA allows insurers to charge up to three times as much for a 64 year-old as for a 21 year-old. (Pre-ACA, the oldest enrollees were typically charged five times as much.)

In the ACA marketplace, subsidy-eligible enrollees pay a fixed percentage of their income for a benchmark plan. The healthy partly subsidize the sick, since the market provides “guaranteed issue” – that is, pricing does not vary according to an applicant’s healthcare needs or health history.

If subsidies can be used for any kind of plan, many healthy people will buy cheaper plans that vary pricing according to an applicant’s medical history, driving up premiums in the guaranteed issue market – if the state proposal even leaves such a market in place. There may be no benchmark plan, offering comprehensive insurance to all, against which subsidies are adjusted to provide coverage affordable to people at varying income levels.

To subsidize medically underwritten short-term plans, subsidies might be fixed amounts that would render comprehensive coverage in the guaranteed issue market unaffordable.

In the ACA marketplace, subsidies adjust according to the enrollee’s age as well as income. Everyone at a given income pays the same amount for a benchmark Silver plan – for example, $129 per month for someone earning $24,000. As the underlying premium grows with age, so does the subsidy. For a 25-year-old, the government’s share of the monthly premium might be $150; for a 64 year-old, $700.

The CMS waiver concepts encourage states to increase the degree to which older enrollees can be charged more than younger ones, while also pushing them toward flatter subsidies. That’s what the Republican ACA “repeal and replace” bill that passed the House in 2017 did – adjusting subsidies moderately for age, but not for income.

The Congressional Budget Office estimated that under that bill, a 64-year-old earning $26,500 would pay $14,600 a year for a plan designed to cover 65% of the average user’s medical costs – compared to $1,700 for a plan covering 87% of costs under the ACA. While this bill offered subsidies to people who earn too much to qualify for subsidies under the ACA, it did so at the expense of enrollees with incomes under 400% of the federal poverty level (FPL), the ACA subsidy cutoff.

Lower income? Out of luck

More than half of enrollees in the ACA marketplace obtain Cost Sharing Reduction (CSR), available with Silver plans for people with incomes up to 250% FPL ($30,350 for an individual, $62,750 for a family of four). More than half of enrollees have incomes below 200% FPL. Below that threshold, CSR sharply reduces deductibles and out-of-pocket costs.

The CMS waiver concepts encourage states to “address structural issues that create perverse incentives, such as the subsidy cliff” – that is, the ACA’s cutoff for subsidy eligibility. That would be great – Congress should level the cliff, capping premiums as percentage of income for all comers – but it would cost money. Under a state waiver, offering subsidies to people at higher incomes means weakening subsidies at lower incomes.

That generally means getting rid of CSR – as did Republican ACA repeal-and-replace bills introduced in the House and Senate in 2017. The House bill would have left low-income enrollees with deductibles over $5,000; the Senate bill, over $10,000. Ditto for a failed innovation waiver proposal submitted by Iowa in 2017, which would have replaced the ACA marketplace with a single plan with a deductible over $7,000. While CSR was added to the proposal via a later amendment, the original proposal might have passed under the new guidance.

How worried should you be?

For any changes like those described here to become reality, a state would have to incorporate them in a detailed waiver proposal, and CMS would have to approve it. Theoretically at least, the proposal would have to adhere to the guardrails that CMS weakened this fall: it would have to cover as many people as the current ACA system, and it would have to make equally affordable and comprehensive coverage “available.” The waiver concept paper acknowledges this, while failing to address how the concepts might stay within even the weakened guardrails.

More importantly, any scheme that attached ACA subsidies to ACA-noncompliant plans, or that seems likely to render coverage unaffordable for low-income enrollees or enrollees with pre-existing conditions, is likely to face stiff legal challenge.

The October guidance may be subject to court challenge on at least two grounds, according to an analysis by Christen Linke Young of the Brookings Institute:

First, it will likely be argued that given the degree of substantive change in law wrought by the guidance, it should have been issued “as a rule subject to the typical notice and comment rulemaking process” rather than as mere guidance, which does not need to go through that vetting.

Second, the guidance’s new test for whether a waiver proposal is approvable “is a significant departure from the statutory text” of the ACA. The statute’s plain language stipulates that a waiver has to provide coverage as affordable and comprehensive to as many people as the ACA program; to assert that the statute merely requires making equally comprehensive and affordable insurance “available” is, shall we say, creative.

Further, it’s questionable whether the waiver concepts could pass muster even under the new CMS guidance. The new guidance affirms that coverage as comprehensive and affordable as that on offer without the proposed scheme has to be available, even if fewer people choose it.. While the CMS fact sheet laying out the waiver concepts states that proposals must meet the statutory guardrails, it offers no hints as to how the developed concepts might satisfy even the “availability” standard.

To the extent possible, however, the Trump administration will use this channel as well as others to promote the temporary insurance now being hawked in millions of robocalls and email pitches – medically underwritten plans riddled with exclusions, such as “drug coverage” that only applies to drugs prescribed in an inpatient hospital setting.

Fortunately, since Republicans failed to repeal the ACA, comprehensive, subsidized health plans in the ACA marketplace should remain available to most of those who need them. But watch your state news for attempts to change that.