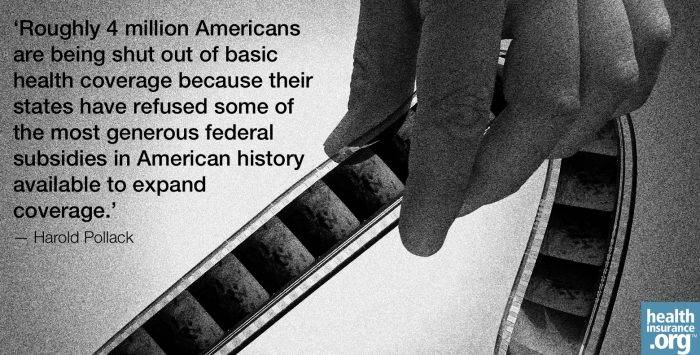 I’m a bit player in the health reform drama. But I have occasionally appeared in news stories because I’ve been an advocate for expanded coverage for many years now. Here at healthinsurance.org and at the Washington Post’s Wonkblog section, I often interview policy experts about various aspects of health reform. Avik Roy, Zeke Emanuel, David Cutler, Don Taylor, Michael Chernew, Henry Aaron, and others.

I’ve interviewed Jon Gruber within this series, too. It’s kind of embarrassing that reporter Keith Koffler from whitehousedossier.com claims to have “uncovered” this incriminating video interview with Gruber. I try so hard to get people to watch them. It’s even more embarrassing that I look so dorky. That’s kind of who I am.

This episode is otherwise hard to understand. The precise passage Koffler finds so incriminating was quoted in the New York Times when this video first appeared.

Mr. Koffler and other conservative bloggers were offended by the following passage:

POLLACK: One of the things that’s really striking to me is, there’s is a politics of impunity towards poor people, particularly non-white poor people that – it’s almost a feature rather than a bug in the internal politics in some of these states, not to cover people under Medicaid even if it’s financially very advantageous to do so.

I think there’s a really important principle to defeat this politically, not just because Medicaid is important for people, but because it’s such a toxic political perspective. It has to be shown that that approach to politics doesn’t work, because otherwise we will really be stuck with some very unjust policies that will be pursued with complete impunity in some of these places.

GRUBER: You know, that’s a great way to put it: There’s larger principles at stake here, when these states are not just turning down covering the poor people, but turning down the federal stimulus that would come with that.

They’re not just not interested in covering poor people. They’re willing to sacrifice billions of dollars in injections into their economy in order to punish poor people. I mean, it really is just almost awesome in its evilness. And I agree, you have to recognize there’s larger principles at stake here.

I stand by my words.

I can’t speak for Professor Gruber, but I don’t see anything he should walk back, either. Roughly 4 million Americans are being shut out of basic health coverage because their states have refused some of the most generous federal subsidies in American history available to expand coverage. This hurts poor people. It also hurts every public hospital, every health clinic, every correctional institution, every city, and county government in states that have refused the Medicaid expansion. 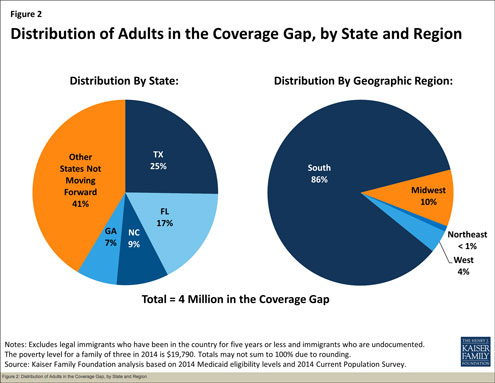 86% of adults in the Medicaid coverage gap live in the South. Source: Kaiser Family Foundation (Click image for larger version.)

stark racial disconnect between the Tea Party’s ascendant politics — and its almost exclusively white leadership — and the state’s black voters, who vote overwhelmingly Democratic. Whites dominate Mississippi’s elected elite, despite the fact that Mississippi is home to a higher percentage of African-Americans — 37 percent — than any other state.

The politics of impunity towards poor people — particularly non-white poor people — is an inescapable part of the story in Mississippi and other states. I derive no pleasure from saying this. It strains credulity to claim otherwise.

Please, watch all of it.

If you listen to our entire wide-ranging conversation, it might surprise you. You might even learn something. He is, after all, one of the top health economists in the nation discussing what he is heartened or discouraged about in the progress of health reform. The full conversation will certainly provide a different — more tempered and accurate impression of Gruber’s views than you’d get from a hit-job compilation of embarrassing #grubergate snippets.

The conservative Daily Caller site “uncovered” another quote from that same conversation in which Gruber said: “Guns are a public health issue.” Of course this is true.

“By the way you have now permanently prevented yourself from winning a high elected office in the United States despite your charisma,” Harold Pollack told Gruber at the end of a three-part interview about Obamacare recorded in April, predicting the backlash Gruber is facing by months in advance.

“You know they’ll be playing this tape back in an endless loop with a guy with a deep voice in the background,” Pollack predicted.

We both chuckled at that. We’re not chuckling anymore.