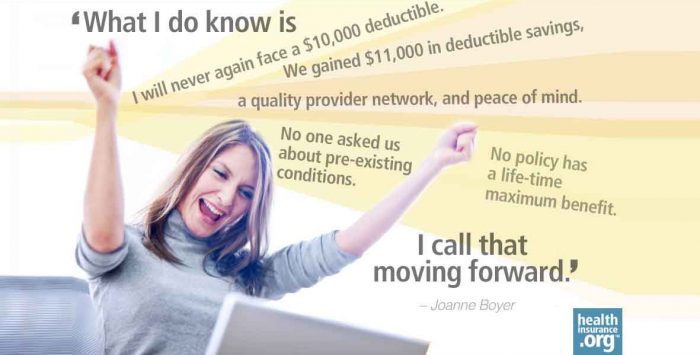 Patience and perseverance. That’s what ultimately drove a successful conclusion to my journey with the Affordable Care Act. This week I officially became part of the ACA, and with it came better coverage at an affordable price – as advertised. Until the ACA passed, a pre-existing condition forced me into a high-risk pool with a plan that ultimately covered next to nothing. For me, and many others January 1, 2014 can’t come fast enough.

However, it’s been anything but smooth ACA sailing until I signed up via MNSure, my Minnesota state-run exchange. Political naysayers have done everything in their power to derail my only shot at affordable health care access.

I sat nervously awaiting the Supreme Court decision that decided the law’s constitutionality and through a presidential election that hinged on “Repeal Obamacare.” Election results, I thought, sealed my access to affordable health care.

Yet it also meant another year of paying monthly premiums of over $300 for my $10,000 deductible high-risk pool policy. I wondered more than once, what would I do if I really needed to access health care in 2013 and needed to come up with $10,000? In addition, out-of-pocket costs forced me to delay some care.

While I waited, I took solace in the fact that Minnesota has always been ahead of other states when it comes to providing health care access for its citizens. I looked forward to the advent of our exchange this summer.

Naysayers at every turn

People cautioned me about my optimism. I had one self-professed conservative insurance broker tell me I should expect to pay $800 a month for single coverage. Yet I remained patient until the “trial calculator” on the state exchange finally showed up in July. Although no actual plan specific information was included, it quickly became clear I would not qualify for any federal tax credit. I make far less than a six-figure salary, but I make more than poverty level.

As October 1 approached – the day the exchanges would go “live” – the first hint of good news arrived. Several states were showing plan costs lower than expected. Minnesota announced the lowest priced plans in the nation. But hold the phone: the naysayers were back in full force. On the first day I could officially log on to MNSure, the federal government shut down in yet another attempt to stop people from accessing the ACA.

While politicians wrangled for more than two weeks in Washington, D.C., I continued to peruse my options on MNSure. It became apparent that my situation might need the services of a skilled licensed insurance broker because my husband also needed insurance via the ACA. He too had a pre-existing condition.

We had questions such as: What made sense with all the different Bronze, Silver, Gold, and Platinum plans out there? One color for him? One for me? A high deductible for him? A lower one for me? I picked up the phone and made an appointment with my broker. Although trained ACA navigators provide valuable assistance to those using the exchanges, they cannot make recommendations as to which plan to chose. I needed more than navigation help; I needed someone to assist me with dissecting the plans.

The shutdown ended, and the ACA was here to stay. No matter what the headlines screamed about the federal web site, in Minnesota the system worked. And this week was my scheduled date to sign up.

After discussions with the broker, my husband and I decided on a platinum plan – the top of the line. We chose a lower deductible ($2,000) plan that includes 100 percent payment for all medical expenses once the deductible is met. Combined premiums are $814. I cannot tell you exactly how much more or less these plans cost us because Minnesota’s high-risk pool is in the process of shutting down. There are no 2014 rates available for comparison. Based on 2013 rates, we will be paying slightly higher monthly premiums. But that is not an apples-to-apples comparison.

What I do know is that I will never again face a $10,000 deductible. We gained $11,000 in deductible savings (including $3,000 with the change in my husband’s plan), a quality provider network, and peace of mind. No one asked us about pre-existing conditions. No policy has a life-time maximum benefit. I call that moving forward.

Success stories vary with each ACA experience. Many individuals will save premium dollars; others, like me, will find savings when seeking actual care. But I can’t help but think what the ACA does for literally millions less fortunate than me. It provides them health care, human dignity, and hope for a healthier life.

The real success of the ACA is that it moves us past the “me, me, me” scenario that dominates our culture today and moves the conversation more to a “we” as a people and a country will be better off because of the ACA.

The ACA is far from perfect, but I would urge anyone who has hesitated about checking it out to do so. And don’t be afraid to seek the professional help of a licensed broker. Talk it out. Ask questions. Don’t let someone else decide for you whether the ACA works or doesn’t.

Find your own success story. We will all benefit from it.