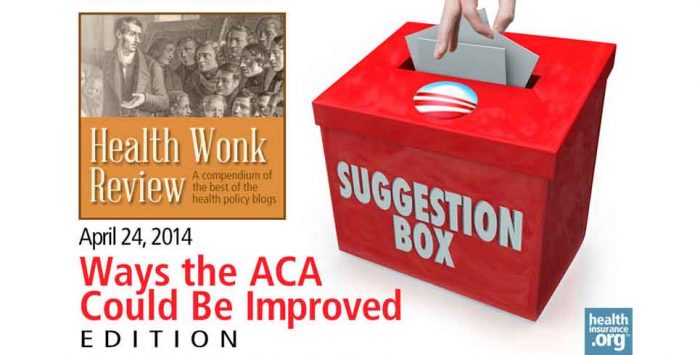 It’s no secret that we’re staunch supporters of the Affordable Care Act and the great gains it has delivered to millions of Americans who were desperate for affordable health coverage.

But heck, we’re also realists. We know the law is only a starting point. It’s got glitches here and there, and it was created with weaknesses that opponents have, not surprisingly, attempted to exploit. But not only that, the law really could be improved to do even MORE.

So no, we’re most certainly not in the “repeal and replace” camp, but yes, we could stand to see some improvements. But where to start?

Well, we’re all in luck, because Louise Norris has devoted an entire edition of Health Wonk Review to the idea that the law could use a nip, a tuck, a little polish, a tweak … Okay, you get the picture.

Anyway … whether you love or hate Obamacare, this week’s edition truly has something for anyone wondering, “Where do we go from here?” Pick up a copy over at your virtual newsstand.

Next up: Jason Shafrin hosts Health Wonk Review on May 8 over at Healthcare Economist.