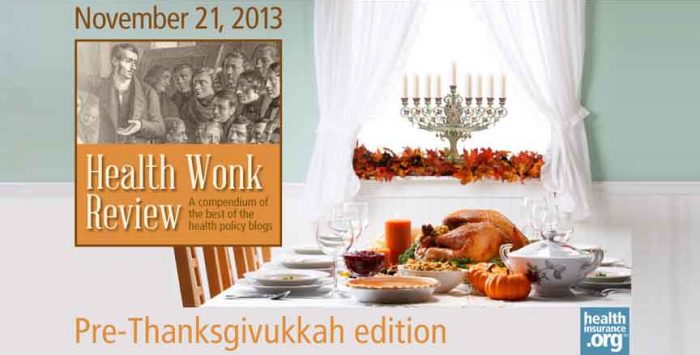 This week, we offer a hat tip to Henry Stern over at INSUREBLOG for putting together the pre-holiday – “pre-Thanksgivukkah” – edition of Health Wonk Review. He cobbled together one of the longer reviews in recent memory, and spruced it up with some thought-provoking quotations to boot.

In answer to the obvious question … Yes, there’s plenty of opinion about the Obamacare rollout – including several takes on President Obama’s controversial announcement that he would allow carriers to let folks with cancelled policies keep them for another year.

Jonena Relth at the Healthcare Talent Transformation blog says Obama’s proposal was ridiculous; Maggie Mahar calls the President’s proposal a brilliant “end run” around House Republicans; while Timothy Jost gives the proposal a thorough exam. Louise Norris, meanwhile, explains how plans in place today will fare at their next renewal.

Of course, there were status updates about online trials and tribulations, including Joe Paduda’s prediction that HealthCare.gov won’t be fixed by the end of the month; David Harlow’s reassurances that the slow enrollment shouldn’t be cause for alarm; Brad Wright’s Q&A about ACA “fumbling”; and, from Anthony Wright, good news from California – where that exchange is on track and enrolling 2,000 exchange customers a day.

And there’s more, but you’ll have to belly up to the HWR table to dig in.

Next up: Jason Shafrin at Healthcare Economist takes the HWR helm on December 5.