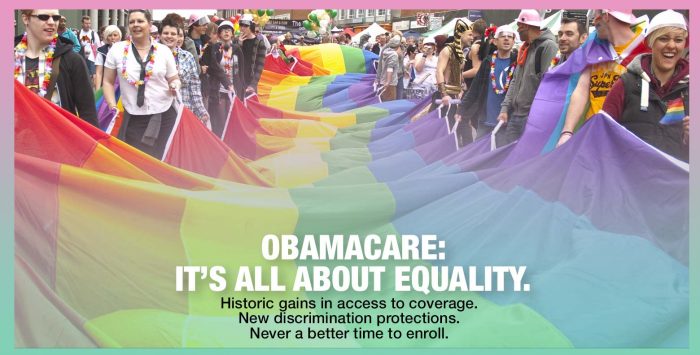 If you’re not lesbian, gay, bisexual or transgender, it might be tough to appreciate just how important the Affordable Care Act (ACA) is to the LGBT community. Thanks to the ACA, LGBT people have better healthcare access, a lower uninsured rate — and better protections against discrimination — than ever before.

These gains are historic. And there’s no better time to further advance those gains than during the week of December 7-11, 2015, which has been designated as an LGBT Week of Action by the White House, the U.S. Department of Health and Human Services and enrollment partners.

“We want people to feel empowered to look at their coverage options, see what works for them, and be part of this historic change,” says Kellan Baker, a senior fellow at the Center for American Progress (CAP) and a steering committee member for Out2Enroll, a national initiative to connect LGBT people with health insurance options under the ACA, or Obamacare.

During the LGBT Week of Action, there will be a variety of events to reach out to — and educate — people who still need to enroll. All the details are posted at Out2Enroll. 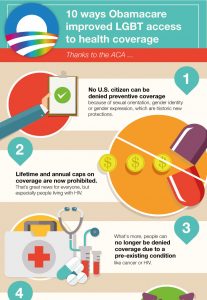 The first is the U.S. Supreme Court decision legalizing same-sex marriage. As Baker points out, marriage is “deeply intertwined with benefits,” and getting married is a special enrollment trigger. Married people are now treated the same way in the insurance marketplace whether they’re gay or straight.

Recognizing this ongoing challenge, the HHS Office for Civil Rights has implemented a process that makes it easy for LGBT people to report discrimination. Out2Enroll provided training to HHS personnel so they’re prepared to process these complaints.

“The only way regulators know is if people report their bad experiences,” Baker says. “If someone’s plan isn’t covering the services they need as a transgender person, or a baby’s pediatrician refuses to see her because she doesn’t approve of her lesbian parents, they need to tell their story to regulators.”

He says the experience of a lesbian couple in Michigan whose pediatrician turned them away is one of the stories Out2Enroll shares with regulators to help them understand why enforcing Section 1557 is so important.

“So many transgender people and gay people are just accustomed to hiding, and feeling like they’re going to be discriminated against, that they wonder why they should expose themselves to that,” Baker says. “That’s why we’re working with enrollment assisters and civil rights regulators to make sure people know there are protections now that weren’t there before.”

Investigation and resolution of discrimination cases is already underway at the HHS Office for Civil Rights. Reporting discrimination is simple – no legal expertise required. Simply visit hhs.gov/ocr and file a complaint.

“Don’t just tell your friends,” Baker adds. “Tell someone who can do something about it.”

No better time to take action

There are two key points Baker wants the LGBT community to remember during the Week of Action and beyond.

“Get covered, be part of history and avoid paying the fine for not having insurance,” he says. “And make your coverage and healthcare work for you. If you’re not getting what you need, assert your rights.”