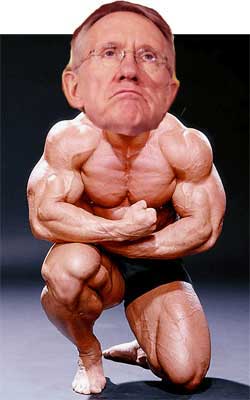 When the House passed its version of health reform legislation last week, the development may have sent chills down the spines of those who oppose the Democrats’ proposed solutions. But a quick read-through of Suzy Khimm’s piece in The Treatment yesterday should be equally chilling to folks who think the battle over health reform is anywhere close to being over.

Khimm’s piece should serve as an eye opener to anyone who might suggest that Harry Reid is padding his schedule when he says a Senate bill won’t pass until Christmas – at the earliest. Other Dems are saying even that is optimistic.)

For as much as talking heads keep pointing out that Reid needs 60 votes in the Senate to stop a filibuster, what hasn’t been talked about much is the fact that Reid needs 60 votes at least three times in this process: 1) for a “motion to proceed” (a vote that could happen as early as Tuesday) 2) for a vote to move past a Republican “point of order,” and 3) for a final vote on passage of the bill.

That final vote happens only after debate on the bill’s amendments – and there are likely to be many introduced by Republicans. But that’s just the beginning of opposition stall tactics that could well include the reading of the entire bill aloud on the floor, as threatened already.

Reid’s work, Khimm points out, will be “heavy lifting.” We think that’s putting it lightly.

We think Reid’s going to need some steroids.