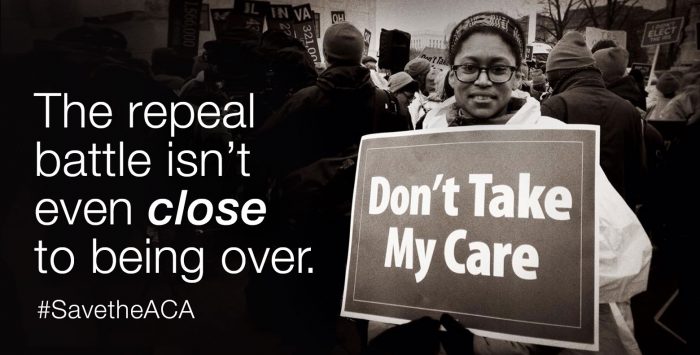 Have you seen headlines today about Obamacare being repealed in the “middle of the night”? Have you been incensed by stories circulating on social media about how Republicans voted to eliminate protections for people with pre-existing conditions?

Yes, there was a vote last night – and yes, Republicans rejected all of the amendments Democrats tried to tack on to S.Con.Res.3, a concurrent budget resolution. But despite a flurry of tweets and Facebook shares this morning, the Affordable Care Act has not been repealed. Not yet, anyway.

Granted, the Republicans are staying true to their threat to move Obamacare repeal along as quickly as they can – but last night’s Senate voting was just the start of the process.

Supporters of the law who may fear a death blow was struck last night actually have plenty of time to channel their fear and nervous energy created by the procedural vote. The vote to actually repeal the ACA is still at least several weeks away.

Last night was a victory for the GOP, but not the victory

Enzi explained that the resolution’s purpose was to provide instructions to four authorizing committees to draft legislation for a reconciliation bill to repeal the ACA. The committees must achieve modest deficit reductions with their legislation, and their drafts are due by January 27. The committees include two in the House: Ways and Means and Energy and Commerce. And two in the Senate: Finance and Health, Education, Labor, and Pensions. (If you want to reach out to their members, you can find them here.)

With 52 Republicans and 48 Democrats in the Senate, normal legislation to repeal the ACA wouldn’t have the 60 votes necessary to overcome a filibuster. But a reconciliation bill – which only addresses federal spending – needs just 51 votes to pass, and isn’t subject to a filibuster. Hence the reason Enzi introduced S.Con.Res.3, to get the ball rolling on the reconciliation process.

Potential for delay got Dems’ hopes up

After Enzi introduced the resolution, several Republican senators expressed concerns about voting to repeal the ACA before a replacement bill has been introduced. It was a ray of hope for Democrats, though ultimately, all but one Republican voted to begin the process of creating a reconciliation bill to repeal the ACA.

Democrats were also optimistic about the fact that five Republican senators introduced an amendment (Amendment 23, out of the 189 that were introduced for S.Con.Res.3) to postpone the due date for the committees to submit their recommendations for reconciliation legislation. Instead of January 27, it would have been March 3, giving lawmakers more time to come up with a replacement plan in the interim.

But Amendment 23 was withdrawn by Sen. Bob Corker (R-Tenn.), who said that his fellow Republicans had assured him that even without the amendment, January 27 is merely a “placeholder” and not a deadline by which the reconciliation legislation must be fully drafted.

And those two disappointing developments set the stage for the ultimate defeat late last night – actually a little after one o’clock in the morning – when the Senate voted 51-48 to pass S.Con.Res.3. The vote was split almost entirely along party lines:

Was the vote a surprise? Not really.

This morning, Republicans and president-elect Donald Trump were jubilant that S.Con.Res.3 has passed the Senate. Trump wasted no time in raising the ire of Obamacare supporters with his gloating tweet (perhaps least surprising of all):

Congrats to the Senate for taking the first step to #RepealObamacare– now it's onto the House!

Now, the resolution is headed to the House, where a vote could happen as soon as Friday the 13th of January. Assuming the House passes the resolution as expected, the committees will begin drafting reconciliation legislation to repeal spending-related aspects of the ACA. (To see roughly where they’re headed, 2015’s H.R.3762 is a good example of a reconciliation bill that Congress passed last year to repeal the ACA. It was never enacted, though, as it was vetoed by President Obama).

Once the reconciliation bill is formally introduced, it would have to be passed by the House and the Senate, and then signed into law by the President. But we’re still weeks away from the legislation even being introduced.

And again – while this is all completely distressing to Obamacare supporters – this is all happening pretty much as expected.

What about all those ACA provisions that were ‘killed’?

There’s been plenty of talk today about the resolution itself, but the 189 proposed amendments to S.Con.Res.3 have generated lots of controversy and concern as well. ACA supporters spent the day talking about the defeat of those amendments, which were introduced in a process known as a “vote-a-rama.”

‘This is a death sentence for me’: Patients react in horror to GOP’s late-night Obamacare repeal https://t.co/hH2i4bj85E

But here’s the thing: a budget resolution isn’t the same as other pieces of legislation. Even if passed, it doesn’t head to the President for a signature, or become law. It’s just a roadmap for Congress – in this case, instructing them on how to proceed with drafting the reconciliation bill.

So although the Senate did indeed reject amendments that would have protected Americans’ ability to obtain coverage for pre-existing conditions, kept contraceptive coverage on all plans, allowed young adults to remain on their parents’ health plans until age 26 – and even allowed prescription drugs to be imported from Canada – the votes on those amendments don’t actually change anything.

Sen. Benjamin Cardin (D-Md.) explained that the vote-a-rama is “about the big issue, it’s not about the amendments themselves.”

The amendments that Democrats introduced were essentially symbolic, forcing Republicans to publicly cast their votes for or against retaining various aspects of the ACA. And it worked, as evidenced by the flood of social media posts about the Senate stripping away protections for people with pre-existing conditions last night. (There is no doubt that Democrats will use those votes to castigate Republican opponents during the 2018 campaign season.)

Trump has mentioned that he’d be in favor of keeping pre-existing condition protections and allowing young adults to remain on their parents’ health plan, but we won’t know what the GOP’s specific plan is for things like that until they introduce legislation to replace the ACA, which could be several months down the road.

The reconciliation process, which H.Con.Res.3 begins, only allows for legislation that directly impacts federal spending. Things like pre-existing condition protections and the ACA’s essential health benefits would not be impacted by the soon-to-come reconciliation bill, but could be addressed in future replacement legislation.

Unfortunately, Republicans have begun forging ahead with the repeal process before showing the American people their plan to replace the ACA. If we continue down this “repeal and delay” path, we could end up with a destabilized health insurance market by 2018, and general chaos. There is clearly cause for concern.

It’s not over. Not even close.

Last night’s vote did not repeal the ACA. It did not eliminate protections for people with a pre-existing condition. It did not mean that your 23-year-old is about to be kicked off your health insurance policy.

It did begin the process of repealing the ACA. But it’s a process that will require numerous votes, and there will be opportunities for voters to weigh in at every turn.

If you’re concerned about the path that Congress is currently taking, Andrew Sprung has written a comprehensive explanation of the actions you can take right now to protect the ACA, to raise your voice about the perils of voting to repeal before the American people have seen the replacement, and hopefully convince Congress to avoid a scenario where millions of Americans lose their health insurance.

The battle truly has just begun.