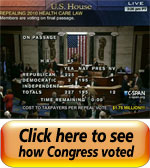 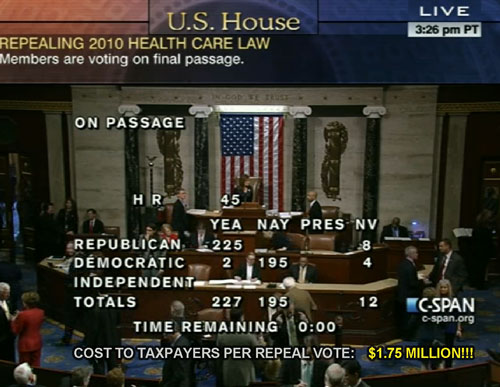 House Speaker John Boehner tells us that more than 70 freshmen Republicans had been pushing him to give them a chance to go on the record in opposing the 2010 Affordable Care Act. After all, last fall many voters sent them to Washington specifically to fight Obamacare. Shouldn’t their elected representatives have a chance to stand up and vote on the law?

Moreover, for the newbie legislators, this was a media opportunity: many of them made speeches in the several hours of debate preceding the vote. Let’s hope that their mothers got to see them on C-SPAN.

Your tax dollars at work

Does this justify the expense of letting the House vote 37 times on a bill that everyone knows will never pass the Senate? Some suggest that legislators might better spend their time (and our money) figuring out how to create jobs.

Or Republicans might put their heads together and come up with an alternative reform bill. This is something that they have been promising since 2010. Instead, all they seem able to do is to produce plans for repealing, defunding, or knee-capping the ACA.

As for last week’s vote, even the Congressional Budget Office (CBO) couldn’t take it seriously. When preparing for this latest showdown, Republican Paul Ryan requested an update to CBO’s July 2012 estimate that repealing the ACA would cost more than it would save, increasing the deficit by some $109 billion over the coming decade (2013-2022.) Apparently, Ryan fantasized that this time, CBO would have a different answer.

CBO replied to his request: “Preparing a new estimate of the budgetary impact of repealing the Affordable Care Act would take considerable time – probably several weeks – for CBO and the staff of the Joint Committee on Taxation, because there are hundreds of provisions in the ACA and those provisions are already in various stages of implementation. Moreover,” he wrote, “we have just finished the time-consuming task of updating our baseline budget projections and need to finish our analysis of the President’s budgetary proposals.”

I like economist Jared Bernstein’s paraphrase of CBO’s response: “You guys go ahead and keep gettin’ your crazy on … over here we’re kinda busy doin’ actual work, so can’t help you right now.”

CBO added that when it does have time to do an update, it expects similar results. Repealing health care reform would not save us money.

Are they crazy … or cunning?

You might think that by continuing to press for a bill that will never succeed, Republicans are once again exhibiting their self-destructive tendencies. But I would argue that House Republican leaders are not crazy, at least not in an easy-to-understand way. They’re cunning.

Ask yourself this: How many people skimmed or half-heard the news stories telling them that the House had passed a bill to repeal Obamacare?

This helps to explain why 12 percent of all Americans believe that the ACA already has been scrubbed. Every time a commentator mentions “health care reform” and “repeal” in the same sentence, the words will sink into that morass of half-truths and fictions that we call “the conventional wisdom.”

At best, people will understand that the ACA is still the law of the land, but they will take the repeated efforts to kill reform as a sign that Obamacare represents a threat to life, liberty and Democracy.

After all, why would Congress spend so much time trying to overturn a law if there wasn’t something wrong with it? Or, “I don’t know what’s in that bill, but I know I don’t like it.”