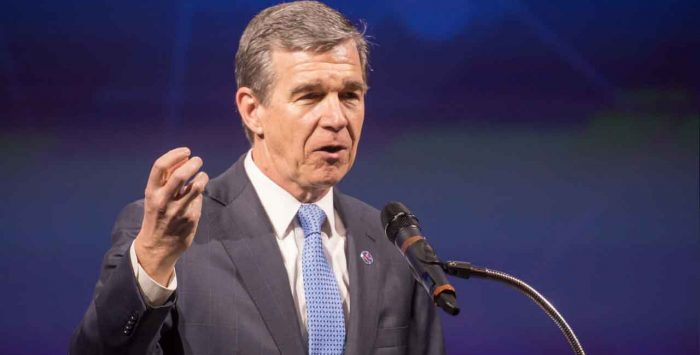 Gov. Roy Cooper vetoed a GOP-backed budget because it didn’t include Medicaid expansion. Photo by NCDOTcommunications

Here’s a look at what’s happened recently in health insurance and health policy news at the state level.

Open enrollment in the individual health insurance market is only a month away, and some states are starting to enable window shopping. As of October 1, online visitors can preview 2020 health plans on the exchanges in California, Idaho, Maryland, and New York.

Enrollment starts in just two weeks in California, and on November 1 in the rest of the country. In most states, it ends on December 15, although there are several states where the deadline has been extended.

Enrollment in Idaho’s expanded Medicaid begins next month, after voters in the state approved a Medicaid expansion ballot initiative last year. But GOP lawmakers worked to impose modifications, including a proposed Medicaid work requirement for the newly-eligible population. The state submitted its work requirement proposal to CMS a few days ago, and is now awaiting federal approval to implement the work requirement sometime next year.

Blackjewel coal miners can get retroactive coverage through Wyoming’s exchange

Nearly 600 Wyoming coal miners lost their health insurance at the end of August when Blackjewel/Revelation Energy terminated its health plan. These workers qualify for a loss-of-coverage special enrollment period in the individual market — which is always the case when someone loses employer-sponsored health insurance. But the Wyoming Department of Insurance worked with the federal government to also allow these workers the option to have their coverage effective date retroactive to September 1 in order to prevent gaps in coverage created by the confusion surrounding their abrupt loss of coverage. Affected workers have until October 30 to enroll, and must contact the Wyoming Department of Insurance in order to obtain a September 1 effective date.

Colorado no longer has short-term health plans, so enrollment in sharing ministry plans is increasing

Colorado is one of 11 states where there are no longer any short-term health plans for sale (and one of six where this is a new development; there were short-term plans in Colorado until April 2019). Colorado’s robust new short-term health insurance regulations were designed to prevent short-term insurance plans from harming the individual major medical market and potentially leaving enrollees with inadequate coverage. But the Colorado Sun’s John Ingold explains how the resulting exodus of short-term insurers from the market has also resulted in increased demand for healthcare sharing ministry plans, which aren’t subject to insurance regulations at all.

North Carolina is one of 14 states where Medicaid expansion has not yet been adopted or implemented, and hundreds of thousands of residents are stuck in the coverage gap as a result. Democratic lawmakers are working to shepherd an expansion bill through the state House, although its prospects are dim in the Senate. And Medicaid expansion has also caused a budget stalemate in North Carolina that has gone on for months: Governor Roy Cooper vetoed the GOP-backed budget because it didn’t include Medicaid expansion, and House Republicans created a national firestorm last month when they overrode the veto in a surprise vote while Democratic lawmakers were at a 9/11 memorial ceremony. Votes are expected this month on the Medicaid expansion bill in the House and a budget veto override in the Senate. And while the issue has been front and center in North Carolina throughout 2019, it appears unlikely that expansion will pass this year.