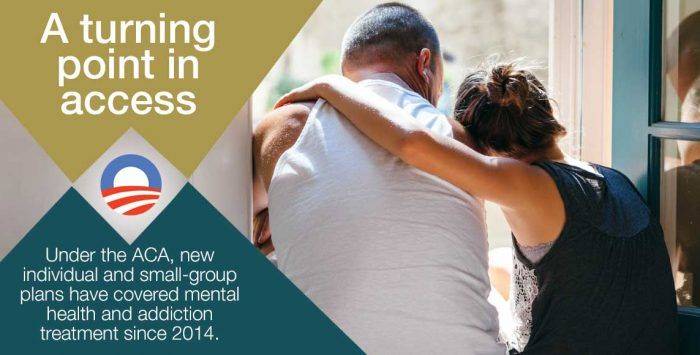 Before the Affordable Care Act (aka Obamacare) was enacted, mental health coverage was often lacking from health plans sold in the individual market. One in five American adults will experience a mental health issue at some point, but historically, millions have not gotten the care they needed due to the challenges of the health insurance market.

And in recent years, the opioid epidemic has cast a spotlight on the need for substance abuse treatment, which falls under the umbrella of mental/behavioral health care. Medicaid expansion — a cornerstone of the ACA — has dramatically expanded access to addiction treatment in some of the states that have been hardest-hit by the opioid epidemic.

In 2013, a person with a bipolar diagnosis was unable to obtain private individual health insurance in most states. The same was true for people with schizophrenia and other psychotic disorders, anorexia, alcoholism, and a variety of other serious mental or behavioral illnesses.

Even for people with relatively minor mental health diagnoses, health plans were allowed to increase premiums during the initial underwriting process, and some would still reject these applicants.

The underwriting rules that applied to mental health treatment often trapped people in the health plan they had when they were diagnosed, with no realistic opportunity to shop around when annual rate increases were announced. And for people who were uninsured at the time of their diagnosis, securing coverage was challenging and expensive – or impossible, depending on where they lived.

For those who had insurance, it often didn’t cover mental health care. According to a 2013 analysis conducted by HealthPocket, only 54 percent of individual health plans in the United State included coverage for substance abuse treatment, and 61 percent covered mental health treatment. (Coverage was better among employer-sponsored plans.)

In 1996, and again in 2008, Congress passed mental health parity laws, requiring large-group plans that cover mental health treatment to do so with benefits that are no less favorable than the benefits provided for medical/surgical care. The 2008 Mental Health Parity and Addiction Equity Act (MHPAEA) incorporated coverage for addiction treatment as well as general mental health care.

But the mental health parity laws don’t require large-group plans to cover mental health and addiction treatment. They only require the plans to provide parity if such coverage is provided. And parity laws didn’t apply to plans sold in the individual and small group markets.

The Affordable Care Act filled in the gaps

The Affordable Care Act was a turning point in terms of access to behavioral health coverage. The ACA eliminated medical underwriting in the individual and small group markets starting in 2014, so medical history — including mental health history —no longer results in enrollment denials or higher premiums.

The ACA also extended MHPAEA to include individual and small group plans, as well as Medicaid, in addition to the large group plans to which it originally applied. Since 2014, all new individual and small-group plans have covered mental health and addiction treatment, and have been required to do so with benefits that are no less favorable than benefits for medical/surgical care.

Large-group plans are not required to cover the ACA’s essential health benefits (although if they do, they must do so without annual or lifetime dollar limits), but they are governed by MHPAEA. So if they provide coverage for mental health and addiction treatment, they must do so with parity to medical/surgical benefits. Shel Gross, Director of Public Policy for Mental Health America of Wisconsin, notes that large-group plans already tended to provide relatively generous benefits for mental health and addiction treatment prior to the ACA, and that’s still largely the case today (large group plans, in general, tended to provide more generous benefits across the board; this is why the ACA’s essential health benefits requirements were written to apply to the individual and small group markets).

Gross noted that there are still access problems stemming from the fact that carriers can – and do – restrict their formularies (covered drug lists), despite the fact that mental health drugs appear to work differently for different individuals. But compared with pre-2014 when health plans could opt to not cover medications at all – or to only cover generic drugs – the ACA has made prescriptions much more accessible.

The ACA also requires all non-grandfathered health plans – including large-group plans – to cover a range of preventive care at no cost to the patient. Among the benefits included are depression and alcohol misuse screening for adults and adolescents, as well as autism screening and behavioral assessments for children.

In 2010, the ACA began allowing young adults to remain on their parents’ health plans until age 26. This provision – along with the expansion of Medicaid and premium subsidies in the health insurance exchanges – has resulted in a sharp decline in the number of young adults without health insurance. According to US Census data, 22.1 percent of people aged 19-25 were uninsured in 2013, and that had fallen to 13.1 percent by 2016 (since then, uninsured rates across all non-elderly populations have been trending upward under the Trump administration).

Johanna Jarcho, Ph.D, is a postdoctoral fellow at the National Institute of Mental Health. She explains that “the vast majority of mental health disorders do emerge during one’s adolescence or early 20s.” With the drop in the uninsured rate for young adults, treatment for mental health and addiction problems is much more within reach for this demographic than it was prior to the ACA.

Unfortunately, the uninsured rate has been creeping back up under the Trump Administration. Some of the ACA’s coverage gains had been eroded by 2018, a trend that continued in 2019. And the coverage losses have been exacerbated by the COVID pandemic.

It’s no secret that poverty and addiction are correlated. And World Health Organization data indicate that the prevalence of common mental illnesses among the poor is about twice as high as among the rich.

The prevalence of behavioral health problems among low-income Americans highlights the importance of the ACA’s Medicaid expansion in making treatment available to this demographic.

Even before the ACA expanded Medicaid to millions of low-income, non-disabled Americans, Medicaid was covering more behavioral health treatment in the U.S. than any other payer. And from late 2013 to mid-2020, total Medicaid and CHIP enrollment had grown by more than 19 million people, increasing Medicaid’s reach in covering mental health care in the US.

An estimated 1.2 million people with substance use disorders gained health coverage as a result of Medicaid expansion in its first few years. This is beneficial not only to the patients, but also to the hospitals and health care providers who care for people with serious mental health issues. A Commonwealth Fund analysis found that in states where Medicaid has been expanded, 13.4 percent of opioid-related hospitalizations were for uninsured patients in 2013, and that had fallen to just 2.9 percent by 2015. In states that hadn’t expanded Medicaid, the drop was only from 17.3 percent to 16.4 percent in that same time frame.

By 2020, up to 32 million people have gained access for the first time to mental health and addiction treatment coverage as a result of Medicaid expansion. And according to a 2015 Kaiser Family Foundation analysis, Medicaid benefits for behavioral health services tend to be more comprehensive than the benefits provided by private plans available in the ACA exchanges.

But 14 states still haven’t expanded Medicaid, and there are more than 2.3 million low-income adults – many of whom suffer from behavioral health problems – in those states who have no realistic access to health insurance without Medicaid expansion (note that Missouri and Oklahoma will both expand Medicaid by mid-2021, and Georgia plans to partially expand Medicaid, albeit with a work requirement).

A 2014 report by the American Mental Health Counselors Association shows how pervasive mental health problems are among people with household income under 138 percent of the poverty level, and highlights the importance of ongoing legislative and advocacy work to expand Medicaid in every state.

Still work to be done

The ACA has dramatically increased coverage for behavioral health treatment. But the National Alliance on Mental Illness continues to bring attention to the challenges people face in obtaining mental health care, despite the changes that the ACA imposed.

Although insurance coverage – with behavioral health benefits – is much more widespread than it used to be, access to care is still limited in some circumstances. In many states, there’s a shortage of mental health providers, which is magnified in rural areas. Shel Gross noted that two- to three-month wait times are not uncommon when new patients are seeking an appointment with a psychiatrist.

A 2017 Milliman study found that mental health care is much more likely than other medical care to be provided out-of-network, and insurers tend to reimburse mental health providers less than they reimburse primary care providers. Largely as a result of what the providers see as low reimbursement rates, nearly half of private psychiatrists in the US don’t accept any health insurance at all — they’re out-of-network no matter what insurance the patient has. When Milliman revisited this issue in 2019, they found that the out-of-network problem was persisting, and appeared to be worse than ever.

The mental illness with the highest mortality rate is anorexia nervosa. And yet patients continue to face insurance-related barriers that prevent them from receiving residential treatment for anorexia.

Clearly, there is still work to be done. But without the ACA, we’d still have 45 million people without health insurance, including a significant number of people with behavioral health problems (and that was pre-pandemic; the COVID outbreak would have driven that number even higher without the ACA’s expansion of Medicaid and premium subsidies in the individual market). And health plans would still be able to deny applications based on medical history, and sell plans that didn’t cover behavioral health treatment at all.

The Trump administration has made it easier for people to use short-term health insurance for extended periods of time. Consumers sometimes don’t realize that these plans typically don’t cover mental health care, until they or a dependent are in need of mental health or substance use treatment. The Biden administration might roll back the rules on short-term health plans, however, limiting them to once again being used only to fill short gaps in coverage, as opposed to standing in for real health insurance.