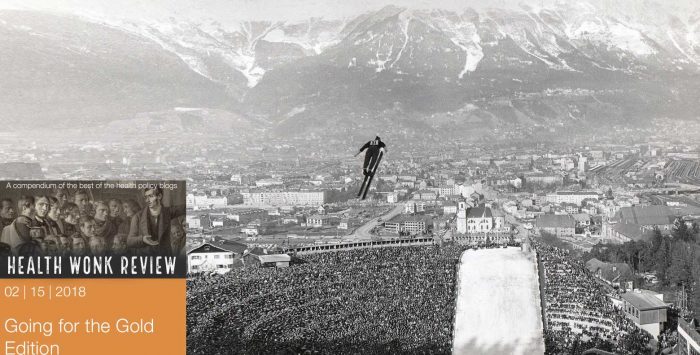 Is the JPMorgan/Amazon/Berkshire Hathaway healthcare alliance the “worst idea ever?” Joe Paduda – over at Managed Care Matters – doesn’t think so. In fact, it’s not the proposal that’s getting low marks from Paduda.

In Media coverage of Amazon/Berkshire/JPMorgan misses the point. Paduda gives critics of – and coverage of – the healthcare alliance a thumbs down. He also speculates on some outcomes of the A/B/J alliance.

Meanwhile, David Harlow has a medal-worthy rundown of the Amazon/Berkshire/JPMorgan alliance and also Apple’s foray into personal health records. David asks, “Are they both less than they seem? What would it take for these announcements to really capture our attention?”

David shares his thoughts on what it will take for these behemoths to succeed in A tale of two tech titans hoping to help healthcare.

And speaking of behemoths and healthcare, in Anthem Insurance & Emergency Room Visits That Go Uncovered Louise Norris offers a great explainer about unexpected ER bills and a controversy over how insurers pay for trips to the ER.

Norris is, of course, writing about Anthem, which issued new rules in Georgia, Indiana, Missouri, and Kentucky in 2017 that shift the cost of ER visits to the patient if a review of the claim determines that the situation was not an emergency after all.

An infraction worthy of a DQ

At Health Care Renewal, Roy Poses brings us the tale of an Olympic-level assault on freedom of the press – one that rises to the level of not doping but perhaps dopiness.

Head-to-head action that will make you hit Instant Replay

This week’s submission from #CareTalk – Mr. Azar Goes to Washington – actually required me to tune in to a 10-minute discussion on YouTube. And I’ve gotta say I was both entertained and enlightened by the banter between David Williams (Health Business Group) and John Driscoll (CareCentrix) as they made predictions about the impact of newly appointed HHS Secretary Alex Azar.

Come for the zingers. Stay for the Lightning Round.

International flavor is, of course, what the Olympics is all about – and Jason Shafrin definitely fills the bill with his fascinating look at Health care in Peru.

Let’s just say that if health systems competed for medals, Peru would have a tough time overcoming its apparent underdog status. Spoiler: life expectancy in Peru is ranked 126 out of 224 countries. (Before 2007, more than 60 percent of the population had no health insurance coverage.)

A medal for members of Congress?

Over at ACASignups.net, Charles Gaba has the dirt on efforts by Senate Democrats to help stabilize the Affordable Care Act by pushing for increased ACA subsidies. Should Patty Murray get a medal for her efforts? Not sure, but Charles should definitely get a Gold for his tireless work to deliver health reform updates and analysis to us all.

But wait. Tom Lynch at Workers’ Comp Insider is also awarding high marks to * gasp * legislators in DC. In Who’d A Thunk It? Something Good Out Of DC!, Lynch explains how “in a rare Washington Kumbaya moment,” legislators dedicated a little pork to “poor people who are aging and sick: America’s Dual Eligibles.”

“Finally, this Congress has done something that will benefit our most vulnerable citizens. Let’s hope it’s not a one-off,” Lynch writes. (And we concur.)

Something else we can all cheer for

And speaking of news that gives us hope and inspiration … Henry Stern at Insureblog had a post that elicited a cheer from Yours Truly this week.

In Something different (and potentially quite helpful), Stern adds his voice to an apparently growing movement intended to give us all more coverage when we go to the hospital. I won’t spoil the post for you, but I will drink to Henry’s sentiment with a wink and a “Bottoms up!”

A recap from the podium. No, not THAT podium.

OK. So it wasn’t a medalist podium somewhere in South Korea, but Andrew Sprung did make it to that OTHER important convo in 2018 – Health Action 2018, Families USA’s annual confab of healthcare activists.

Andrew reports that the event was “largely devoted to taking the measure of the political power somewhat miraculously tapped by a wave grassroots passion and action that staved off repeal – and groping toward a path by which Democrats can build on or move beyond the ACA in years ahead.”

His recap of the conference – Democrats and activists prepare health care offensive – examines what kinds of next steps – or false starts – the conference conversations pointed toward.

And finally – a story of indomitable spirit

The thrill of victory in defeating ACA repeal. The agony of Obamacare sabotage. It’s a great story.

Also great? A story on this site: Shawn Dhanak’s account of four consumers who are ignoring news of health reform setbacks and continuing to put their faith in the ACA’s protections. They’re still enrolling – like their lives depend on it.

So put on your giant foam finger and join me in waving a little American flag for this week’s contributors.

You stuck that landing!