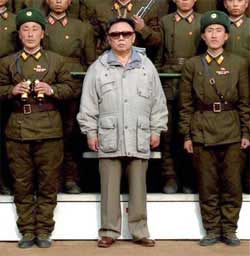 This story in The New York Times reminded us of the old saw about the guy who felt bad about not having shoes until he met a man with no feet.

I’d say that in this story, the United States would be the guy with no shoes – millions of uninsured and skyrocketing health care costs (despite the fact our country pays more per capita on health care than any other). The guy with no feet would  obviously be North Korea, where per capita spending per year is $1.

The North Koreans are definitely not spending recklessly and, as the article points out, the country can boast that it offers free medical service for it citizens. Unfortunately, at $1 a head, they have to pinch pennies in areas such as anesthesia. And by pinch pennies, we mean “not spend any pennies on anesthesia” – even when your patient is having a leg amputated or appendix removed.

For North Koreans, that kind of medical system seems like a true “death panel” or perhaps “I’d rather be dead panel.”

We post this only because we feel it’s worth noting that things could be a whole lot worse.