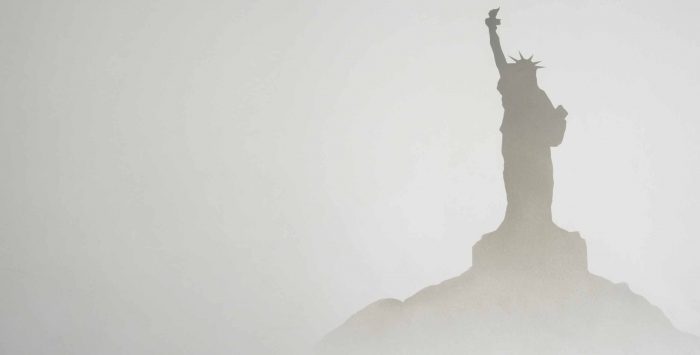 Though it may never go into effect, the amended public charge rule has already had a chilling effect on immigrant use of services.

The Affordable Care Act was the Obama administration’s signature domestic policy accomplishment. The administration accordingly had an enormous political as well as ideological and moral stake in making the law work, and the Obama-era Department of Health and Human Services (HHS) invested much of its energy in encouraging people to get insured. Flawed though the ACA is, the nation’s uninsured population shrank dramatically from 2014 – when its major programs launched – through 2016.

The Trump administration has other priorities, chief among them deterring immigration and reducing federal spending on health coverage for low-income people. In furtherance of these goals, it’s taken several steps to discourage immigrants and low-income Americans from enrolling in government-supported health insurance to which they’re legally entitled. Those steps include (in reverse chronological order):

Do you sense a pattern here? So far, federal courts have cast a cold eye on policies designed to deprive people of benefits from federal programs designed to help low-income people obtain necessities of life such as food, shelter and health care.

That may not last: The Supreme Court may side with the administration in these cases – and Republicans are filling federal bench vacancies at a record pace with conservative judges receptive both to assertions of executive power and to restrictions on federal benefits. But for now, judges are finding that the statutes establishing programs designed to support low-wage workers cannot be denied on grounds extraneous to the programs’ eligibility criteria.

‘Policy of exclusion in search of a justification’: Trump’s Public Charge Rule

In its final rule redefining “public charge,” published on August 14, Trump’s Dept. of Homeland Security noted that since 1999, “’public charge’ has been interpreted to mean a person who is “primarily dependent on the Government for subsistence, as demonstrated by either the receipt of public cash assistance for income maintenance or institutionalization for long-term care at Government expense.” The revised rule “redefines the term “public charge” to mean an alien who receives one or more designated public benefits for more than 12 months in the aggregate within any 36-month period.” The designated benefits include the Supplemental Nutrition Assistance Program (SNAP), Medicaid and housing assistance.

The premise justifying Trump’s changes to the public charge rule – that immigrants use a disproportionate amount of public aid and so place a burden on citizen taxpayers – is belied by the facts. As reported by the libertarian Cato Institute, “The average value of welfare benefits per immigrant was about $3,718 in 2016, about 39 percent less than the $6,081 average value of welfare benefits per native” – mainly because immigrants don’t collect as much in Social Security and Medicare, though they do access slightly more means tested benefits like Medicaid and food stamps per person. While immigrants are heavily represented in some low wage jobs such as home healthcare, they are also strongly represented in some professional jobs, such as software development and medicine.

Twenty-one states plus the District of Columbia filed suit to block the updated rule on grounds that it discriminates against low-income people from developing countries and would harm children. Federal judges in Washington, California and New York agreed in October rulings blocking implementation.

In the New York case, Judge George B. Daniels held that the Trump administration was changing the plain statutory and common law definition of “public charge” – “which has never been understood to mean receipt of 12 months of benefits within a 36-month period.” Judge Daniels rebuked the administration’s motives and asserted rationale for the change: “The rule is simply a new agency policy of exclusion in search of a justification. It is repugnant to the American Dream of the opportunity for prosperity and success through hard work and upward mobility. Immigrants have always come to the country seeking a better life for themselves and their posterity. With or without help, most succeed.”

Though it may never go into effect, the amended public charge rule has already had a chilling effect on immigrant use of services. In a 2019 Urban Institute survey of immigrant adults, about one in seven reported avoiding public benefit programs for fear of risking future green card status.

What the public charge rule attempts to do to immigrants, HHS’s guidance encouraging states to impose work requirements on Medicaid recipients does to the working poor: discourage enrollment. It is in large part a conservative reaction to the ACA’s Medicaid expansion, implemented so far by 34 states, which extends Medicaid eligibility to any citizen (and some legal immigrants) with an income up to 138% of the federal poverty level. The premise is that “able-bodied” Medicaid recipients should work, notwithstanding that low-income and part-time jobs generally do not provide health insurance or render it affordable.

States with approved waivers to impose work requirements have generally also imposed onerous reporting requirements, often online-only, and seemingly designed to confuse and stymie people with limited online access or computer literacy. In Arkansas, where work requirements went into effect in June 2018, 18,000 enrollees lost coverage before the rule was blocked by a federal court in March of this year. While the rule was in effect, the Wall Street Journal reported:

Many users said the online portal to submit activity hours was difficult to navigate, and some beneficiaries didn’t have computers or a way to report the information online. Those needing assistance could call a helpline, but often faced lengthy waits, according to studies … In February, more than 80% of some 15,000 Arkansas Works enrollees required to report work activities to the state didn’t do so. [A large percentage were unaware of the requirement.]

Medicaid work requirements are a remedy in search of a problem. The Kaiser Family Foundation has demonstrated that virtually all so-called “able-bodied” Medicaid recipients either work or are full-time care-givers, students, or unable to work:

Overall, more than six in ten (63%) non-dual, non-SSI, non-elderly adults with Medicaid … are working either full or part-time … Caregiving responsibilities or school attendance were other leading reasons reported for not working. The remaining seven percent of Medicaid adults report that they are retired, unable to find work, or not working for another reason.

Judge Boasberg ruled that the approved waiver conflicts with Medicaid’s mission. Boasberg wrote that the Secretary of HHS “never adequately considered whether Kentucky HEALTH would, in fact, help the state furnish medical assistance to its citizens, a central objective of Medicaid. This signal omission renders his determination arbitrary and capricious. The Court, consequently, will vacate the approval of Kentucky’s project and remand the matter to HHS for further review.”

This past March, Judge Boasberg had the damage inflicted by the Arkansas waiver to chew on as he struck down both the Arkansas program and a revised Kentucky waiver. His decision staying the Arkansas program chronicles the harm wrought on plaintiffs who lost or stood to lose coverage under the program and concludes that as in Kentucky, “HHS had not adequately considered whether the program would in fact help the state furnish medical assistance to its citizens, a central objective of Medicaid.”

‘Individual mandate’ for visa applicants: Court challenges sure to come

Trump’s proclamation requiring visa applicants to show that they will have health insurance within 30 days of entry could bar almost two-thirds of prospective immigrants who would be admitted under current law, according to an analysis by the Migration Policy Institute cited in Vox. The Institute estimates that 34% of recent green card recipients are uninsured, and 31% have other healthcare benefits that wouldn’t qualify.

The proclamation has a particularly absurdist aspect, in that it bars prospective immigrants from citing subsidized ACA marketplace coverage to which they would be entitled as legally present non-citizens. It pushes those who do not have access to employer-sponsored insurance into the lightly regulated short-term market, in which pre-existing conditions can be excluded from coverage and those with health problems can be charged higher premiums.

The proclamation is certain to be challenged in court. Writing before the decisions blocking the public charge rule came down, law professor Peter Margulies argued in the Lawfare blog that the proclamation is more vulnerable to challenge than the public charge rule, in that it uses only one criterion to determine whether an immigrant is likely to become a financial burden. Further, it bypassed the notice-and-comment and other due diligence required of administrative rules:

While the proclamation was introduced under the rubric of national security, and so does not technically require an interagency process, Margulies notes that no national security rationale is cited as justification. Thus it is likely vulnerable to challenge.

So far, the courts are doing their job, blocking Trump’s administrative assaults on federal benefits designed by statute to provide vital services to citizens and legally present non-citizens who meet their eligibility criteria. Whether that defense will hold through further legal challenge, or through the full course of Trump’s presidency – however long or short that may be – remains to be seen.

Andrew Sprung is a freelance writer who blogs about politics and policy, particularly healthcare policy, at xpostfactoid. His articles about the rollout of the Affordable Care Act have appeared in The Atlantic and The New Republic. He is the winner of the National Institute of Health Care Management’s 2016 Digital Media Award. He holds a Ph.D. in English literature from the University of Rochester.