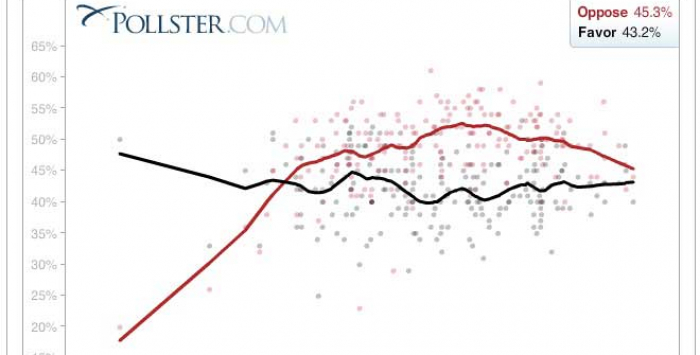 If you listen to John Boehner, health reform is not only completely abhorrent to the critics who pummeled it for months on end, but it’s now also uniformly despised by everyone, everywhere.

But it’s definitely not uniformly despised, judging by the looks of this nifty chart from Pollster. If anything, the chart shows that people are liking health reform more and more as its provisions take effect.

Since the very beginning, we’ve thought a huge chunk of the American public was squarely on the fence: wanting some kind of health reform but fearing that too much health reform would take our stinking economy even deeper into the abyss. But the public was also on the fence because the provisions just weren’t explained very well, or maybe not simply enough, or perhaps explained way too much (in an information overload kind of way).

We predict the black arrow will continue to swing upward as folks start to appreciate the provisions of the bill – and after fear of the unknown dissipates (as we know more about the unknowns of the legislation).

But the bottom line here is that the direction of the red line says pretty clearly: health reform is being hated less.