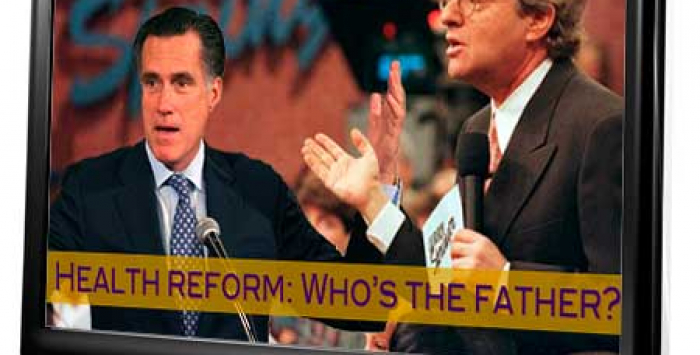 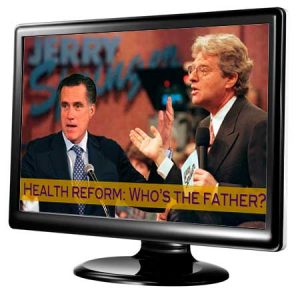 Will the REAL father of health reform please stand up?

We always love when politicians make witty jabs and then later get jabbed back. We love it, especially, when they’re jabbing health reform.

Mitt Romney’s feeling a return jab right now. The GOP Presidential contender wisecracked in the spring that President Obama was giving Romney way too much credit for helping set the stage for national health reform.

“He does me the great favor of saying that I was the inspiration of his plan. If that’s the case, why didn’t you call me?” Mr. Romney said.

Maybe Romney thought no one was paying attention. If so, he was wrong, because this week, everyone’s talking about Michael Isikoff’s bombshell that reveals the White House not only used Romney’s legislation as a blueprint for the ACA, but that Romney’s advisors met with senior Obama officials more than a dozen times in 2009.

So maybe Romney wasn’t chatting up President Obama about how to adapt the Massachusetts plan to address the nation’s health care issues, but it turns out that his peeps were over at the White House with the POTUS. As Isikoff writes:

One of those meetings, on July 20, 2009, was in the Oval Office and presided over by President Barack Obama, the records show.

It’s not a happy development for Romney, who has repeatedly defended his own legislation but vigorously opposed the ACA, threatening to repeal Obamacare “on day one of my administration.” Romney will have to refute the similarities between Romneycare and Obamacare at future debates, and – we predict – it will turn hardcore Obamacare haters into Romney haters.

Is Romney the Father of Health Reform? Maybe we should all give him the benefit of the doubt that he never intended his legislation to inspire the sweeping legislation that stands to helps millions of Americans get affordable, quality health insurance.

Still, it’s more obvious now than ever that Obamacare is either Romneycare all grown up – or maybe it’s just a chip off the old block.