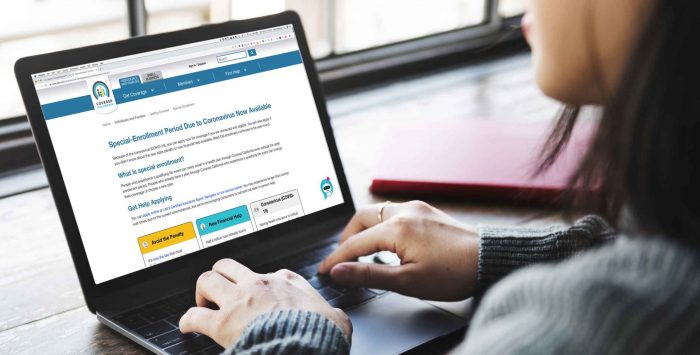 Twelve of the 13 fully state-run health insurance exchanges are currently allowing uninsured residents to enroll in health coverage. In DC, the special enrollment period depends on when a person files their district tax return; in the others, the deadlines vary.

But even before the unemployment rate started to spike as a result of the pandemic, there were millions of uninsured people in the United States. And in most cases, they don’t have a qualifying event that will allow them to obtain coverage. If they’re in a state with a COVID-19 special enrollment period, they can enroll now. But if they’re in a state that uses HealthCare.gov, they cannot.

For several weeks, governors in some of those states have been asking the Trump administration to open a special enrollment period on HealthCare.gov. This week, 12 of them sent a letter to HHS, reiterating that request. All 12 governors are Democrats, but GOP governors in New Hampshire and Arizona have made similar requests.

Your Health Idaho is the only fully state-run exchange that has not opened up a COVID-19 special enrollment period for uninsured residents. But a recent op-ed by Pat Kelly, Executive Director of Your Health Idaho, explains that the exchange is relaxing the documentation rules for people who are losing their employer-sponsored health insurance amid the pandemic. Normally, people in that situation have to submit official proof of their loss of coverage, but Kelly notes that applicants are now allowed to simply submit a written statement explaining that they lost, or will soon lose, employer-sponsored coverage.

Florida’s Children’s Health Insurance Program, Florida KidCare, used to have a lifetime benefit cap of $1 million per covered child. But last week, Gov. Ron DeSantis signed SB348 into law, repealing the lifetime benefit cap. Across the country, CHIP is providing health coverage to kids in families that are losing their employer-sponsored health coverage amid the COVID-19 pandemic. CHIP has different names in different states, is sometimes combined with Medicaid, and has income limits that vary by state. But in every state, kids are eligible for Medicaid or CHIP at higher household income levels than the Medicaid eligibility limits for adults.

Oklahoma voters will have a chance to vote on Medicaid expansion this year, but Gov. Kevin Stitt still hasn’t announced whether the measure will be on the primary ballot in June or the November ballot. Instead, Stitt is pushing an alternative approach, dubbed SoonerCare 2.0. It calls for Medicaid expansion in Oklahoma starting this summer, in July 2020.

But the state would simultaneously be seeking federal approval for new programs that would take effect in the summer of 2021, including a Medicaid work requirement, premiums for Medicaid expansion enrollees, a waiver of retroactive coverage requirements, and a per-capita spending cap. These provisions would essentially serve to reduce the number of people eligible for coverage, and Medicaid work requirements have already proven to be costly and administratively difficult, and have been overturned in court in several other states.

Earlier this month, we told you about several health care reform bills that had been passed by lawmakers in Virginia. Last week, Gov. Ralph Northam signed most of them into law.

Gov. Northam did not, however, sign HB795 and SB235 into law. These bills would have allowed self-employed Virginians to join association health plans (although it was doubtful that would have worked within the constraints of the 1332 waiver that lawmakers had hoped to use). But the governor sent the bills back to the legislature with a recommendation that the provisions not take effect unless they’re reenacted during next year’s legislative session.

Last week, we told you about the Louisiana Association of Health Plan’s decision to legally challenge the Louisiana Department of Insurance over the rules the Department has implemented in an effort to address the COVID-19 pandemic. But that decision is far from a unanimous representation of the insurers that were part of the LAHP.  At least three LAHP member insurers are opposed to the association’s lawsuit, and two of them have dropped out the Louisiana Association of Health Plans as a result. Aetna and WellCare have both left the Association, and while Humana continues to be a member, the insurer has publicly said that it does not support the legal action against the Louisiana Department of Insurance.