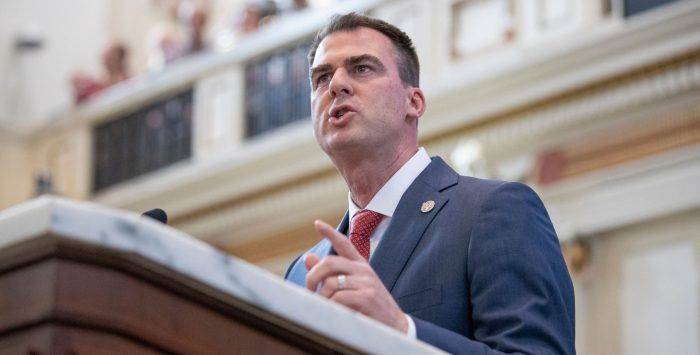 Oklahoma Gov. Kevin Stitt has declared that a ballot initiative to expand Medicaid will appear on the state's June 30 primary ballot. | Photo by Alonzo Adams/AP/Shutterstock

As the COVID-19 pandemic continues to dominate American life, health insurance and access to healthcare are on everyone’s minds. Special enrollment periods for uninsured residents are still ongoing in nine states and the District of Columbia. Similar enrollment windows ended last week in Connecticut and yesterday in Minnesota, but residents in those states can still enroll in health plans if they have a qualifying event. And in every state, Medicaid and CHIP enrollment are available year-round.

Colorado and Rhode Island are the next states where the exchange enrollment windows for uninsured residents will end. Both are currently scheduled to close on April 30.

Although the federal government has not opened up a special enrollment period for uninsured Americans in the 38 states that use HealthCare.gov, people in those states who lose their employer-sponsored health coverage are eligible for a special enrollment period triggered by the loss of coverage. (This is always the case; it’s not related to the COVID-19 pandemic.) And for the time being, HealthCare.gov is not requiring the normal documentation to prove that a person is losing their health coverage; applicants can simply attest to that fact during the enrollment process. The change in documentation requirements is discussed at the 30:50 mark in this webinar for enrollment assisters.

The webinar doesn’t specifically clarify that the relaxed documentation rules only apply to the special enrollment period triggered by loss of coverage, but even in a normal year, that’s the most commonly used qualifying event. In the midst of the widespread job losses caused by the COVID-19 pandemic, loss of coverage accounts for the vast majority of the people who are eligible for special enrollment periods through the marketplace.

It’s also worth noting that in states where major disaster declarations have been declared by FEMA (which currently includes the entire country), people who already qualified for a special enrollment period are allowed additional time to enroll in a plan through the exchange. This is a rule that was already in place, but it could help in situations where a person loses coverage – or qualifies for a special enrollment period as a result of another qualifying life event – and doesn’t get their application submitted within the normal 60-day window.

Oklahoma is one of a dwindling minority of states that have not yet accepted federal funding to expand Medicaid. Last fall, advocates gathered more than enough signatures to get a Medicaid expansion initiative (State Question 802) on the state ballot in 2020, but it was up to Gov. Kevin Stitt – who opposes the ballot initiative – to determine whether the initiative would appear on the general election ballot in November, or the primary election ballot in June. Last week, Stitt determined that State Question 802 would appear on the June 30 primary ballot.

But Stitt’s administration plans to expand Medicaid in Oklahoma as of July 1, 2020 – the day after the primary election – under the state’s SoonerCare 2.0 proposal. There’s a catch though: SoonerCare 2.0 includes a waiver proposal that Oklahoma submitted to CMS earlier this week, calling for a variety of restrictions to be added to the Medicaid expansion program in July 2021, including premiums and a Medicaid work requirement. If State Question 802 is approved by voters, Medicaid expansion in Oklahoma would proceed as called for under the ACA, without the SoonerCare 2.0 proposal. If the question fails to pass, the implementation of the SoonerCare 2.0 provisions will depend on what aspects of the proposal are approved by the Trump administration.

Although many insurers nationwide have voluntarily agreed to waive cost-sharing for COVID-19 treatment, federal regulations only require health plans to waive cost-sharing for testing. Treatment, including hospitalization if necessary, can be a much more expensive scenario that would tend to require patients to meet their health plan’s out-of-pocket maximum for the year. States can step in, however, in order to require state-regulated health insurers to waive cost sharing for COVID-19 treatment. Vermont did so last week, in an emergency regulation that applies to all state-regulated health insurers. The regulation is retroactive to March 13, when Vermont Gov. Phil Scott declared an emergency.

A new law took effect this year in New Mexico to protect consumers from surprise balance billing in emergencies or situations when they are treated by out-of-network providers at in-network facilities. This week, New Mexico issued an insurance bulletin in relation to COVID-19 and surprise balance billing, clarifying that New Mexico residents can obtain testing and treatment for COVID-19 without cost-sharing, even in situations where the patient has no choice but to see an out-of-network provider. (New Mexico had already issued guidance requiring state-regulated health plans to waive cost-sharing for COVID-19 treatment. The latest bulletin expands on that to address scenarios that could otherwise result in surprise balance billing.) States do not have regulatory authority over self-insured employer-sponsored plans, but New Mexico’s Superintendent of Insurance, Russell Toal, is working to ensure that anyone with coverage that is regulated by the state will not face financial barriers to testing or treatment for COVID-19.

Idaho is the only state with a fully state-run exchange that has not opened up a COVID-19 enrollment window for uninsured residents. The state has noted, however, that it has a somewhat unique situation, because “enhanced” short-term health plans are available for purchase in Idaho. These plans, which are available in 2020 from SelectHealth and Blue Cross of Idaho, are much more robust than traditional short-term health plans. But unlike ACA-compliant health plans, they can still impose waiting periods for pre-existing conditions.