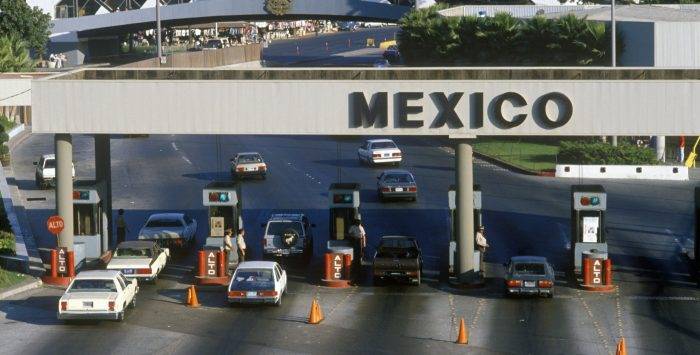 Utah state employees who take high-cost specialty drugs are being given the option of traveling to Mexico in order to obtain their drugs at a much lower cost – and the state is reimbursing them for travel expenses. | USA-Mexico border image from Shutterstock

Open enrollment for self-purchased health insurance has ended nationwide. (It starts again in November, for coverage effective in 2021). But if you’re in Washington, DC and you find out about the District’s individual mandate when you file your 2019 tax return – because you owe a penalty for being uninsured last year – DC Health Link is granting a one-time 60-day special enrollment period that will allow you to sign up for 2020 coverage and avoid having to pay another penalty on your tax return next year.

Last month, we told you about legislation under consideration in Virginia to sharply limit short-term health plans. Both chambers have now passed their respective legislation, bringing Virginia one step closer to being among the states with strict limits on short-term plans.

Virginia moves a step closer toward a state-run exchange

Virginia’s Senate has also passed bipartisan legislation that calls for the state to create a state-run health insurance exchange that would be operational by 2023. There are 13 fully state-run exchanges as of 2020, but Virginia is one of several states considering the possibility of transitioning away from HealthCare.gov in the coming years and establishing a state-run exchange platform instead.

Nebraska’s Department of Health and Human Services has indicated that the state is on track to meet the long-planned October 1 start date for Medicaid expansion. But legislation has also been introduced to codify that date as a hard deadline for the expanded eligibility rules to take effect.

Last fall, Georgia unveiled 1332 and 1115 waivers designed to make radical changes to its health insurance market and Medicaid program. But while some aspects of the state’s proposal are controversial, one provision – reinsurance – is not. A dozen states have already implemented reinsurance programs, which bring down pre-subsidy premiums across the individual insurance market, making coverage more affordable for people who don’t get subsidies. (It can have the opposite effect for people who do get subsidies, depending on the market dynamics in the area.)

Medicaid expansion legislation was filed in Wyoming last month, after receiving approval from a legislative committee last fall. But despite strong support from the state’s medical providers and medical students at the University of Wyoming, the legislation died in committee this week, on the first day of the legislative session.

The bill would not have called for Medicaid expansion exactly as it’s defined under the ACA, but would have given the governor the authority to work with CMS to “explore options” for expanding coverage. Lawmakers in the state have long said that they want a Wyoming-specific solution, and the bill that died on Monday would have given the governor leeway to craft Medicaid expansion in a state-specific way.

Another expansion bill might still be introduced this week, however, so Wyoming is still a state to watch for Medicaid expansion legislation in the 2020 session.

As the Texas v. Azar lawsuit winds its way through the court system, Arizona is the latest plaintiff state scrambling to try to craft a solution for state residents, in case the lawsuit the state is backing is successful. (Yes, the irony is strong.) GOP lawmakers in Arizona have introduced legislation ostensibly designed to protect people with pre-existing conditions – and at first glance, it might appear to do that. The bill would prohibit individual-market insurers from rejecting applicants based on their medical history or imposing pre-existing condition exclusions, both of which were common practices prior to the ACA.

But that is all the bill would do. It would not prevent insurers from basing premiums on applicants’ medical history, nor would it lock in any of the ACA’s other consumer protections. Democrats in Arizona have introduced a stronger version of legislation to protect state residents from the possibility of the ACA being overturned, but the elephant in the room is the loss of federal funding that would result if the ACA is eventually ruled unconstitutional. Without federal funding for premium subsidies and Medicaid expansion, it’s very unlikely that states could maintain anything even close to the current level of health care coverage and affordability.

Tennessee has not yet expanded Medicaid, although the state is seeking federal approval for a Medicaid work requirement and block grant funding. But bills have been introduced – with bipartisan support – that would get the ball rolling on Medicaid expansion in Tennessee. The legislation – introduced in both the House and Senate – calls for the state to submit a waiver proposal to CMS in order to expand Medicaid as called for in the state’s previously considered Insure Tennessee proposal. But they clarify that the state would also continue to seek federal approval for the work requirement and block grant funding.

This fascinating story by the Salt Lake Tribune’s Erin Alberty is a must-read. Utah government employees who take one of 13 high-cost specialty drugs are given the option of traveling to Mexico – or Canada – in order to obtain their drugs at a much lower cost. The state pays all of their travel expenses and gives them an extra $500 if they choose to get their medications outside the U.S. So far, ten employees have taken Utah up on the offer, saving the state employee health plan $225,000.