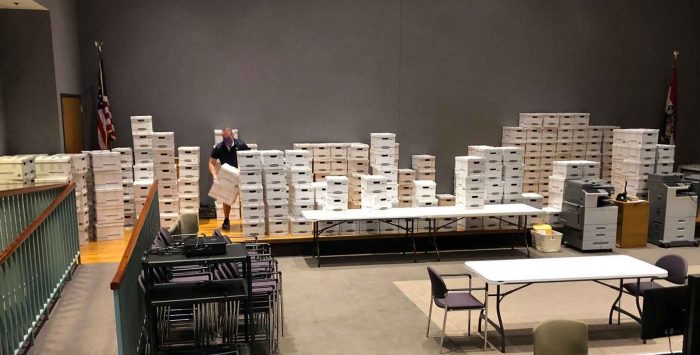 The YesOn2 campaign collected 350,000 signed petitions to put a vote on Medicaid expansion on the Missouri primary ballot. Voters approved the expansion in Tuesday's election. | Image courtesy of Healthcare for Missouri

Voters in Missouri approved Amendment 2 yesterday, which will expand Medicaid eligibility in the state to cover adults up to age 64 with income up to 138 percent of the poverty level (a little under $18,000/year for a single person). The amendment calls for Medicaid expansion to take effect in Missouri as of July 2021. For the last several years, Republican lawmakers in Missouri have rejected federal funding to expand Medicaid, but voters approved the amendment by a margin of about 53-47. Oklahoma voters approved a similar measure in June, and four other states – Maine, Utah, Idaho, and Nebraska – have approved Medicaid expansion ballot measures in previous elections.

Colorado’s eight individual market insurers – all of which offer coverage in Colorado’s state-run health insurance marketplace – have proposed an overall average rate increase of about 2 percent for 2021, with proposals that range from a decrease of about 12 percent to an increase of about 6 percent. Two of the insurers – Bright Health and Rocky Mountain Health Plans – are expanding their coverage areas for 2021. This year, Colorado has 22 counties where only a single insurer offers plans in the exchange; that will drop to 10 counties next year.

The Arkansas health insurance marketplace currently has four insurers offering plans, although three of them are part of the Centene/Ambetter family. For 2021, two new insurers – Oscar and Health Advantage – have filed plans to join the individual market in the state and offer plans in the exchange. Health Advantage is an affiliate of Arkansas Blue Cross and Blue Shield, as is one of the existing exchange insurers, USAble Mutual.

Last week, we told you about New Jersey legislation designed to replace the federal health insurance tax with a state assessment to generate revenue that will be used to make individual health insurance more affordable in New Jersey. A few days later, and only about three weeks after it had been introduced, the legislation was signed into law by Governor Phil Murphy.

The new law will allow the state to continue its successful reinsurance program, and also provide additional premium subsidies to exchange enrollees with income up to 400 percent of the poverty level. These enrollees already get federal subsidies to offset the cost of their health insurance, but the additional subsidies will make coverage more affordable and make it more realistic for people to purchase more robust coverage that will limit their out-of-pocket exposure when they need medical services. The state-based subsidies will be available for next year’s coverage, which can be purchased starting November 1.

Across 18 states and nearly 5 million enrollees, proposed average rate increase of about 2% for 2021

At ACA Signups, Charles Gaba is tracking average proposed health insurance premium changes for 2021 in an at-a-glance format. Across 18 states where individual market rate filings have been made public – accounting for nearly 5 million enrollees – Gaba has calculated a weighted average proposed rate increase of just over 2 percent. This could still change as the summer goes on, with more states being added, regulators weighing in on the proposed rates, and the constantly evolving impact of COVID-19. But for now, it’s shaping up to be another year of mostly modest overall rate changes in the individual market.

Oscar, which currently offers individual market coverage in 14 states, is once again expanding its coverage area for 2021. Oscar’s individual and family health plans will be newly available in select metropolitan areas in Arkansas, Iowa, North Carolina, and Oklahoma. And the insurer will expand its existing coverage areas in Colorado, Florida, and Pennsylvania. Coverage area expansions are shaping up to be fairly widespread again this year, with Friday Health Plans, Bright Health, UnitedHealthcare and various regional insurers also entering new states, and numerous insurers expanding their existing coverage footprints within states.

Pennsylvania is among the states where short-term health plans are allowed to follow federal guidelines, although the state’s insurance commissioner has long been outspoken about the drawbacks of short-term health plans. Last week, bipartisan legislation was introduced in Pennsylvania’s House that would sharply restrict short-term plans. If enacted, the bill would limit short-term plans to 90 days and prohibit them from continuing into the coming year or taking effect in the year after they’re purchased. It would also impose a variety of other rules related to marketing, underwriting, and claims processing.