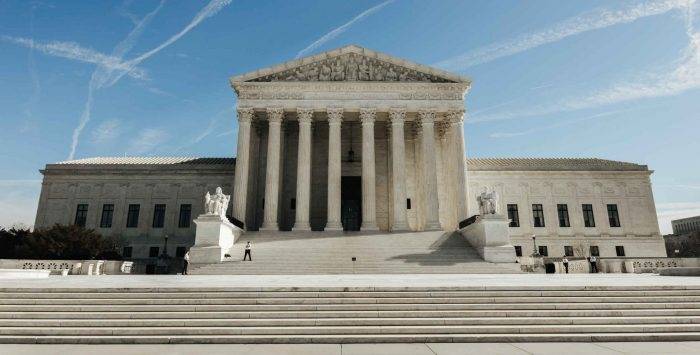 Last week, the Trump administration filed a brief with the United States Supreme Court, asking the Court to overturn the Affordable Care Act in its entirety. | Image: Supreme Court photo by Dennis / stock.adobe.com

It came down to only about 6,500 votes, but Medicaid expansion was approved by voters in Oklahoma this week, with 50.5 percent of voters agreeing that the state should expand Medicaid eligibility as called for under the Affordable Care Act. Under the terms of the ballot initiative, Medicaid eligibility will be extended to 138 percent of the federal poverty level no later than July 1, 2021. State lawmakers will now be tasked with coming up with the state’s portion of the funding. (Medicaid expansion is mostly funded by the federal government, but states are responsible for 10 percent of the cost).

Pennsylvania is in the process of transitioning to a fully state-run exchange that will be up and running this fall. Pennie – a clever moniker that derives from Pennsylvania Insurance Exchange – will also offer an extended open enrollment period that will run from November 1, 2020 to January 15, 2021. That’s a full month longer than open enrollment would have lasted if Pennsylvania had continued to use HealthCare.gov. Pennie already has 19 full-time employees and is working through the testing required to ensure a smooth transition for enrollees and insurers.

Maine has three insurers that offer individual-market plans. Two of the three have proposed average rate decreases for 2021, and the third has proposed a very slight (0.4 percent) increase. The three insurers have taken differing approaches to address COVID-19 in their cost projections for 2021, highlighting the uncertainty surrounding the virus and how it will affect our health care system in the months to come.

One of Maine’s insurers is projecting lower costs as a result of COVID-19, due to a continued avoidance of elective procedures amid the pandemic. Another is projecting higher costs due to an uptick in elective procedures that were delayed this year as a result of the pandemic, and the third insurer has not incorporated a COVID-19 factor in its rate filings.

Georgia’s legislature wrapped up their 2020 session last week, and sent numerous bills to Gov. Brian Kemp for his consideration. Among them are HB888 and HB1114, both of which passed with overwhelming bipartisan support.

HB888 will provide protections against surprise balance billing for Georgia consumers with state-regulated health insurance. Surprise balance billing happens when a patient inadvertently receives care from a medical provider who isn’t in the patient’s insurance network – either because the situation is an emergency, or because the patient seeks care at an in-network facility and doesn’t realize that out-of-network providers also practice there. This is an issue that federal legislation has not yet successfully addressed, and although numerous states have taken steps to address it on their own, state laws do not apply to self-insured group plans, which are regulated at the federal level instead.

HB1114 will extend postpartum Medicaid coverage for low-income women so that it lasts for six months in Georgia, instead of just two. The legislation will also provide for lactation support for new moms. The measure is an effort to address Georgia’s higher-than-average maternal mortality rates.

HealthCare.gov SEP enrollments increase 27% this year, but would be much higher with general COVID-19 special enrollment period

In recent weeks, we’ve shared updates on the COVID-19-related enrollment spikes in state-run health insurance exchanges and Medicaid, as well as the increasing enrollment volume seen by a web broker that helps people enroll through HealthCare.gov. But until last week, CMS had not shared any data about the total number of people enrolling via HealthCare.gov amid the pandemic.

CMS published an enrollment report last week, indicating that special enrollment period plan selections on HealthCare.gov through the end of May were up about 27 percent over last year, with roughly 188,000 more enrollments this year. But as Charles Gaba explains, HealthCare.gov would likely have had several hundred thousand more enrollees this spring if the Trump administration had opened up a general COVID-19 special enrollment period for uninsured residents, the way nearly all of the state-run exchanges did.

The Texas v. Azar (now known as California v. Texas) case heads to the Supreme Court during the upcoming term, with oral arguments likely to be heard sometime this fall. The future of the ACA hangs in the balance, as the case hinges on whether the rest of the ACA can stand without the individual mandate penalty, which was eliminated by Congress as of the end of 2018.

Last week, the Trump administration filed a brief with the Court, asking the justices to overturn the ACA in its entirety. The administration clarified that the Court could choose to leave some ACA provisions in place if they don’t harm the plaintiffs, but as Nicholas Bagley points out, the entire ACA would be eliminated if the Court rules that the law is inseparable from the individual mandate – meaning that there would be no provisions left to selectively enforce.

The administration’s brief was met with fierce condemnation from consumer advocates, insurance regulators, and Democratic lawmakers, who note that overturning the ACA would result in tens of millions of people losing their health insurance and pre-existing condition protections – a poor proposition in the best of times, and particularly onerous in the midst of a pandemic.